The same bedrock outcrop on Lopez Island that was glacially striated described HERE had other linear features: bedding and penetrative cleavage. It would be a betrayal of my metamorphic tribe not talk about this bedrock. 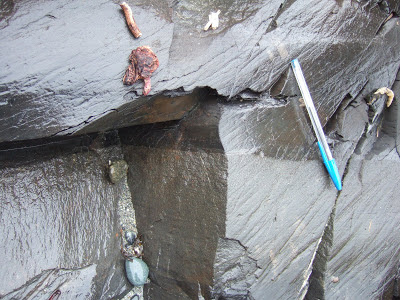 The protolith is what the rock was before it was metamorphosed. In this particular case the rock was a sandstone (lighter color) and a silt or mud stone (dark color).

These rocks were once buried very deeply, but oddly were not very heated. During the deep burial minerals in the sandstone and mud stone were squeezed and their atomic bonds were reshaped and realigned into new minerals - unfortunately not at a scale that can be seen at the outcrop scale but visible at the microscopic level. The microscopic metamorphic minerals include lawsonite, pumpellyite and aragonite. A mineral assemblage that indicates very high pressure (deep burial) but relatively low temperatures. Not a common assemblage as deep burial typically means hot as well. Some how these rocks were deeply buried yet not very heated up. This suggests that this ocean floor formation was thrust into a deep ocean trench and before they got heated up were rethrust up out of the deep burial.

Although the mineral assemblage can not be seen at the outcrop scale, the up side is the original sedimentary bedding within the rock can readily be seen. And the metamorphic cleavage can be seen crossing the bedding at an angle. The orientation of this particular outcrop is excellent for measuring both the bedding and cleavage orientation. 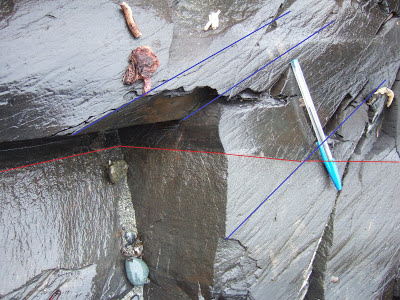 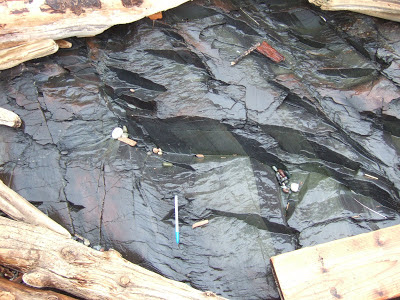 The above section of the outcrop provides a nice view of the bedding with fractured steps in the rock associated with the cleavage. The sedimentary beds are consistent with the unit being a distal turbidite with alternating silt stone and sandstone. Tubidites are a common ocean floor depositional feature from under water landslides traveling long distances from the failed slope via turbidity currents. 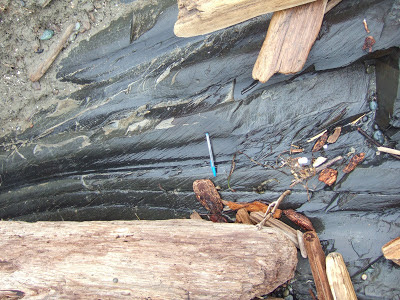 More cross cutting cleavage
This particular formation has been metamorphosed more than once. A lower pressure over print with some brittle deformation that created discrete openings filled with dissolution fluids forms another metamorphic fabrics in the formation. 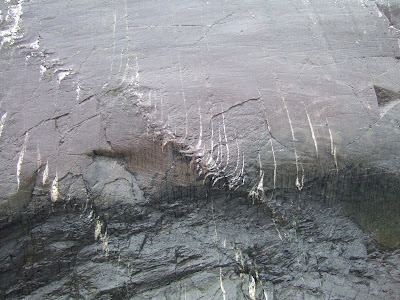 Pressure dissolution
This formation has several stories to tell. By no means are these stories easy to read. The San Juan Islands have the best outcrop exposures in western Washington, but the rocks exposed are enormously complex and the exact story of how the above turbidite sequence formed, was metamorphosed at high pressure and low temperature, and then ended up here has been a difficult challenge for geologists that have taken on the challenge of deciphering these rocks. Over the years some wildly divergent interpretations have been proposed. I only know enough to get confused and hurt my head over all I can't remember.
This outcrop was distraction from the work I was supposed to be doing that involved a much younger units. 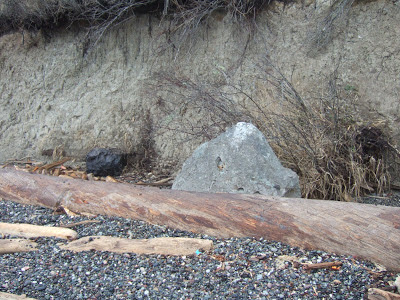 Glacial drift and shoreline processes at eroding bluff
Posted by Dan McShane at 9:09 AM