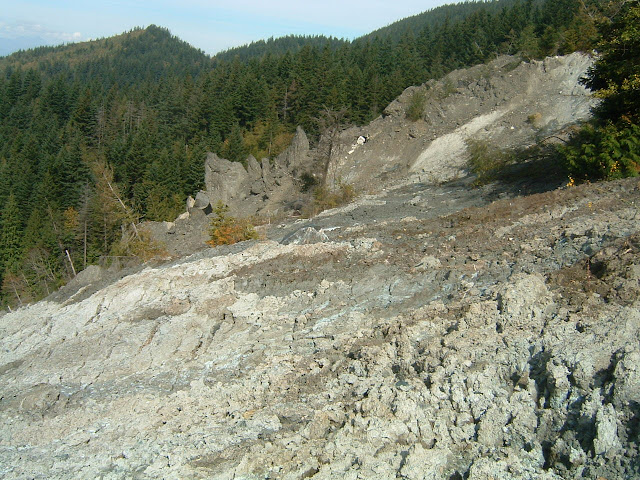 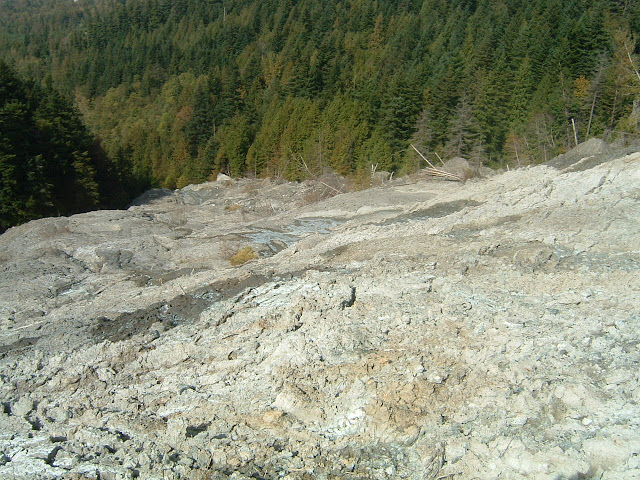 I have have been referring to the Swift Creek landslide on the west slope of Sumas Mountain as Whatcom County’s desert.

This is a deep-seated landslide that reactivated approximately 50 years ago. However, it has really sped up in the last ten years. It is a strange surface to walk across. The surface alters from hard and dry, slick and wet, very soft with areas where one can sink over knee deep with one step, to dry and dusty. Springs of water look like flowing milk.

The failure area is located within the contact between the overlying Huntingdon Formation and the underlying ultramafic rocks. The contact between these two rocks is spectacular in itself. The Huntingdon formation is a fluvial (river) deposit consisting primarily of conglomerate on the west side of Sumas Mountain. The deposit is approximately 45 million years old. The Huntingdon overlies ultramafite. Ultramafite means rocks high in magnesium and iron. These rocks were once part of deep ocean floor that was heavily metamorphosed by hot fluids deep below the surface. Somehow this slab of deep ocean floor was thrust up onto the margin of North America likely at least 100 million years ago. This formation is full of serpentine and contains a significant amount of asbestos and is in many locations very highly sheared from its fault emplacement. In addition, at a number of areas on Sumas Mountain the formation appears to have been deeply weathered prior to the deposition of the overlying Huntingdon with portions of the rock altered to clays. As such, the upper part of this formation is very weak.

The west side of Sumas Mountain has tilted the contact between the Huntingdon and ultramafite towards the west. This tilted contact has failed and a huge section of the mountain is sliding down towards the west.

There are other large deep-seated landslides associated with the ultamafite on Sumas Mountain. Ultramafite can be a notorious unstable rock type. But at the present time, the Swift Creek slide is the part of the Mountain that is most actively failing. The slide is actively expanding hundereds of feet upslope from the desert like area. The photos below show large fractures in the forest floor upslope from the active slide area. 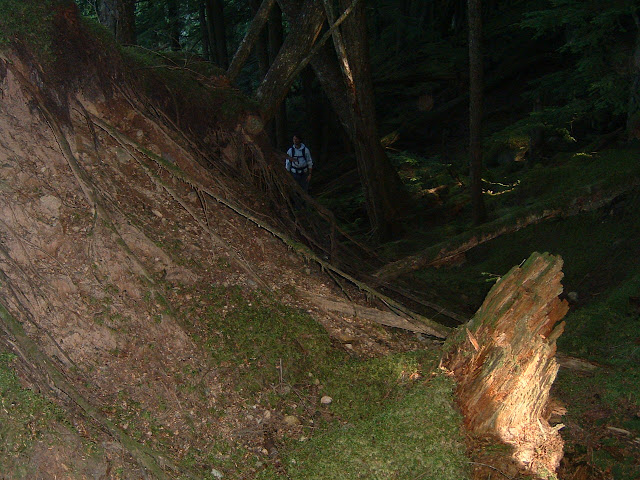 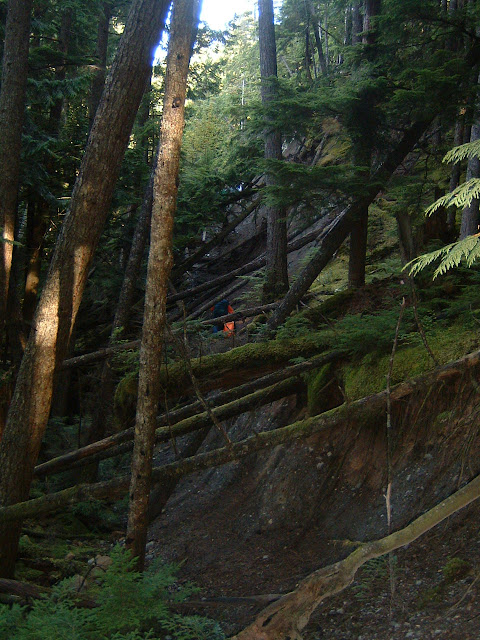 The slide is having huge downstream consequences for property owners below the slide area. The average volume of material that comes down Swift Creek is equivalent to a football field buried 50 feet deep every year. It is anticipated that this will be the case for the next 300 or more years.

Properties will be buried, roads closed and streams filled in. The sediment is full of asbestos and the Environmental Protection Agency has concluded that the sediment poses a risk to those exposed to the dust generated.

Note that very little plant life is growing on the active slide area. The soils derived from the freshly exposed ultamafite have unusual calcium and magnesium ratios that are toxic to most plants. In addition ultramafite is one of the few rock types that lack phosphorus bearing minerals. There are a few plants that have developed the ability to grow within the otherwise toxic to plants soil, but phosphorus is critical to all plant life and it will take some time for enough phosphorus to be deposited on the soil surface to support much in the way of plant life. Hence, Whatcom County has a small desert on the slopes of Sumas Mountain.

While a desert is located up on the slope of Sumas Mountain above Swift Creek, it should be anticipated that the plain below to the west will progressively become desert-like as the sediment covers the area. An interesting and difficult policy issue for the EPA, Washington State Department of Ecology, Whatcom County along with property owners and other agenicies.
Posted by Dan McShane at 5:08 PM 3 comments:

A Landscape Created by the Earthquake of 1700 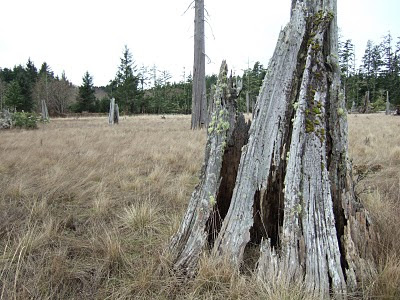 Dead western red cedars in salt marsh
The Washington State coast is located along a convergent plate boundary. The Juan de Fuca ocean plate is being subducted beneath the North American Continental plate. In other locations around the world some of the largest earthquakes ever recorded have taken place along similar convergent plate margins. However, since arrival of Europeans and Americans, no big quakes have been recorded along the coast. Tom Heaton and Garry Rogers proposed that the reason no large earthquakes had been recorded along the Washington coast was that the two plates were jammed and that when a quake did happen it would be very big.
Brain Atwater, a geologist with the USGS, went on a hunt for prehistoric evidence of large quakes. He found lots of evidence and the above photo is one piece of our landscape that looks the way it does because of a massive subduction zone earthquake.
Western red cedar does not like salt water. These trees grew in a fresh water environment until the land subsided and the area they were growing became a salt water tidal marsh. The trees have been age dated and died in approximately 1700. A tsunami recorded in Japan on January 27, 1700 matches very well with the evidence compiled by Atwater.
The standing cedars are a dramatic sight and cover a large area. Not as obvious, but equally impressive are that the banks of the tidal stream are lined with the stumps of drowned Sitka spruce. Sitka spruce can tolerate some salt, but not daily saturation. The spruce rot faster than the cedar so the only standing trees remaining are the cedar. A layer of sand blankets the old soil horizon from the tsunami wave that impacted the area immediately after the quake. 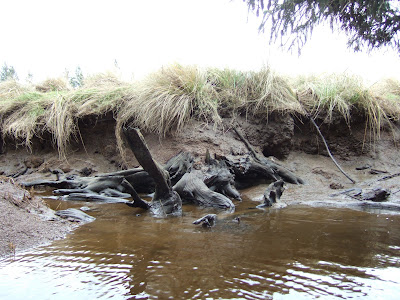 Sitka Spuce stump along stream bank
Atwater's work has explained a landscape that can be seen throughout the tidal marshes of the Pacific coast of Washington. But that sleuthing led to another landscape change along the Washington coast. Radio towers and warning sirens as well as tsunami escape route signs are now part of the landscape along our coastal areas.
Posted by Dan McShane at 10:18 AM 3 comments:

I travel all over Washington State assessing potential geology hazards. I try to read the landscape I am seeing. Why does the ground look the way it does? What does the vegetation say about the place I am visiting. Has the land been altered by historic uses? This blog will share my observations on my various explorations and ventures around Washington State and occasionally beyond.
Posted by Dan McShane at 6:19 PM 1 comment: