I had not visited the two large landslides in 4 years (https://www.opb.org/news/article), but thought taking a new look at them was warranted for a project. I have previously posted about Canyon Creek (canyon-creek-another-path-to-reducing-a-geologic-hazard  and earthfix-whatcom-countys-approach-to-landslide risk).

Geoff prepared a nice lidar view of the Jim Creek and Bald Mountain slides in the watershed using the 2017 DNR lidar - a much better resolution than what was previously available. 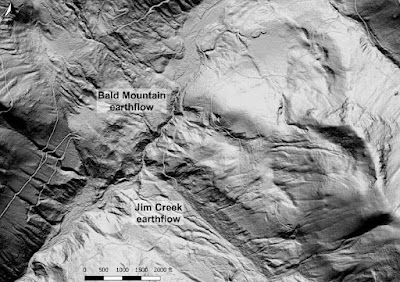 When discussing these two slides during a policy discussion, I was quoted in the newspaper as stating they "were slicker than snot".

Our venture to the slide area entailed navigating through the forested surface of the Jim Creek Slide from the Canyon Creek Road. 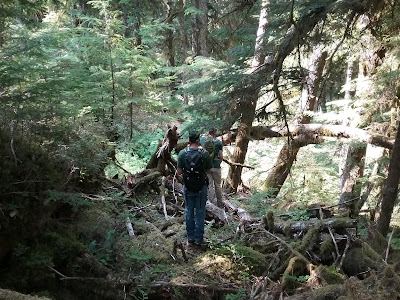 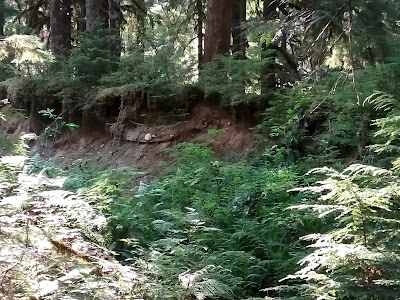 One of numerous fractures and slippage blocks on the slide surface

The lower part of the slide drops very steeply down to Canyon Creek. 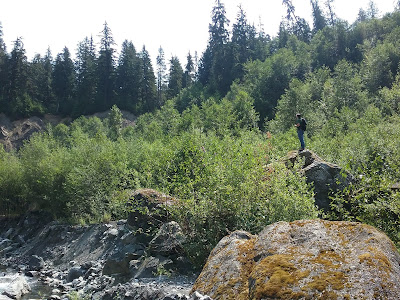 View of the Jim Creek slide from Canyon Creek 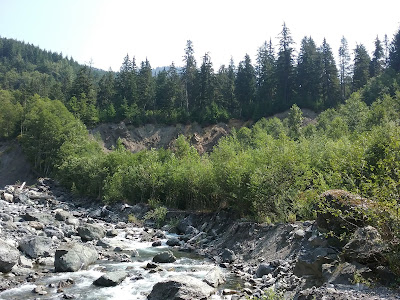 My last visit to the slide had been in 2014. The lower slope had greened up a bit since then with red alder trees. Prior to 2014 I had visited the slide in 2001 and 1995. In the early 2000s, there was an effort to keep the creek away from the to area of the slide. There was not a lot of that work to be seen except for a few boulders with cables that had been used to tie logs in place. 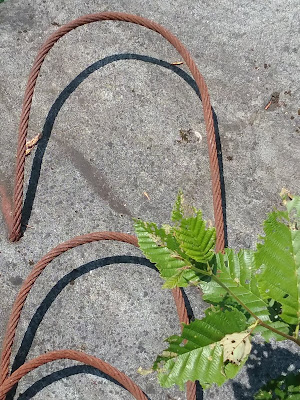 The view looking up stream shows the two slides on either side. 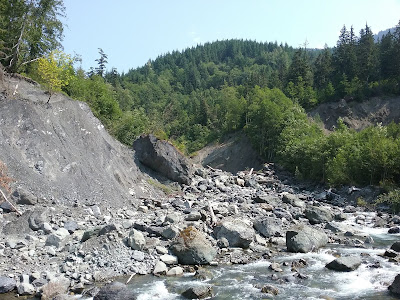 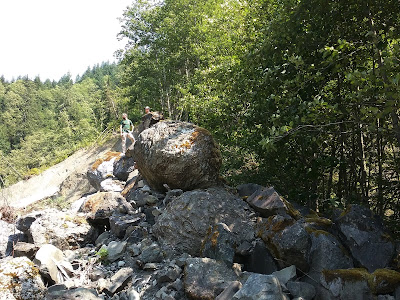 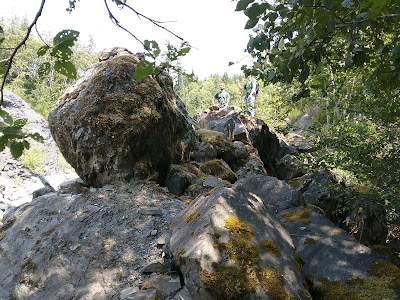 Since my initial trips to the slides, the Bald Mountain slide has become more active ravelly material into Canyon Creek. 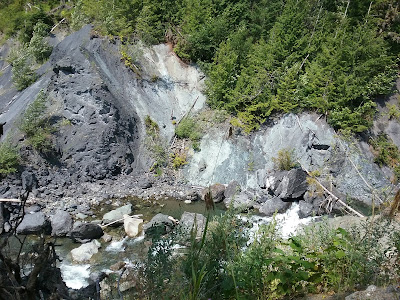 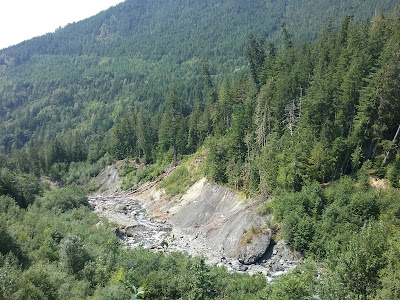 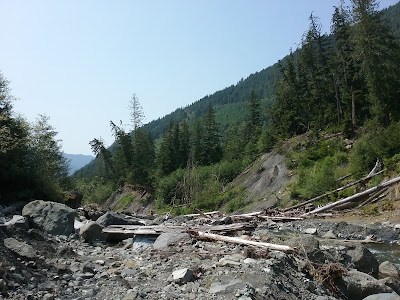 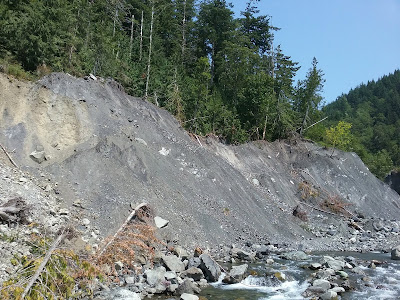 Toe of the Bald Mountain Slide 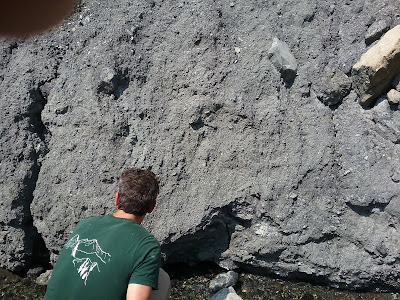 Geoff checking out the pulverized rock at base of slide

The Bald Mountain Slide is within bedrock of the Bell Pass Melange. These rocks were highly deformed and sheared during tectonic emplacement. Further faulting has also taken place along a contact zone between the Bell Pass rocks and the Chuckanut Formation. 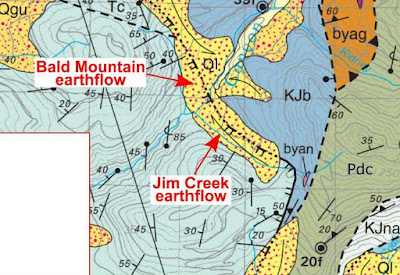 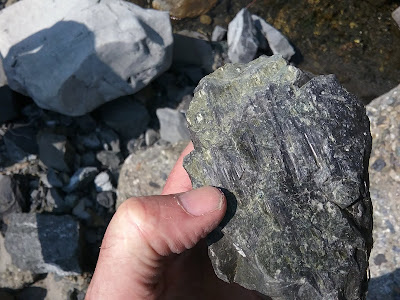 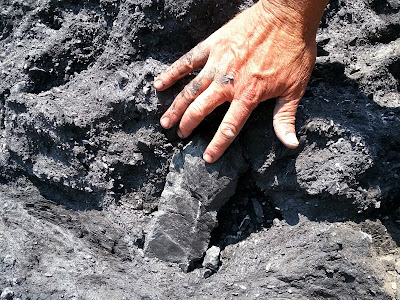 Both slides are underlain by rocks of the Bell Pass Melange. Tectonic shear zones in the melange are responsible for other large scale slide areas in Whatcom County.

Some more intact large boulders were present within the sheared up surrounding rock. 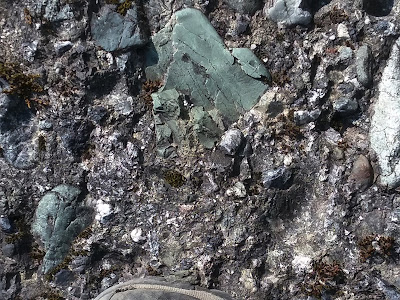 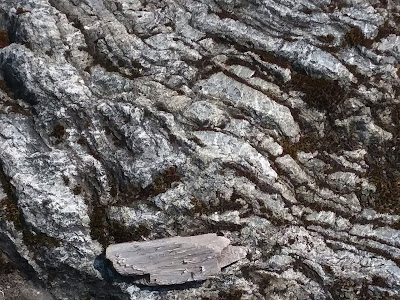 The Okanogan valley in north central Washington has been a bit smoke choked from fires in the North Cascades. 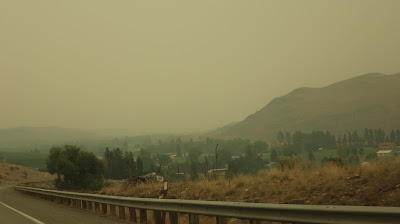 The valley has been shaped by glacial ice. The Okanogan ice lobe flowed down this valley to the Columbia Valley where it blocked the Columbia River and covered the northern half of the Waterville Plateau. As the ice retreated, ice margin terraces were formed along the valley sides and have been further enhanced by the erosion from the Okanogan River.

One of the terraces in Omak is used in a horse race. A race that Disney made famous with the movie Run Appaloosa Run. I visited the starting line area of the race that is still run as part of the Omak Stampede. 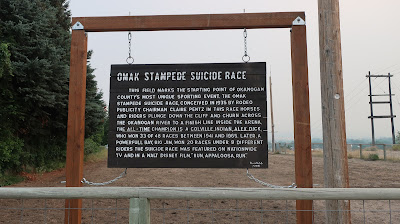 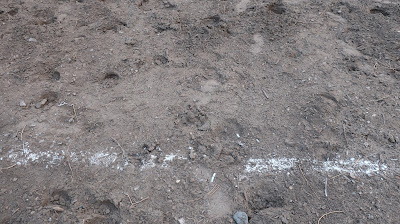 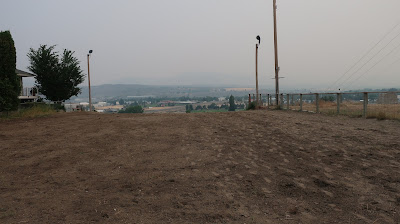 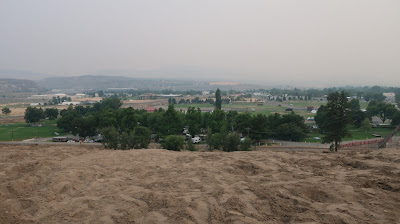 Approaching the edge of the terrace 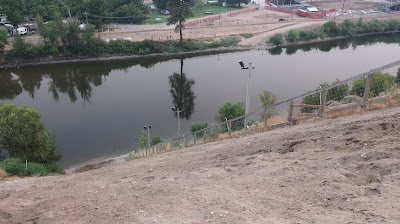 The plunge to the river 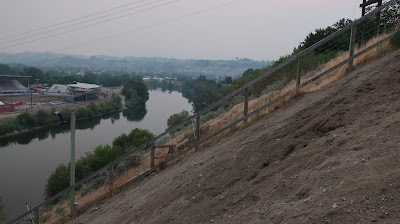 Getting a sense of the steepness of the Suicide Run slope 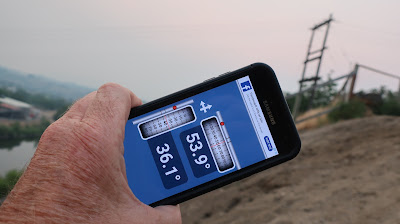 Galloping a horse down this slope into the river is hard to imagine. But it is an old tradition with deep cultural roots. It takes a special horse that can tolerate a steep run, a swim across a river, and lots of distractions.