I came across this partially completed painting in Milano, Stream of Humanity by Giuseppe Pellizza da Volpedo. I had seen this image before on a blog post by economist Brad DeLong that I riffed off of for a post We Are the 100%. 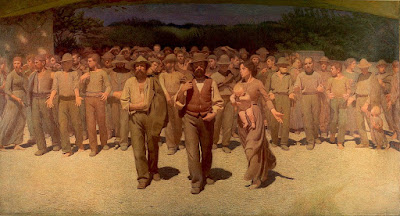 The painting I saw in Milano was an incomplete version of a better known final painting that Pellizza da Volpedo called The Fourth Estate, a painting of striking workers marching in the street. 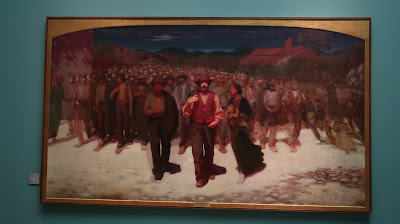 The City of Milano purchased The Fourth Estate in the 1920s and it subsequently has become a bit of an iconoclastic image used for showing the potential power of the working class. Hence, Brad DeLong used it with the term we are the 100%. If only more of the political class would follow this motto, we would all be a bit better off. But that requires the same of the voters. And perhaps it also requires empathy for the 100% as well.
Posted by Dan McShane at 8:58 AM No comments:

Book: All The Light We Cannot See

A pleasure of long distant travel is the time to dedicate to reading. A good novel while sitting in the middle seats of long flight makes the experience a bit more tolerable. I very much enjoyed the novel All the Light We Cannot See by Anthony Doerr. 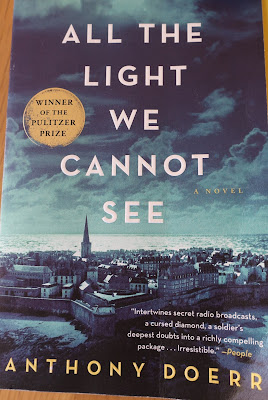 There was a period when I was always in the midst of reading a novel. That reading pattern has fallen off because unless a novel really grabs my mind I will give it up. This book easily broke through that stoppage. After the initial start on the plane, I found myself picking it up to read to the finish at every small opportunity.

The title is in reference to the electromagnetic spectrum. The story takes place in the run up and though WWII.

There was a line in the book that was used twice that in a way reminded me of my own science experience: "A scientist's work is determined by two things: his interests and those of his time".

Email ThisBlogThis!Share to TwitterShare to FacebookShare to Pinterest
Labels: books

Which volcano is this peak? 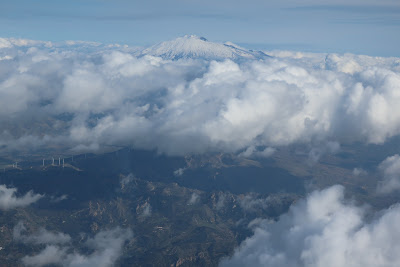 A hint is this small active volcano was observed a bit before. 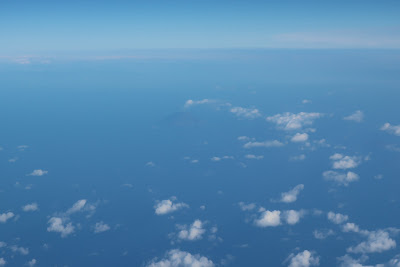 The answer is none of the above. The large volcano is Etna on the island of Sicily. The steaming island is Stromboli.

The flight and views makes one contemplate geologic risk and society in different circumstances. I was struck by the engineering that must have gone into the development of this valley. 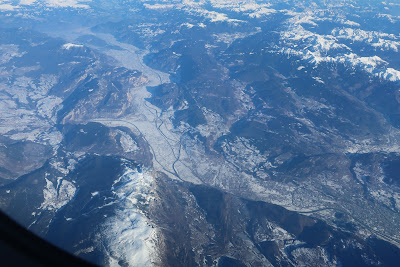 Posted by Dan McShane at 2:21 PM No comments:

A bit of non Washington time in Potsdam, Germany.

Geologists are not the only ones that appreciate a paragneiss that has partially melted. 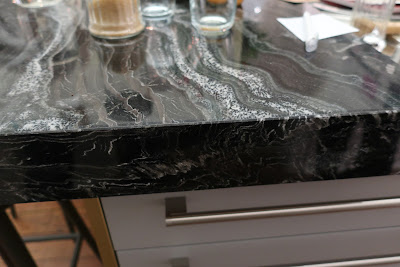 This stone counter top was one of several that were displayed in a friend's kitchen design studio. It can a bit tricky interpreting counter tops with little context as to the source of the stone. In this case the stone has been cut to emphasize what I believe are former sedimentary layers. Alternatively the layering could be from magma flow or cumulative layering. The counter edge shows that the counter top has been cut oblique to the layers and this the layers appear thicker than they really are on the counter top.

I enjoyed some a well curated political art exhibit. When Communists Dream by Walter Womacka was a favorite. It likely was viewed with approval by the former DDR government at the time. 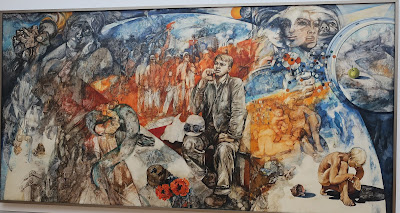 This sculpture of a well known theme was well rendered. 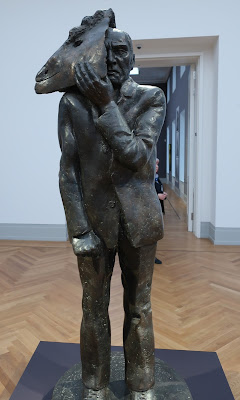 Political movements and the people caught up in them can be like herds of sheep. But there is within any political movement pressure to keep the mask on to fit in. Taking off the mask, one runs the risk of being found out as not part of the team. One can look at the person that breaks from the herd as a leader, but more often than not they are simply no longer in the herd, and in some circumstances the punishment for leaving the herd harsh.

This painting by A.R. Penck is interpreted as a declaration of autonomy. I can accept that, but mostly I simply liked it. 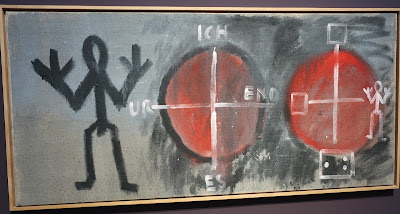 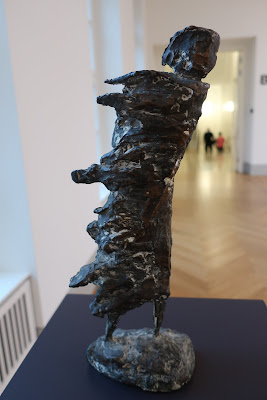 Posted by Dan McShane at 2:03 PM No comments:

Email ThisBlogThis!Share to TwitterShare to FacebookShare to Pinterest
Labels: Non-Washington

Taking a Break at Sinclair Inlet

I make it down to Sinclair Inlet for work a few times every year. The inlet is across Puget Sound from Seattle. Bremerton is on the north shore and Port Orchard is on the south shore. I took a break and walked out on the public dock in Port Orchard. The dock is a relatively new dock for public use. 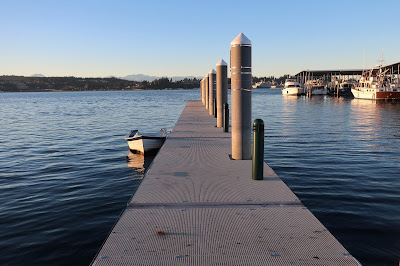 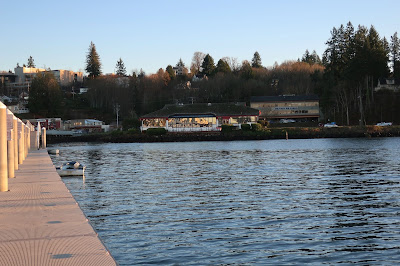 An interesting aspect of Port Orchard is it provides great views of the Naval Ship Yard. It is a busy place with ships lined up for maintenance and repairs. I always enjoy hearing the periodic revelry carrying across the water. 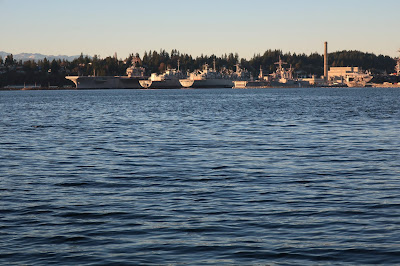 Posted by Dan McShane at 8:31 PM No comments:

Where the Cascades Touch the Sea

A northwest Washington point of pride in Whatcom County and Skagit County is noting that area on the border of the two counties is where the Cascade Mountains touch the sea. 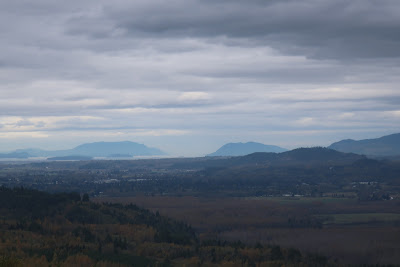 A range of low mountains extends west of the North Cascades in the area and reaches the Salish Sea. The range extends out into the San Juan Islands. The ridges and summits are relatively modest with summits near the water just under 3,000 feet with higher ridges inland and lower summits in the islands. Never the less the range forms a belt of rugged landscape that cuts across the otherwise continuous north-south Willamette-Puget lowlands that extend the entire length of the west side of the state.

Interstate 5 weaves through the range through a narrow low gap between Skagit County and Whatcom County. Another road, State Highway 11, or Chuckanut Drive, follows the coast at the base of Chuckanut Mountain along the shore of Samish Bay and Bellingham Bay. It ranks as one of the most scenic drives in the State and is a route I have never tired of. It also has lots of unstable slopes and rockfall hazards.

There is no formal name for the range and it really is a combination of uplifts and tectonics that overlap in a manner that does not brink out a distinct name. Locally the westernmost range that descends to the water at Chuckanut Drive and is passed across by I-5 is often called The Chuckanuts.

On a broader scale that incorporates the wider western extension of summits utilizes the term Northwest Cascades. I utilize that term more frequently as it gets at the distinct geology although extremely complex geology and can very reasonably be extended to cover the rugged peaks in the San Juan Islands. This more geologic term is extended to the east to the Straight Creek Fault, a major strike-slip fault with markedly different geologic units on the other side to the east where the core of the North Cascade Range begins.
Posted by Dan McShane at 4:06 PM No comments:

Coming across a berry snack while in the field in December is always a bit of pleasant diversion. 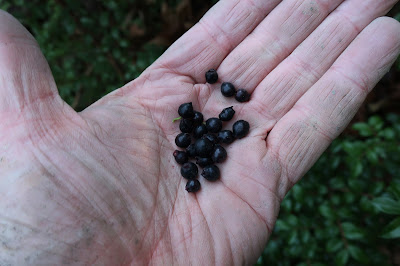 I do a fair bit of work on the east and north side of the Olympic Mountains. Vaccinium ovatum is not only common as an understory plant, it can be the predominant plant in some areas. 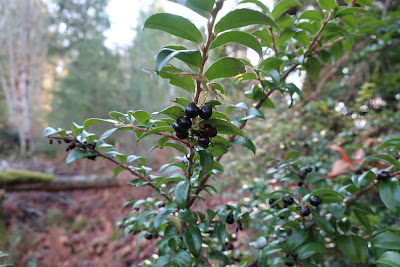 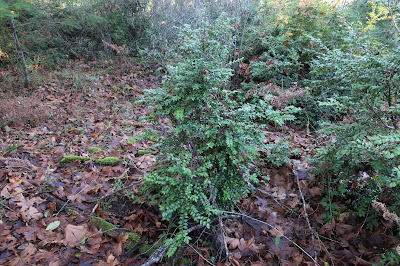 My sense is that the plant does like moist ground, but a good dry spell and warm summer air gives the plant an edge compared to others. The waxy leathery leaves suggest drought tolerance. The evergreen habit allows the plant to take in solar energy during the winter, another edge compared to plants that die back in the winter.
Posted by Dan McShane at 10:15 PM 2 comments: