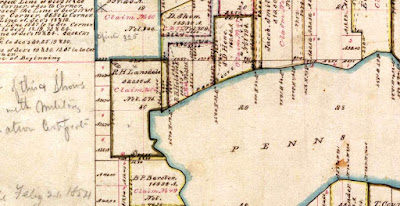 Doing a bit of deep dive into history for a project on Whidbey Island, I noted the RH Lansdale Claim on the northwest side of Penn Cove. Many of the land claims on Whidbey Island were from the Donation Land Claim Act passed by Congress in 1850.

The Land Claim Act had several goals. One was to resolve the 640-acre claims of land that were made under an 1843 act by the Oregon Provisional Government. The provisional government in Oregon was set up before the Oregon Country dispute between Great Britain and the United States was resolved and applied to American citizens in the Oregon Country - essentially the Willamette valley. To some extent the earliest American settlers were squatters on land claimed by Great Britain and the United States and never mind the Indians.

The Act was more than retroactive in recognizing the provisional government act claims, it also allowed claims up to 1854. This brought a rush of Americans west to the Oregon Country including what later became Washington State. The intent may have been to encourage Americans to Oregon to limit other land claims. It also set up an Indian war in southern Oregon. The Act also had a provision to work out treaties with the Indians of the Oregon Territory. But given the overlay of time of allowing claims without treaties in place was a recipe for trouble and in part rushed the treaty process in a manner that leads to all sorts of What ifs?

The Act very likely brought RH Lansdale to Penn Cove. Lansdale is credited with naming Oak Harbor on Whidbey Island. And the small settlement of Coveland near or on his claim became the first County Seat.

Lansdale did not stay long at Penn Cove. He took a job as an Indian agent in eastern Washington in 1854. He attended the the Walla Walla Treaty in 1855 and later became the Indian agent at the Yakama Indian Reservation after the Yakama War. He was removed from that post abruptly in 1861.
Posted by Dan McShane at 10:33 PM 2 comments:

Counting Pebbles in the Olympia-Age Sediment

A recent shallow landslide on a steep Whidey Island bluff had stripped off all the vegetation and top soil from the slope providing a good exposure of the underlying geology units. 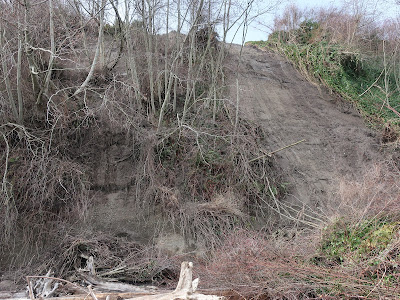 Near the base of the slope I observed a sand and gravel layer. Even though this unit has been compacted by the over riding glacial ice as well as an unknown thickness of sediment before the ice arrival, the unit lacks silt and clay and thus I was able to easily collect some sand and gravel. 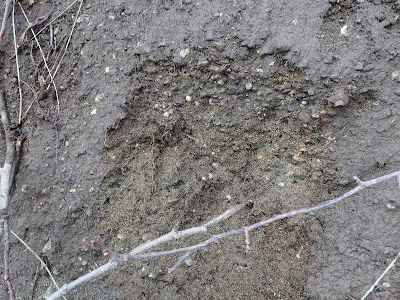 The most dominant pebbles in the gravel were irregular lumps of quartzite. 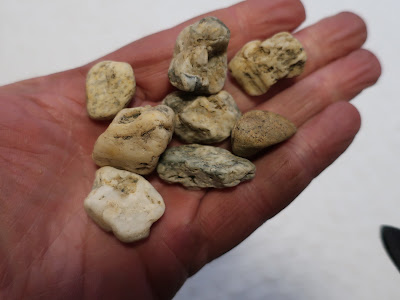 The pebbles in the Olympia-age sediments can be viewed as geologic history repeating itself. A river system eroded the Darrington Phyllite and carried these hard resistant pebbles westward. There would have been no Skagit Bay between what is now Whidbey Island and the Skagit River. The Skagit River likely extended well to the west before the last glacial period removed much of the large alluvial plain that would have extended out from the Cascades to the west.

Sea Otter Off the Quimper Peninsula

The northern shore of the Quimper Peninsula consists of steep bluffs rising sharply above the Strait of Juan de Fuca. Approaching the edge of the bluffs along this shore reach is always a bit of a thrill and there is always the reward of a great view. 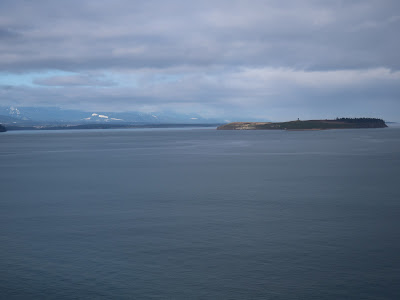 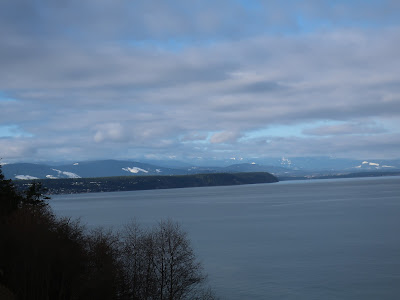 North shore of Miller Peninsula with Olympic Mountains in distance 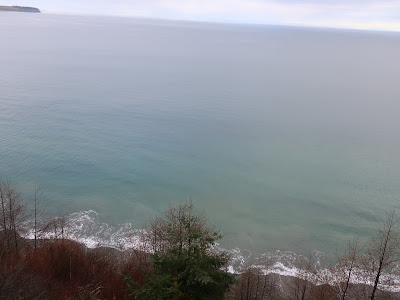 Steep drop to the beach below

If the above picture is blown up large you might be able to spot the two seals. Zooming in with the camera better captures our bird's eye view of the seals patrolling the coast. 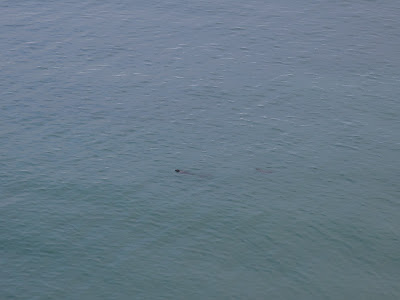 Later in the day while on the beach I noted an otter as well as a seal. 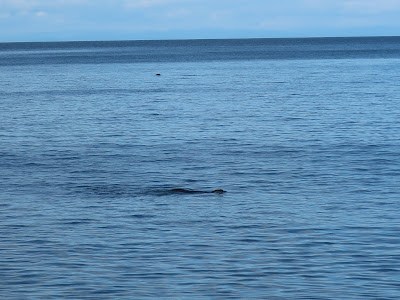 Otter is near and seal in the distance

This otter exhibited different behavior than the typical otters I am accustomed to. Typically river otters will lift their heads up high and stare at me either out of curiosity or making sure I am not trouble. This otter appeared to pay no attention to us. It also seemed a bit large for a river otter. The otter then did something river otters do not do. It floated on its back. 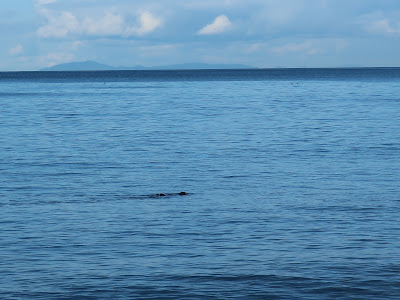 The otter was just far enough away that it was hard to get a definitive look, but I am fairly confident this was a sea otter. There is a fairly stable population on the outer coast after reintroduction and the slow recovery of the species after being hunted to near extinction for their thick fur.

Sato (2018) (wdfw.wa.gov/publications) notes that the occasional sightings of sea otters are reported in the Strait of Juan de Fuca and even rare sightings within Puget Sound. This is the first time I have seen one. This particular shore reach has a rich platform below the water with bull kelp. The underlying geology is a factor. The platform is underlain by boulder-rich Possession glacial till (more on that in a future post) that provides a rocky substrate.
Posted by Dan McShane at 8:04 AM 4 comments:

Mark had a request to use a picture I posted on the remains of the Mayview Tramway, a wheat tram above the Snake River (Getting the Wheat to the River). He

Mark alerted to a video of the Mayview Tramway in action. There is  write up on the tram at historylink.