My first thought was that this exposure was a mixed up mess of glacial drift - that is a deposit made directly by glacial ice. 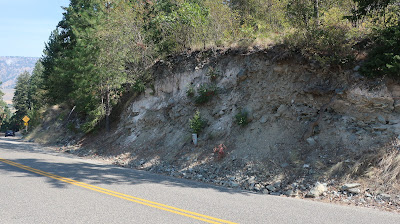 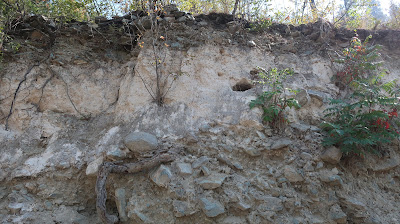 However, the light colored, non rocky unit was not compact and readily crumbled in my hand to a loose powder of fine silt. 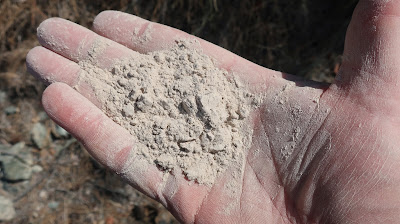 My take on this road cute was it was a talus deposit from the steep cliffs above overlain by a glacial lake deposit and then capped with yet another talus unit from rock fall from the cliffs above.
Posted by Dan McShane at 10:03 PM No comments:

Palmer Lake is located in a deep glacial carved valley on the east side of the North Cascades. 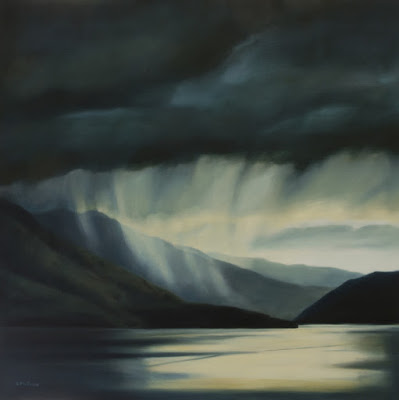 Chopaka and Palmer Between Lightning Strikes by Lisa McShane 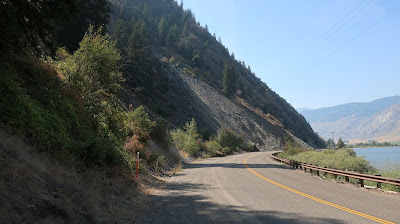 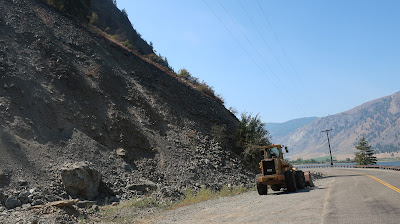 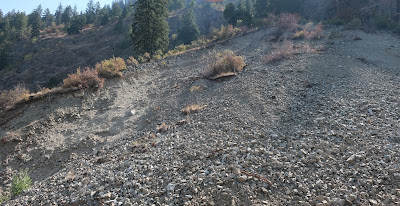 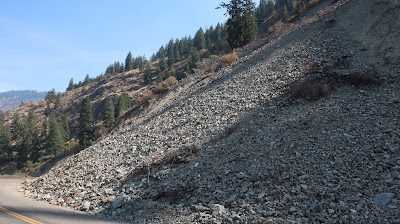 It appears that periodically a rock from high up the slope has enough momentum and perhaps a few bounces to get across the road. 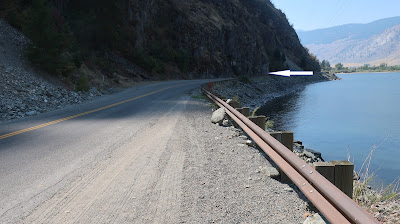 Rock blocked by guard rail from reaching the lake

The arrow on the above picture is pointing to the 1972 high water level of the lake. During spring floods, the Smilkameen River sends water into Palmer Lake from the north. I suspect that ice blockage on the river could do the same thing on a periodic basis. The May floods this year were not as high as 1972, but did cover the road in several places and left a signature of drifted debris along the edge of the road and did a modest amount of erosion along the road shoulder. 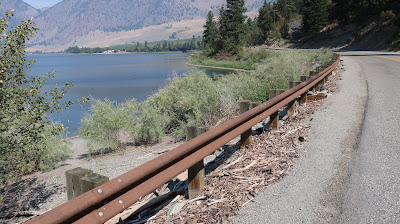 There was some truck traffic. One large orchard is located on the glacial sediments on the east side of the lake and apples were being harvested. 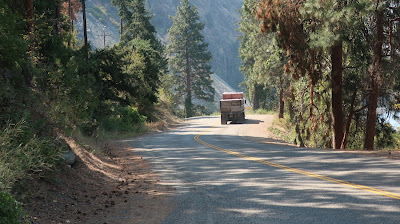 Posted by Dan McShane at 8:05 PM No comments:

I am in the process of moving which means going through stuff in the closet. In the back corner was a long cardboard tube. Inside were two large mylar sheets. One sheet was a mylar of all or parts of 12 7.5-minute topographic quadrangles. I had cut the original paper maps and spliced them together and then had copy business produce several large mylars from the original. Another mylar sheet was then overlaid on the base mylar map and was notated with geology contacts and measurements. Large paper maps at 1:24,000 scale could then be produced from the original mylars. 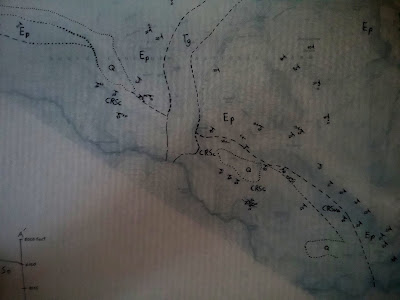 My biggest challenge was the size of the map area covered much more than the light table used to mark it up. I recall thinking afterwards it would have been better to have had multiple quad maps that would have been easier to manage.

Obviously a lot has changed in geology map production since the map tube got propped in the back of the closet - mostly for far better products that are much easier to access and read.
Posted by Dan McShane at 3:16 PM No comments:

The geology of the Similkameen valley shaped the early US government policies in Washington State. 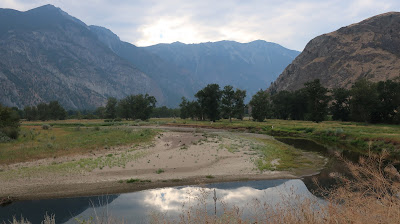 View of the Similkameen River and eastern North Cascades

The Similkameen River drains the east slopes of the North Cascades and flows out of British Columbia into Washington State within a very deep glacial carved valley. The rise in elevation from the floor of the valley to the summit ridge on the west side of the valley at Chopaka Mountain is 6,500 feet.

The valley and the mountains around it were briefly part of the short lived Columbia Indian Reservation. Chief Moses traveled to Washington DC in 1879 seeking recognition for his band of Columbia Indians; he and had not signed previous treaties in the 1850s and also refuse to go to the Yakama or Colville Reservations. His initial preference was to have a reservation that encompassed the northwest half of the Columbia Basin. But during his trip to Washington DC a reservation was agreed to that was approximately bound on the east by the Okanogan and Columbia Rivers, on the south by Lake Chelan, on the west by line of longitude that nearly reached the Skagit River and on the north by the Canadian border. President Hayes issued executive orders in 1879 and 1880 that stated that reservation was "withdrawn from sale and settlement and set apart for permanent use and occupation of Chief Moses and his people."

However, the new reservation already had mining claims. In particular, the Smilkameen valley was already an established mining district with several mining claims in the valley. Political pressures were applied by mining interests. 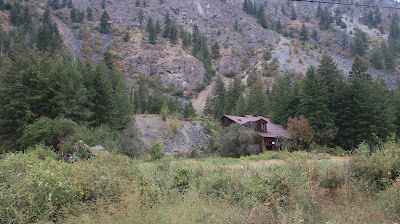 Mine tailings and old mill at the base of Chopka Mountain

Another executive order was issued in 1883 removing the northern 15 miles of the Columbia Reservation. More mining interests as well as ranching continued to create conflict. In addition, Moses and his band did not move onto the new reservation. Yet another executive order was issued in 1886 erasing the reservation completely. During the negotiation, Moses accepted a yearly stipend and then moved to the Coleville Reservation. 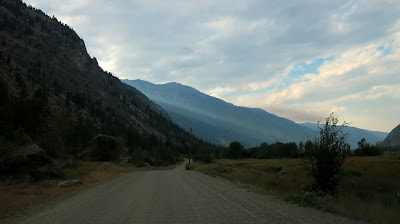 Some mining did take place in the Similkameen post reservation era. Placer mining still takes place within the river itself, but the mines never amounted to much. A rail line from Canada was built in the valley by the early 1900s. But the valley is now has very few residences. Much of the valley floor regularly floods. A few hay operations are still present. And Indians are shaping the future of this valley. The Colville Confederated Tribes have purchased several large tracts of land.
Posted by Dan McShane at 2:39 PM No comments: