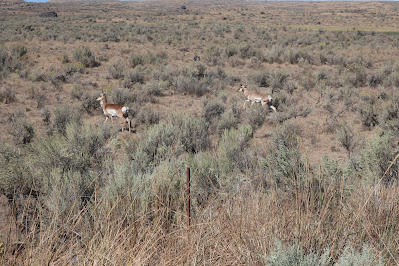 These two are from the Colville introduction. I had been told that that some of the pronghorns from Colville had crossed the Columbia River and these two were south of the river in northern Douglas County. This area of Douglas has a fair bit of scrub steppe land. The area was glaciated and has large areas of very thin soils over bedrock or thin glacial soils. As such cultivation has been very limited with grazing operations being the main historic land use and very few humans. All and all good wildlife habitat with pronghorns being new entrant after a period of absence.
The Yakama pronghorns have expanded their range as well and the herd numbers have held up post reintroduction (https://wdfw.wa.gov/publications/02288).
Posted by Dan McShane at 12:54 PM 1 comment: