Mary McCaslin - Prairie In The Sky

Mary McCaslin died earlier this month (nytimes./music/mary-mccaslin). Mary McCaslin wrote and sang a number of songs that always stuck with me - enough so that I could sing them through myself years after. Prairie in the Sky still resonates. I believe Mary and I shared a similar romantic view of the West. In elementary school I would always pick 'Home on the Range' whenever it was my turn to pick a song. Prairie in the Sky better captures that childhood longing to be out on the open range and essentially replaced that older song in my music list.
Posted by Dan McShane at 7:34 AM 3 comments:

A gold rush in the Cariboo District of British Columbia resulted in an influx of miners passing through Washington Territory in the late 1850s and 1860s. Some of the miners traveling along the Columbia and Okanogan River took to placer mining at the gravel bars along the rivers. Splawn (1917) described 50 miners working the gravel bar at the south side of the Columbia River at the confluence with the Okanogan River in the early 1860s. Much of the placer mining working river bars on the Columbia River was undertaken by Chinese miners.
Much of those placer mine workings have been submerged as the result of dams on the Columbia River. During a recent project I came across some old trenches on a terrace above the Columbia River well upstream of the Okanogan-Columbia confluence. The 1860s and 1870s placer mines were not documented operations and the archeological record is a bit thin.
I took a look at lidar bare earth imagery and found two obvious placer mine sites -- both partially submerged on gravel bars along the river between Grande Coulee Dan and Chief Joseph Dam. 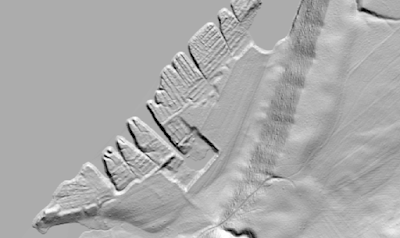 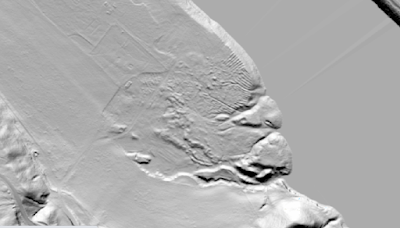 The Chinese operated placer miners primarily operated in the 1860s through the 1870s (Evenson, 2016). There are references to troubles with First Nations with one description of a massacre of the miners south of Chelan. Some of the placer sites were further worked in the early 1900s and I suspect that was the case at the two sites shown above.
Reference:
Evenson, Lindsey M., "Pre-1900s Chinese placer mining in northeastern Washington State: an archaeological investigation" (2016). EWU Masters Thesis Collection. 358.
Splawn, A.J., "Ka-Mi-Akin, the Last Hero of the Yakimas", (1917)
Posted by Dan McShane at 8:28 AM No comments: