Last week I was asked by an associate if I could send some geology pictures to a student. A rather broad request given the thousands of geology pictures I have in my picture files. What came to mind was perhaps a bit random, but deviated from my Washington State geology and geology hazards pictures.

During my time at Petrified Forest National Park I was fascinated by erosional pedestals formed by hard blocks of rock (in some cases the rocks were petrified wood) protecting much weaker underlying rock or sediment. 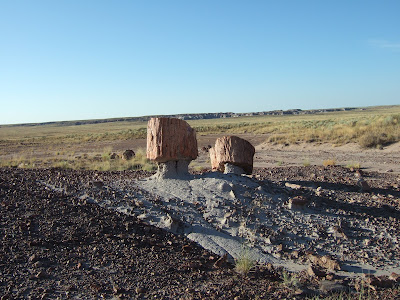 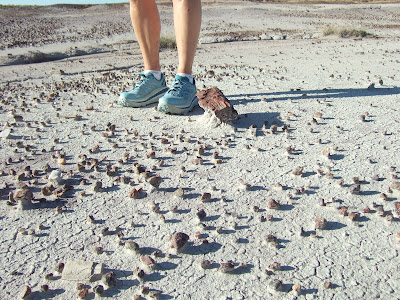 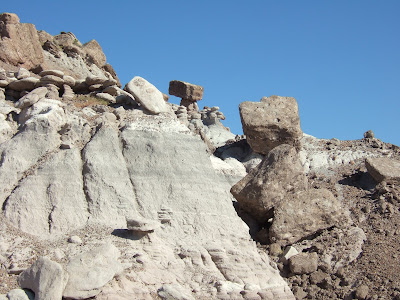 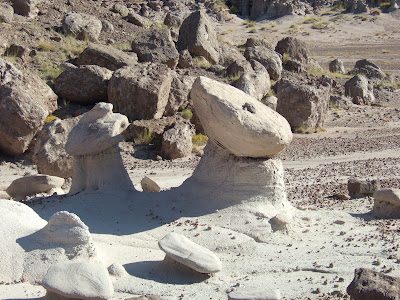 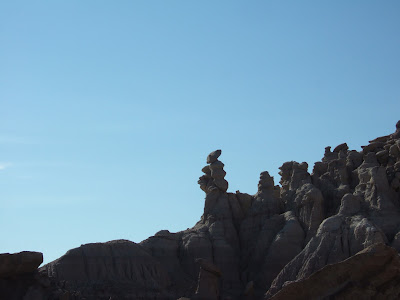 Posted by Dan McShane at 9:40 PM No comments:

The Skagit River Nibbles at Highway 20

The warm spell last week combined with rain and mountain snow melt brought numerous rivers up to near or just above flood stage in western Washington. The Skagit River took a bite out of a section of  Highway 20. Several pictures of the damage plus the high water associated with the damage were being circulated by agency and other up river folks. The email strings did not provide specific references to the photographers so I can't attribute as I would otherwise like. 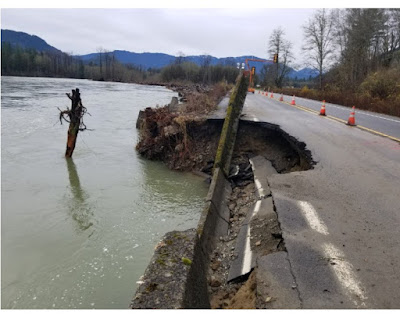 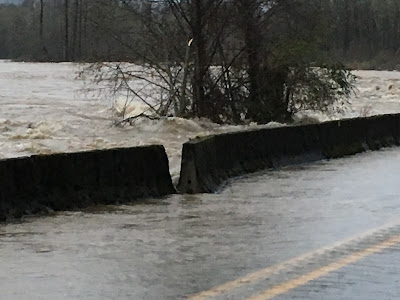 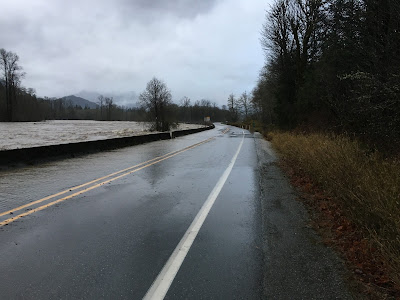 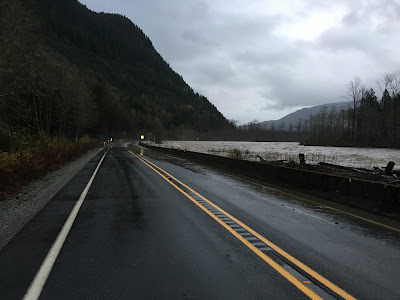 The location of the channel migration erosion is just upstream of the Cascadia Farm seasonal fruit stand for those familiar with the highway. The river has been hard up against the highway at this location and is within a river reach with wide channel migration bends and curves with a flood plain valley over a mile wide with multiple old channels upstream of the confluence with the Sauk River. 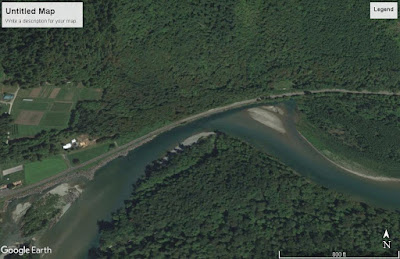 It is a bit of wet travel in Washington State. Rather bizarre to see 67 F at 7:00 pm last evening in Bellingham.
Posted by Dan McShane at 8:56 AM No comments:

The Big One: The Hypocenter Makes a Big Difference

Wirth and others (2017) presented various Cascadia earthquake scenario modeling results at the October GSA meeting in Seattle. I scribbled some notes during the presentation. Just where and how deep or shallow the rupture on the fault takes place makes a big difference on the level of shaking that will take place at various locations. By using the model combined with observations of deformation along the coast, this work is refining what various locations might expect from the Big One. Two scenarios presented were for a hypocenter off the central Oregon coast and another with the hypocenter off the northwest Washington coast. The shaking in Seattle would be stronger for the Oregon hypocenter due to how the seismic waves will propagate.

A press release associated with GSA talk provides video of the shake simulations:

Acer macrophyllum or big leaf maple sometimes forms the predominant stand in the forest. These stands can be long lasting in part because the maple trees do not die when cut. Maples will send up an inverted chandelier of stems from the trunk and rapidly form a dense seasonal canopy that appears to effectively block out other competing trees. I am aware of a few stands that are 100 years old. This particular stand shown below grew up out of a clear cut harvest of a mixed stand of mature Douglas fir, western red cedar, grand fir and western hemlock on a moderately steep slope. The maples have since been cut but have grown right back up again.

The geology of the site is an advance glacial outwash sand, a compact sand slope on a very old deep-seated landslide head scarp with an east facing slope aspect. 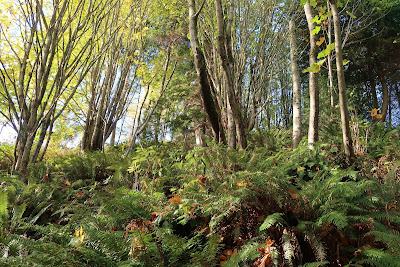 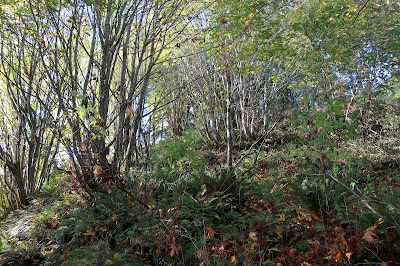 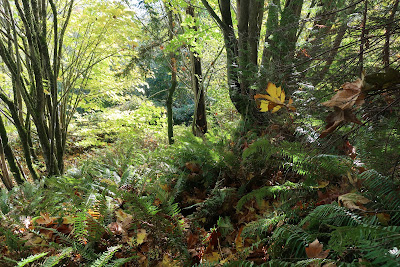 I had a few ventures onto forestry lands this past week. It can be easy to see the appeal of forestry related work even on chilly damp days. One venture into forest lands was for a couple of  projects that did include geology hazards but did involve a long day of hiking and finding bedrock outcrops. The other venture included a group field trip of geologists and land management types to a couple of deep-seated, very large, bedrock landslides and an opportunity to discuss large deep-seated bedrock landslides. Deep-seated bedrock landslides present a complex set of policy issues for geologists, foresters, planners, land managers and public agencies. Thanks to Casey at the DNR for the organizing and logistics. 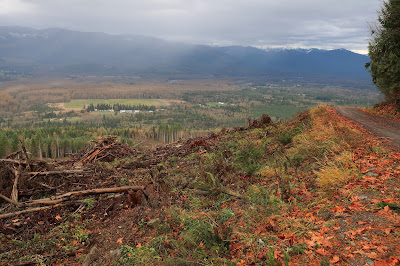 View across the Skagit Valley 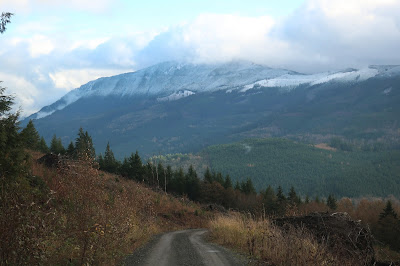 View of Slide Mountain from Sumas Mountain in Whatcom County 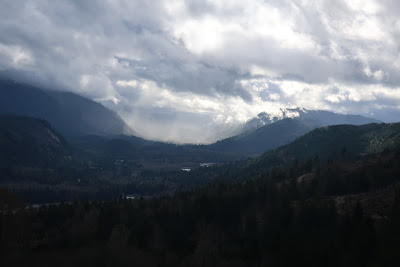 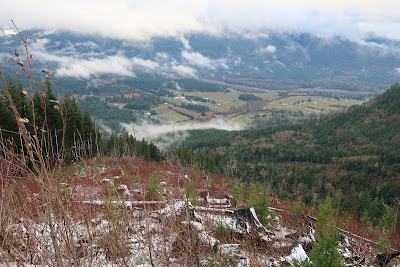 Looking down on the lower end of the Kendall Landslide 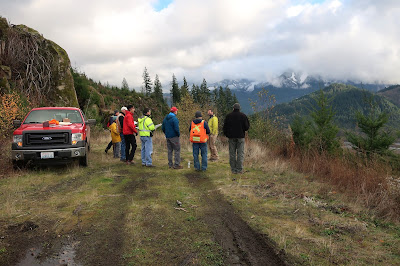 In preparation for a field trip to see and view a few deep-seated bedrock landslides, I pulled up a lidar image of one of the roads we are heading up in order to view another slide. The route takes is into an area that appears to have some slide features as well as a rather fractured looking slope. 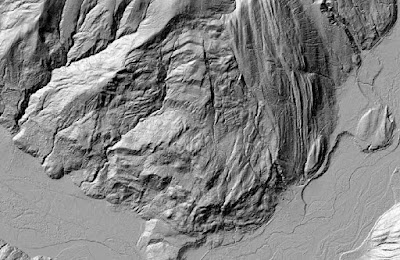 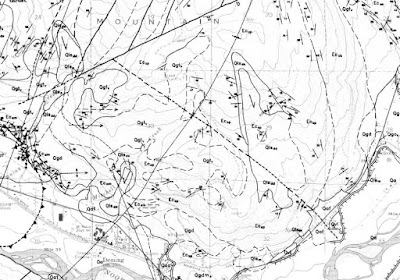 Geology map of the area by Dragovich and others (1997)
Geologic Map and Interpreted Geologic History of the Kendall and Deming 7.5-minute Quadrangles, Western Whatcom County, Washington

Dragovich and others (1997) mapped an area between two distinct surface fractures as a landslide. However, the lidar imagery suggests the slide complex extends further west. A later map by Lapen (2000) included the larger slide area. 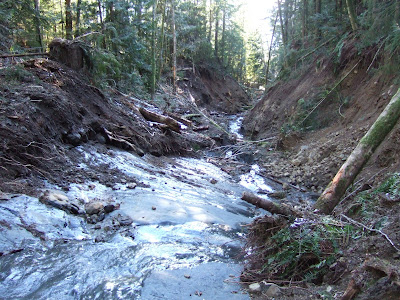 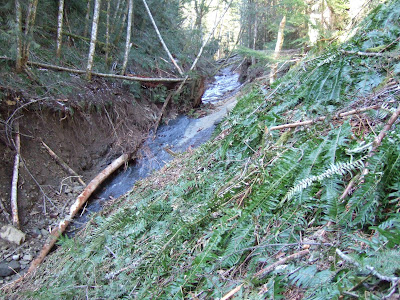 Complex topography and one one numerous mountainside deep bedrock failures to consider during our ventures and discussions.
Posted by Dan McShane at 6:24 PM No comments:

The issue I cared about was the Whatcom County sales tax for building a new jail. That tax failed with the "no" vote prevailing with over 57% opposed. This was a very satisfying win (my perspective). The amazing part is that nearly every elected official in Whatcom County was supporting the jail tax. But three of the the seven County Council members, Barry Buchanan, Ken Mann and Todd Donovan, voted against putting this ballot measure forward.

The real test of leadership will now commence. Can the County Sheriff, Executive and Prosecutor recognize that voters want to go in another direction with the County justice system than the one they advocated for. They are still the leaders on this issue. Those opposed to the jail can only express their views via voting. It is time for county leaders to take actions that reflect the direction of the voters.

Barry Buchanan likely won re election to the County Council. Not bad given that $100,000 was poured into this race by the Washington State Real Estate Association for his opponent.

A few years ago I saw Typhoon (http://wearetyphoon.com/)and have been a fan ever since. The Oregon based band has a set of shows after a long period of no tour dates. Looking forward to seeing them again and hearing their new Offerings.

Posted by Dan McShane at 8:57 AM No comments: 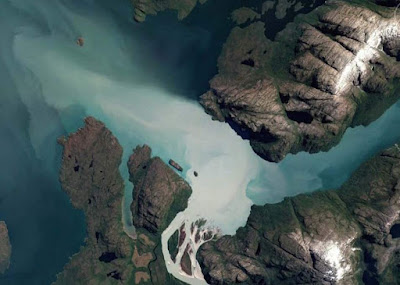 Plumes of silt and clay are poured into the marine waters from nearby melting glacial ice. 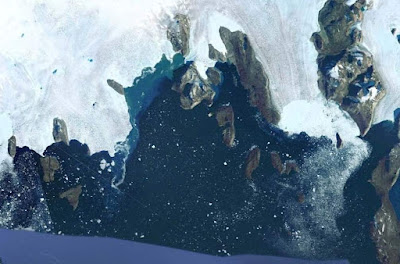 Another source of glacial marine sediment is from melting glacial ice floating on the sea surface. Ice bergs as well can provide sediment to the sea floor miles from the glacial front.


In northwest Washington, the glacial marine drift was deposited during the late stages of the last glacial period. The mass of thick glacial ice that was on the order of 5,000 feet thick in the area between 18,000 and 15,000 years ago had isostatically loaded the land surface such that the current land surface was hundreds of feet lower than the current elevation.

As the ice thinned the area became inundated with sea water. Floating glacial ice on the water surface melted and dropped sediment onto the sea floor. Sediment also was delivered by plumes of sediment rich meltwater that entered into the shallow water from ice covered nearby upland areas. Much of the glacial marine drift is predominantly clayey silt but also includes drop stones and coarser sediment dropped out by the floating glacial ice. 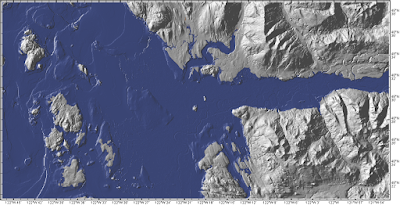 What the lower Skagit valley may have looked like when inundated with sea water. 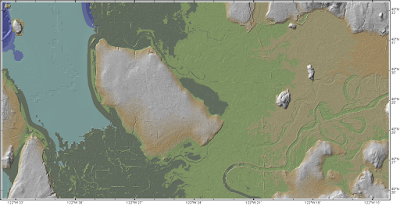 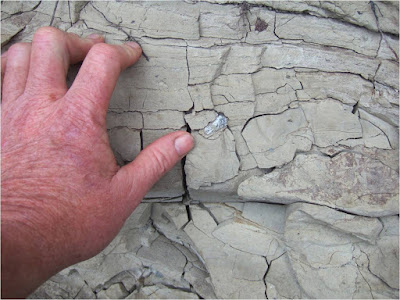 Areas where the unit has remained saturated such in long term year round wetlands or at depth below the year round groundwater level have not undergone wetting and drying compaction and remain very soft. 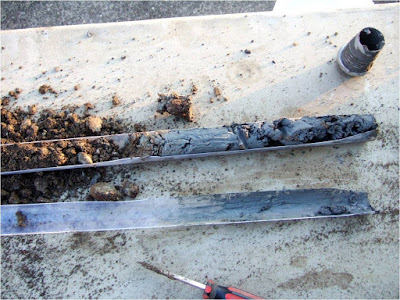 The geotechnical properties of the marine drift differ from glacial till, and generally allow determination of the difference without the need for fossils. However, it is always fun to find fossil evidence to back up the interpretation. 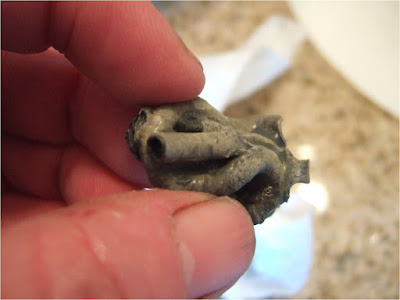