East Sound is an embayment on the east side of Orcas Island. The sound is very much like a fjord. At the head of the sound are two bays separated by Madrona Point. The western bay, Fishing Bay, has a rocky shore and the town of Eastsound (note the words are combined for the town name) is located above the bay. The eastern bay is Ship Bay with a sand and gravel beach and, to the southeast, a steep bluff non bedrock bluff. Wind generated waves coming up the sound from the south erode the bluff. A road formerly was located along the bluff; however, shoreline erosion and bluff failures led to moving the road by the 1960s. 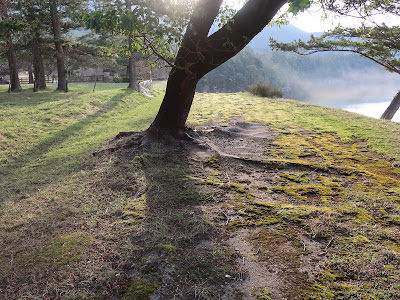 Pavement in not forever 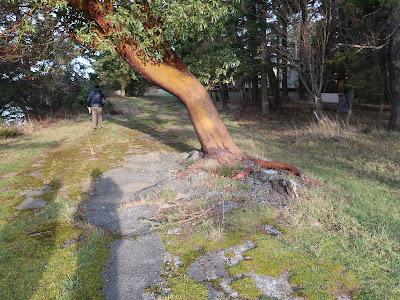 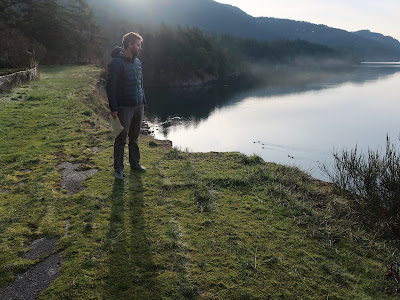 Missing road section and view down the fjord-like East Sound 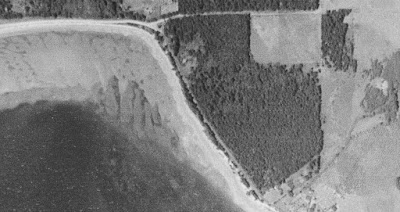 A Large Flock of Snow Geese

Driving across the Skagit Flats in winter I frequently encounter snow geese. I have posted about snow geese before: white-russians-in-northwest-washington. On my way to Whidbey Island late this morning I encountered the largest snow geese flock I have seen south of Bay View. They had been out on the tide flats during the snow, but grass fields are their preferred wintering ground. 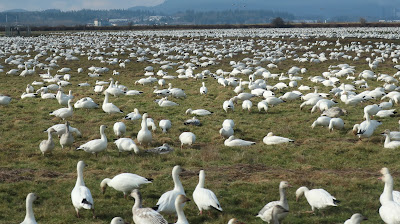 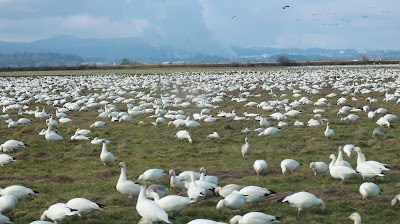 Hollis at plantsandrocks.blogspot has been seeking a tree to follow. I like the idea. I have had trees I would pay attention to through a year or two or sometimes longer.

During a different era I would stop to admire a struggling elm on the side of a ravine in eastern Washington. The tree was the highest up the slope growing along a good 100 feet above the trees growing in the ravine bottom where water was more plentiful.

There was another elm growing adjacent to a very old hand dug well in a lonely valley in the Horse Heaven Hills south of Kennewick. It was the only tree for miles. For several years it contained a great horned owl nest. I would purposely plan long runs to visit the tree - it was a 12 mile round trip.

A lone maple growing on the south edge of High Street Park in Bellingham is still a favorite. It's fall show was always spectacular. It is not a native maple and had survived its previous use as a landscape tree for the elementary school that had once occupied the site.

So when Hollis had a post about finding a tree to follow for a year I thought I should find one that I can easily visit once a month. Yesterday I found one nearby as I was returning from my ventures. 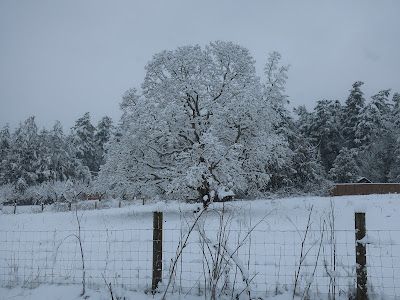 I do not believe this tree is a native, but clearly it is well established and appears to be more than tolerating the environment upon which it was planted.

Email ThisBlogThis!Share to TwitterShare to FacebookShare to Pinterest
Labels: flora, odds and ends

The variable nature of snow events in western Washington is fascinating. I enjoyed our first big snow at our new home on Samish Island. Roughly a foot fell over night. 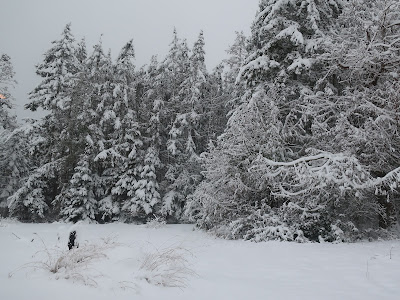 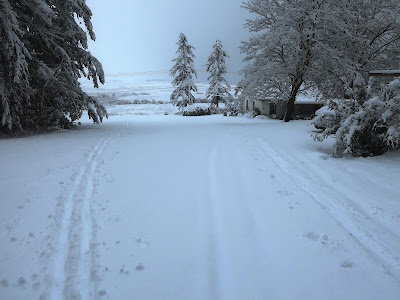 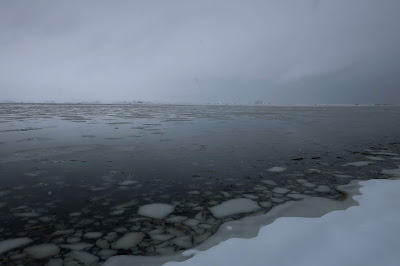 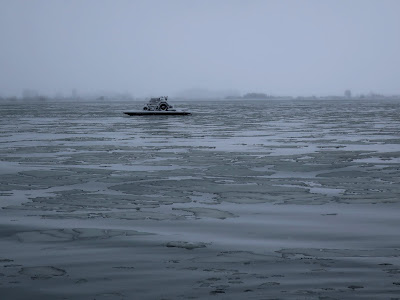 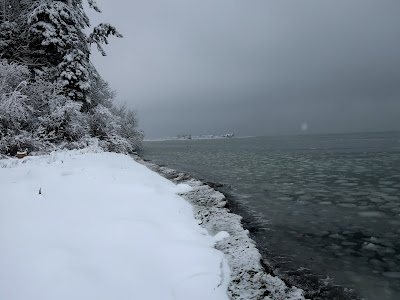 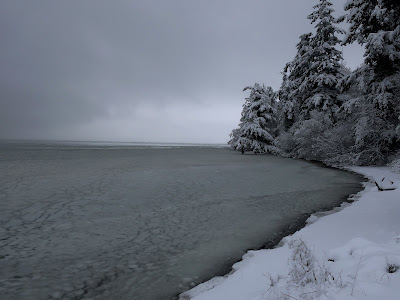 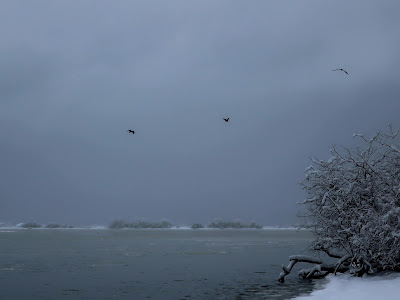 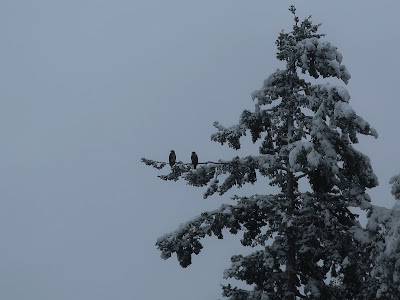 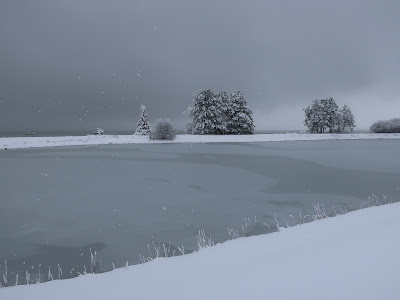 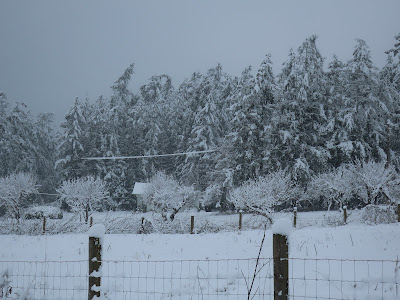 This snow event was a tree trimming event. Lots of loud snaps as limbs snapped off in the forest

Email ThisBlogThis!Share to TwitterShare to FacebookShare to Pinterest
Labels: weather 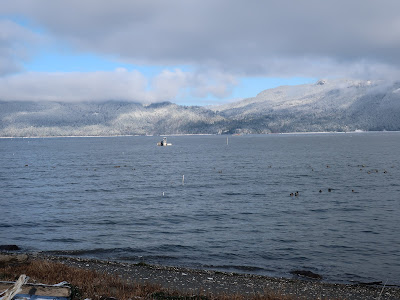 Samish Bay and the Chuckanuts

The winter weather event has covered the entire state with a mix of winter stories. I managed to have two field days between the storm systems. One day entailed a projects on Hood Canal, Olympia and Kent. I appreciated that Skagit County had plowed many of the county roads so I could reach I-5 with ease.

It is not very often that this shows up on the temperature gauge: 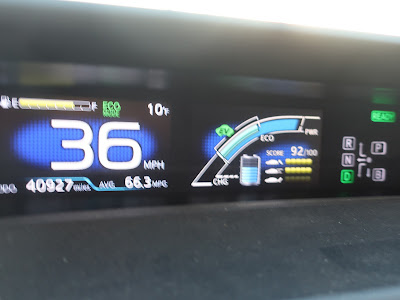 The second trip was a team effort with Ben and Geoff to the San Juan Islands. 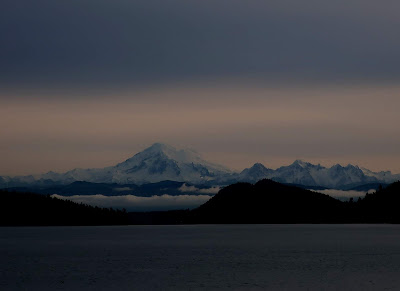 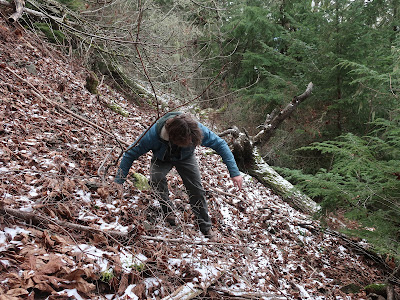 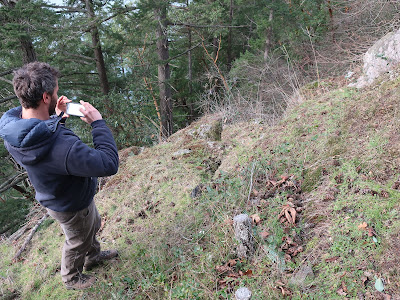 Orcas Island did not get much snow in the first storm, but did get wind. Whatcom County and the San Juan Islands get the brunt of cold outflow winds from the Fraser Valley. Within the San Juans, Orcas Island gets the hardest blast. The air from those outflow winds is cold.  A micro burst downdraft wave must have come down the lee side of Mount Constitution taking out dozens of large trees (Damage to Moran State).

We got a glimpse of the trees blown over and some cases simply snapped off while passing through Moran State Park. 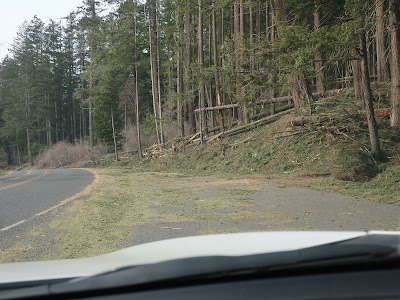 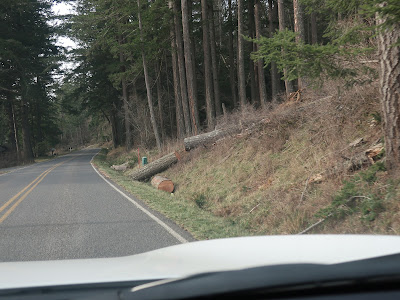 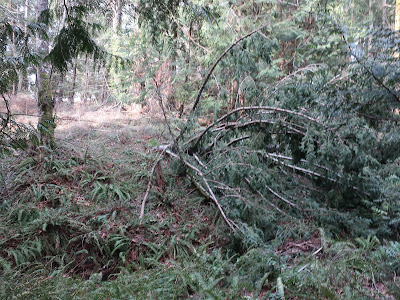 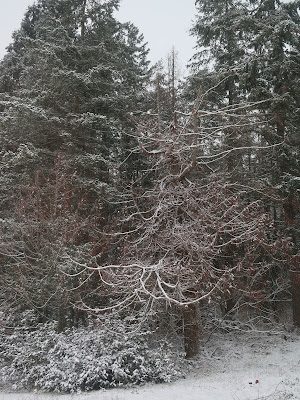 Kimberly Cauvel wrote a nice article on the die back of western red cedar in western Skagit County here: /warm-dry-summers-taking-toll-on-area-trees-plants.

Western Skagit County is partially within the rain shadow of the Olympic Range and hence a bit drier than some other parts of western Washington. Seabacher (2007) noted western red cedar die back on eastern Vancouver Island is similar dry sites.

Much of the die back I have observed in Western Skagit County has been on glacial marine drift soils near Bayview and and Samish Island (above picture). Many of these trees appear to have had previous stress as many of the trees have dead leads. But many now, such as the tree above, have completely died. The tree pictured above was one of six nearby cedars that have died within the past year or two. Within a quarter mile of this site are dozens more that have died.

Glacial marine drift soils in the area are silt and clay dominated. The silt and clay holds water and perched groundwater develops on these soils such that seasonal wetlands are common. However, the soils will become desiccated in the summer. A slight increase in overall temperature particularly in the spring and summer may be just enough to push the ability of some western red cedars to survive.