I was going through some pictures of the Snake River canyon through the southeastern Washington Palouse. The four dams on the lower Snake have been the subject of ongoing legal wrangling and policy debate. One big issue that may be under appreciated by some is the transport infrastructure and economy of the dry land wheat on the high plains above the canyon. I have previously touched on the subject of the Snake River and wheat transport (getting-wheat-to-river and mayview-tram-snake-river). There is no getting around the damage these dams as well as the dams in Hells Canyon have done to salmon populations. There is also no getting around how important the dams are for wheat transport. There is no good solution, or if there is, it will be costly. Indeed the existing circumstance has been costly.

The above said, I was looking at a picture of a grain loading facility on the south side of the Snake River just a bit upstream of the confluence with the Palouse River. 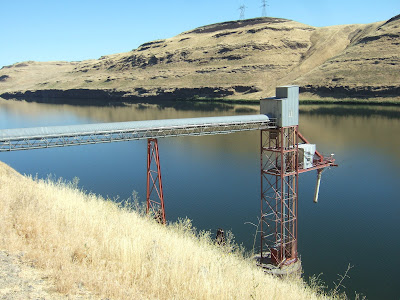 The tongue of gravel on the slope shown above was from one of the spill over routes of flood water into the Snake River Canyon. It is the easternmost of the spill routes from the ice age flood. The togue of gravel descending down the slope is a rather unique feature. Lidar imagery of the canyon captures this feature rather well. 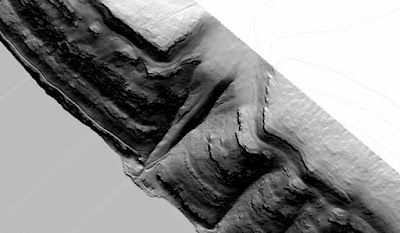 One more example of the need to reorient one's thinking when in ares impacted by the ice age floods.
Posted by Dan McShane at 12:48 PM No comments:

Guemes Mountain is on Geumes Island. Guemes is one of the San Juan Islands, but is in Skagit County. It is a very short ferry ride across Guemes Channel from Anacortes on a Skagit County ferry.

Nothing to do with the mountain but this layer of organic rich muck pulled up by blown over trees along Eden Road was a pretty cool site. 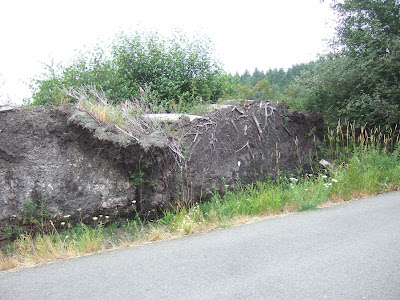 The trail up the mountain is a moderate climb on a well established trail through a mixed forest stand. 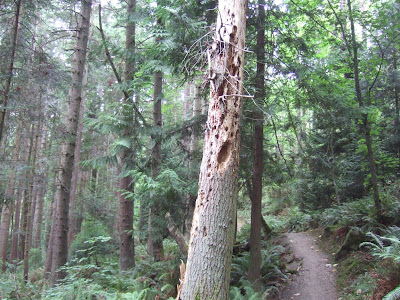 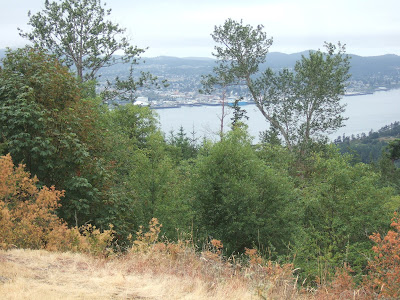 The view of Anacortes is a reminder that despite the ferry ride and hike, the big city is not far away 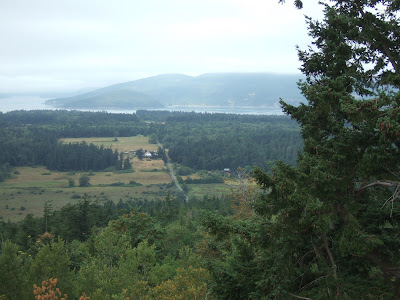 View west along Eden Road with Cypress Island in the distance.

Cypress is another San Juan Island that is in Skagit County. Most of Cypress is owned by the State of Washington and is managed as a Natural Resource Conservation Area. No ferry service to Cypress. 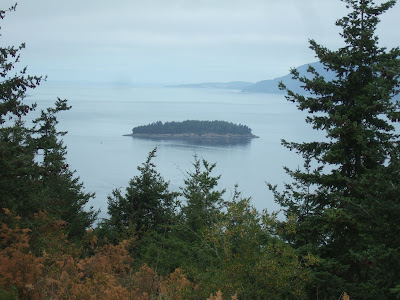 Jack Island with Lummi Island in the distant right

Jack Island is managed as a natural area by the San Juan Preservation Trust (https://sjpt.org/preserves-easements/jack-island/). It is a rather well hidden island as Guemes blocks the view from Anacortes and the small island blends into the background of other more distant islands when viewed from other angles. 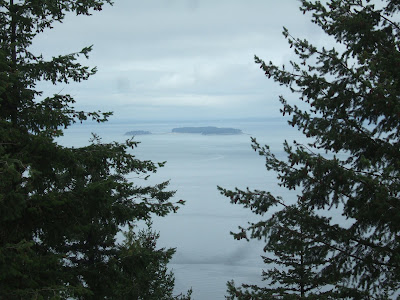 Eliza is in Whatcom County in the southern part of Bellingham Bay. 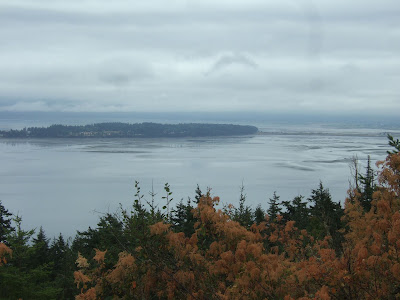 Samish Island is another Skagit County Island. The island is connected to the mainland due to the presence of dikes that hold tidal water out of a quarter mile neck of former tideland. Hence, no ferry is needed to get to Samish.

The summit of Guemes is underlain by intrusive rocks of the Fildago Ophiolite. The specific rocks of the ophiolite on Guemes Mountain are sheet-like igneous intrusions of granite, diorite, andesite and basalt - likely the roots of an island volcanic arc built up on the underlying ocean crust. 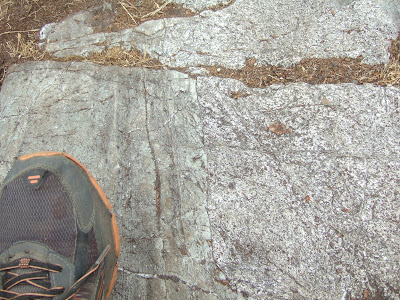 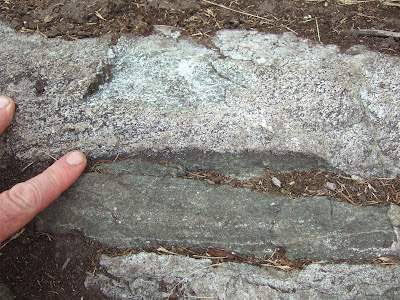 Notes From west side of Elwha Delta

I visited the west side of the Elwha River delta. The road dead ends at a trail head at a dike with a wide gravel path along the top of the dike. 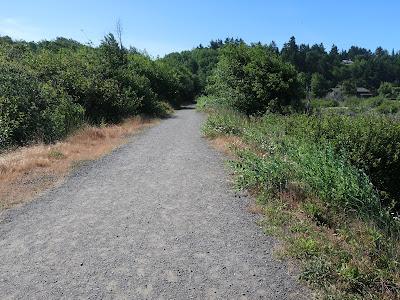 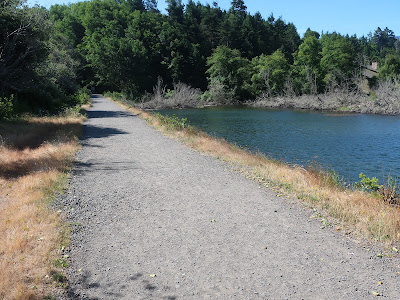 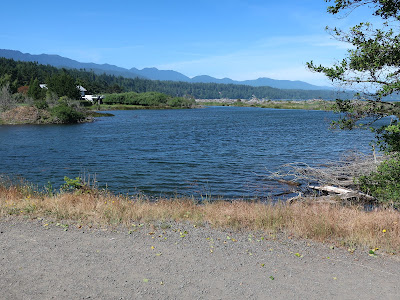 View west from the dike

The  dike was built to block the river from cutting hard to the west and eroding the homes and former Elwha village site as well as a cemetery along the shore to the west of the delta. An 1860s map indicates that the village was there at that time. The dike was in place by 1977. 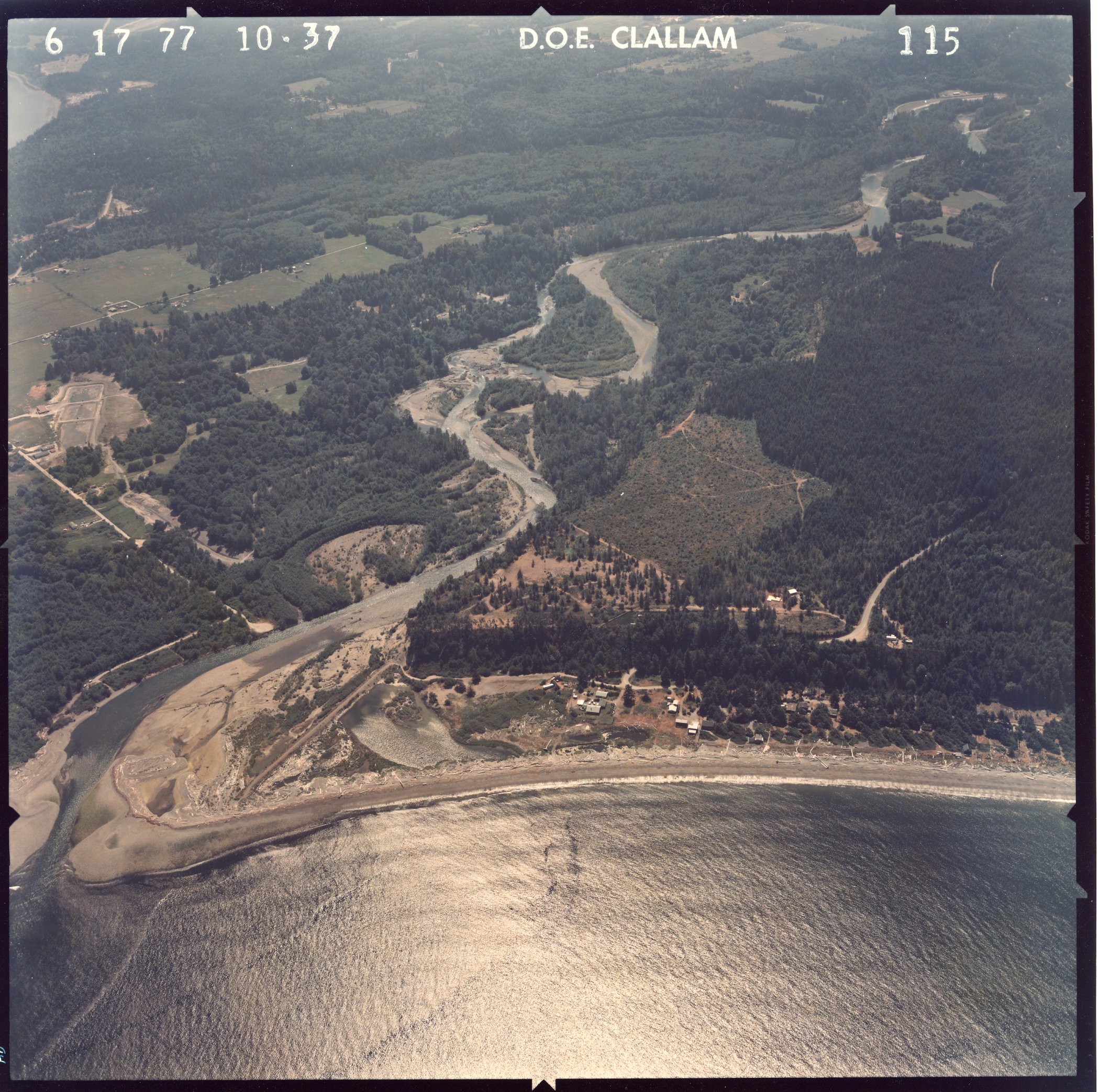 The river has since shifted away from the dike so its purpose is not so obvious when walking it today. 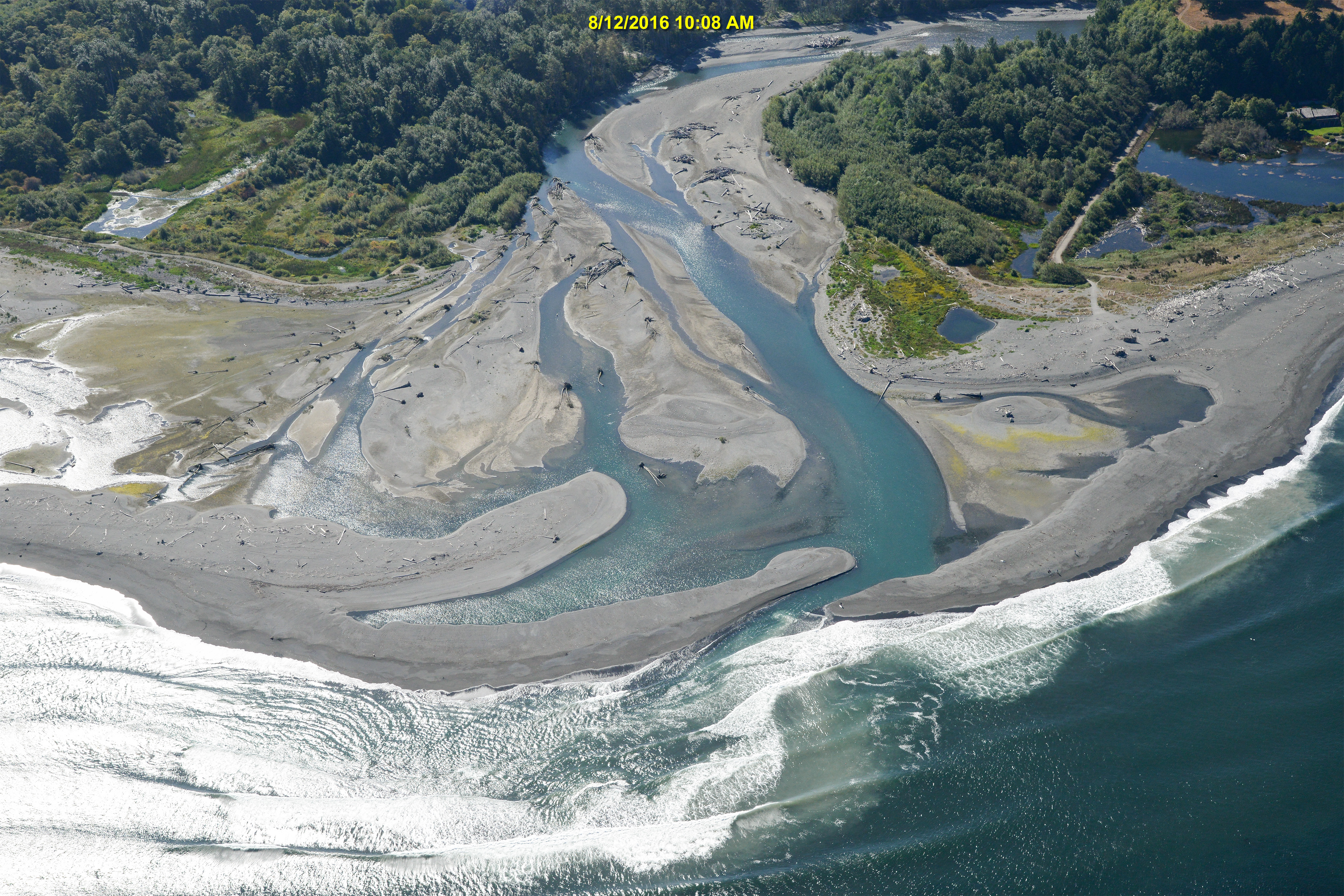 The past few years there has been a very large influx of sediment post dam removal on the Elwha (https://www.usgs.gov/news/moving-mountains-elwha-river-still-changing-five-years-after-world-s-largest-dam-removal).

One of the gig changes at least in the short term is the expansion of the beach to the west of the delta. The beach has become wider and substantially less steep and has a large accumulation of wood on the uppermost part of the beach. 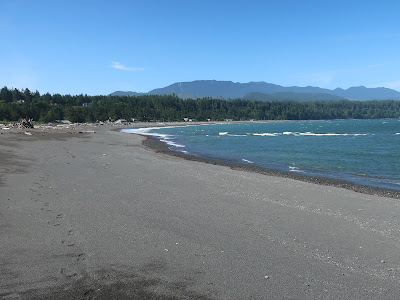 beach to the west 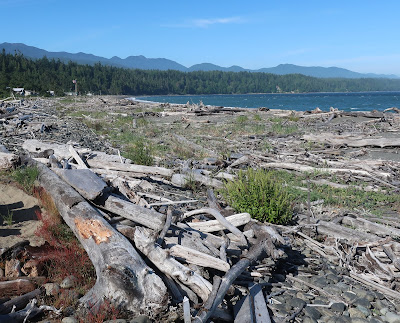 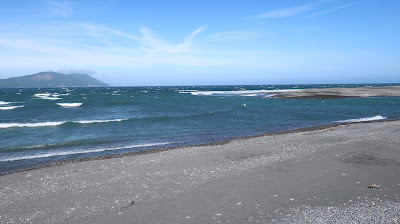 outlet of the Elwha 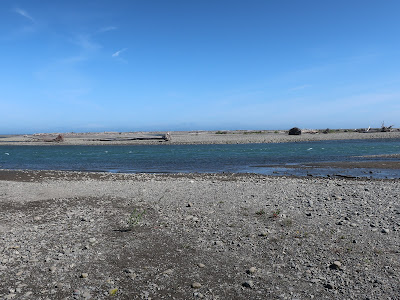 Broad gravel plain along river in the tidal area

I followed a trail through the riparian area of the forest to the river bank and then followed the river to the dike and returned to the trail via the dike trail. Hence, the pictures are in reverse order of my own visit. 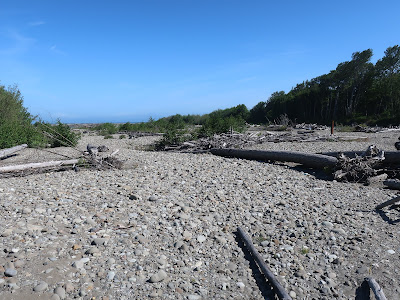 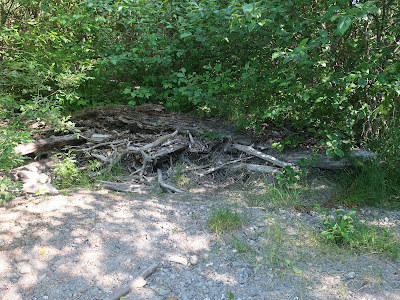 sediment and wood deposited within the riparian forest along river 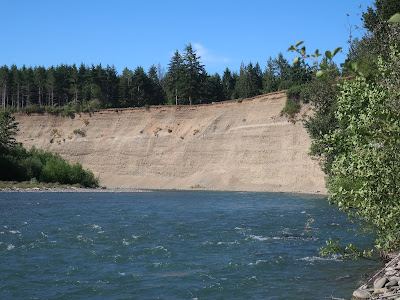 In the slightly wetter dry land farming zones of central and eastern Washington, canola fields have become part of the crop rotation. 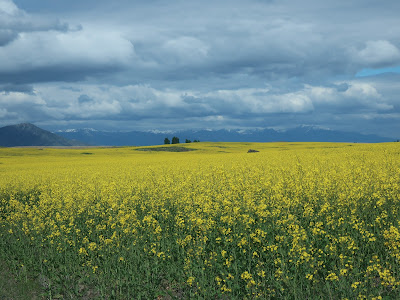 Central Washington canola field with North Cascades in the distance

Connolly, McCracken and Painter (2016) describe a cost spread sheet developed for farmers considering planting canola. There has been an uptick in canola in Washington in part due to a canola oil plant built in Warden in 2013. Viterra recently gained full ownership of that plant (Press Release to WSU). Improvements to infrastructure and technical support may lead to expansion of canola in Washington.

The term canola is derived from combining "Canada" with "ola". Canola is a product of breeding out the undesirable part of rapeseed and was developed on the plains of Canada. Viterra is a Canadian Company.

Changes in farming can be global, and a big market for canola oil is China. The US-China trade struggles may impact these brilliant yellow fields. China has its own canola agriculture and has had trade disputes regarding canola imports to China from Canada that recently popped up again likely associated with the Huawei case.
Posted by Dan McShane at 8:45 AM No comments:

Considering my field time and the areas of much of my field work I do not see bears very often despite often seeing signs of the presence. This one was not interested in being seen but I spotted the bear traversing open ground before plowing through the brush back into the forest. 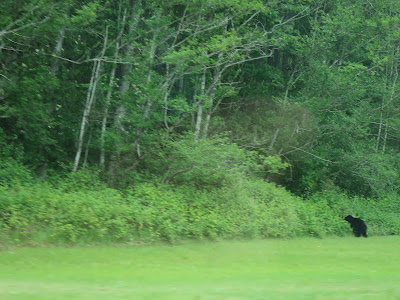 Black bear in Skagit County near Big Lake
Posted by Dan McShane at 10:05 AM No comments:

Geology is a critical component of agriculture. The recessional glacial outwash plains around Lynden in northwest Washington formed some of the best agricultural lands in western Washington. The narrow gap at Wallula in the Horse Heaven Hills backed up ice age flood waters which in turn filled the Yakima and Walla Walla valleys with thick blankets of silt (lake-lewis-and-wallula).

I had a nice geology outing with a soil scientist last week. It was informative interaction and we were traversing through country where Jay had completed soil mapping projects. Jay noted subtle features in the soil I would never have noticed without him. 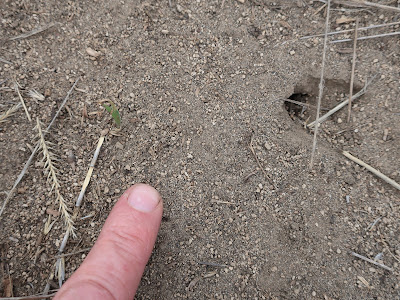 The small grains in the soil are tiny pieces of volcanic tephra. Given the central Washington location and the distribution of the grains Jay described, the source of the tephra is likely from Glacier Peak (Porter, 1978 and Kuehn and others, 2009). 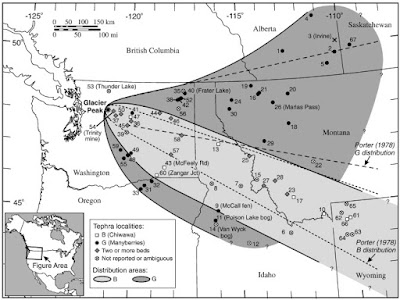 This seeming small feature is a big deal to the local agricultural productivity. The tephra fragments allow the soil to hold a lot more moisture and thus adds significantly to the productivity of the fields where the volcanic material is present. The various tephra deposits are an important dating tool and thus tephra deposits are of great interest to more than geologists. Glacier Peak had a particularly violent eruptive period during and after the last glacial period. Mount Saint Helens and Mount Mazama also deposit tephra over a large areas. The three volcanoes have left dating markers over wide swaths of teh northwest.
Posted by Dan McShane at 8:28 AM No comments: