Winter Notes From the Skagit Delta and Spring Tulips

Winter is well over now. A quick sum up of this winter's weather in western Washington: September was very wet - so wet that on the Skagit and Samish Flats the potato harvest was not completed due to saturated fields that prevented harvest equipment from being able to operate. The rest of the fall reversed course including into December. It was not the typical days of rain and gloom but instead was mostly dry and mild. January made up for the dry fall with relentless rain that led to a fair uptick in shallow landslides. A brief week of cold spell followed with, at least at Samish, a string of snow storms that kept me home bound for a few days when the snow got above the front bumper. The rest of the late winter and spring was dry.

A key to farming on the Skagit and Samish Flats is getting out on the fields. The early dry spell meant an early start to working the rich delta soils. It also meant upon my return from eastern Washington getting behind slow farm equipment on the road. 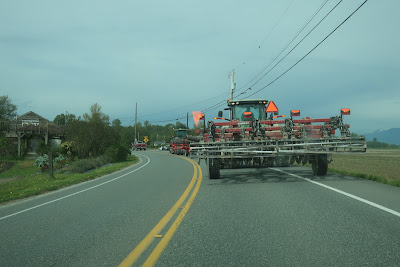 The sloe pace of 10 miles per hour gave me a chance to enjoy the scenery including views of tulip fields. 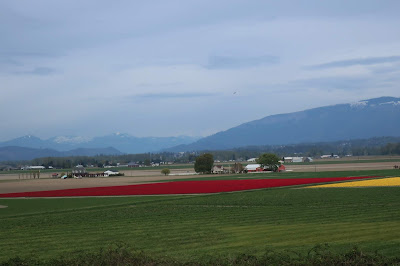 Although the day was bit overcast the ground was warmed up enough to cause a distant field of red tulips to appear to levitate. 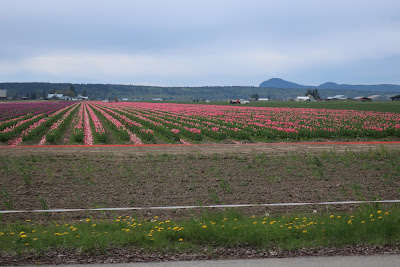 Tulips are a business. The above field had been harvested for cut flowers earlier in the day. Eventually the bulbs are harvested as well. Hope this will bring some brightness to our Covid times and the workers in these fields stay healthy.
Posted by Dan McShane at 10:55 PM No comments:

I had a bit of a hike on a closed logging road to access a steep slope. The road cut into the slope has a few small scale slumps exposing the underlying sandstone of the Clallam Formation. 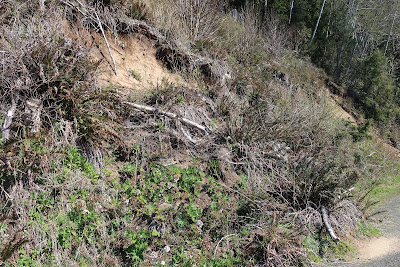 The Clallam Formation is on north coast of the Olympic Peninsula along the shore of the Strait of Juan de Fuca from Slip Point on the east end of Clallam Bay to Pillar Point. The sandstone dominated formation forms a slight outward bulge of the coast line with steep bedrock cliffs down to a bedrock platform shoreline. I did not have the opportunity to get out along the shore. The cliffs and tidal platform were an early attraction for geologists and in particular paleontologists because the abundant well preserved fossils in the formation. William Healey Dall (https://en.wikipedia.org/wiki/William_Healey_Dall) spent time on this coast and described many of the mollusk fossils.

While I was not able to visit the shore, I did get to examine the rock on the road cuts and slumps I passed, and I readily found fossils. 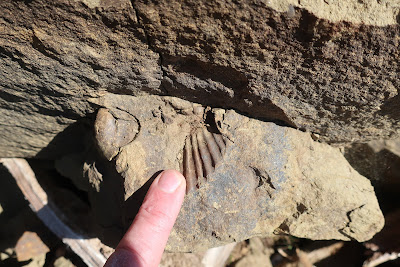 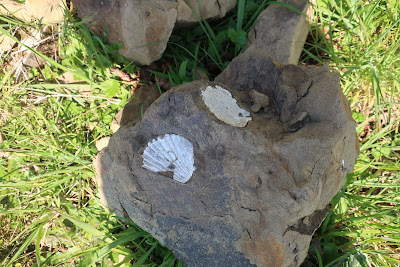 Finding the well preserved fossil, I turned to Addicott, 1976 to see if I could identify the find. Addicott notes that Vertipecten fucanus (Dall, 1900) is the most characteristic mollusk in assemblages from the Clallam Formation. Given that I observed this fossil in most of the outcrops I looked at, I can back that up.

For non paleontologists, you could simply call these big scallops. Once upon a time I taught a paleontology lab class. I was always just a day ahead of the students and since then much of what I learned leaked out of my head. However, I have always had an appreciation for the detailed work of paleontologists and Addicott's detailed report help me understand the formation I was exploring.
Posted by Dan McShane at 9:15 AM No comments:

Voting in the Time of COVID-19

The State of Wisconsin is trying to run an election at the same time as a pandemic that requires social distancing to stop the spread of the virus. The difficulty of running an election with social distancing is beyond possible. The election offices have had a huge number of absentee ballot requests as voters try to social distance and poll workers decline to expose themselves to virus pathways.

The State of Wisconsin's attempt to modify the election process by having greater flexibility with  absentee ballots be sent out, received and returned during a pandemic was over ruled by a 5-4 Supreme Court descion https://www.supremecourt.gov/opinions/19pdf/19a1016_o759.pdf.

The majority opinion reference COVID-19 one time near the end

"The Court’s decision on the narrow question before the Court should not be viewed as expressing an opinion on the broader question of whether to hold the election, or whether other reforms or modifications in election procedures in light of COVID–19 are appropriate".

While the majority argues this is case was a narrow question, I suspect all " other reforms or modifications" would also be ruled on in a narrow manner. Further, while the majority mentions COVID-19 once, the ruling was otherwise oblivious to the consequence of the pandemic and alterations that must be done to stop the spread of the virus.

During the time of COVID-19 Washington State can be grateful that we have vote by mail (You can also simply drop your ballot off at ballot drop off stations). It is a much safer approach.

In a different era (the early 2000s), I was on a county council that looked at our various voting options under new federal law passed after the 2000 presidential election. The new law eliminated punch card voting. Our County Auditor brought forward a preferred option - vote by mail.

The alternatives were far more expensive - costs of new voting machines, cost of software associated with new machines, cost of storing the machines and the costs of simply running polling stations all over a sprawling county with a city, small cities and low density farming and forest communities including parts of the county that required leaving the county to get to (Newhalem) or leaving the country (Point Roberts). The cost disparity was so great that the choice of vote-by-mail was by far the superior approach.

As I recall we were the second county to follow this route and now the entire state votes this way. Yes, we have to wait a bit to know election results. Election night, early returned ballots that have been processed (signatures verified) are counted. All ballots post marked election day or earlier are counted. In close elections it may be about a week before the final result is known, but it is now simply part of how elections go in Washington State. No more staying up late while exhausted election workers process ballots being delivered from the far reaches of the county.

Alas changing to vote-by-mail is politically fraught elsewhere in the Country with the debate having more to do with political power than voting efficiency and fairness. The very fact that the voting issue in Wisconsin ended up in the Supreme Court suggests as much as well.
Posted by Dan McShane at 8:09 AM No comments: