I previously noted the iron mining claims on Iron Mountain in Skagit County (hamilton-iron). The iron ore that was mined from a few of those claims was shipped via rail and then barge to Irondale, a small town south of Port Townsend (its-called-ironddale-a-for-reason).

I was recently a bit south of the site of the old iron works and unless one knew about the former industrial site it is hard to picture that this tree lined coast was once a heavy industrial site with piers and kilns. 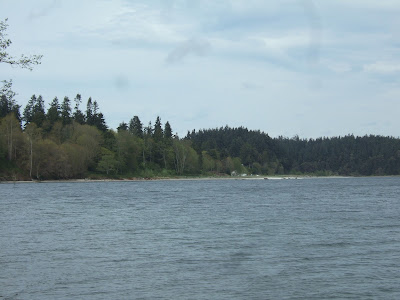 The kilns were located essentially on the beach. A cleanup of the site has been completed (see Ecology: Irondale Iron and Steel Plant). The former iron and steel mill is now a Jefferson County Park with a beach restoration project as well (gravelbeach.blogspot/irondale  and gravelbeach.blogspot/irondale). In addition to the iron and steel plant a large saw mill was located on the adjoining site to the north (right in the picture above).

The cleanup of the old industrial site and the cost to tax payers raises an interesting policy issue regarding industrial development that has presented a challenge to many communities. What happens to very specific industrial properties when the site is no longer used for that industry? Irondale is a bit of a lesson in this regards. The abandoned iron and steel along with some contamination remained vacant on this site for nearly 100 years. It is now a very nice beach park, but that was a long time for an abandoned mill to be left as a public nuisance. Something to consider for large scale project permitting.
Posted by Dan McShane at 8:08 AM 1 comment:

My job the other day was to assess the geology hazard at a very steep and high shoreline bluff. From the top of the bluff there was not much to conclude regarding the underlying geology. All I could ascertain was the upper bluff was too steep and too high to descend. 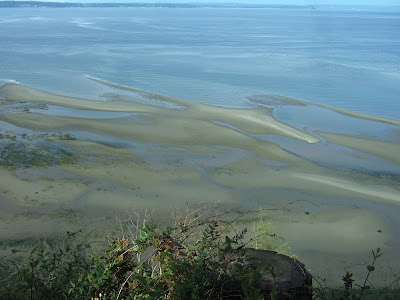 There was no way to see any of the bluff without taking a long beach walk from a better access point. The timing of the visit was very good with sunny weather and a very low tide which pulled out well beyond the local mean low tide.

There were plenty of good geology exposures along this steep bluff, but on my return walk I took some time taking in the marine life far out on the sandy tide flats. 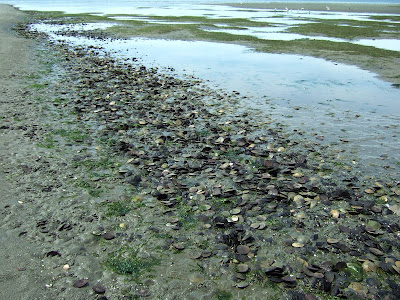 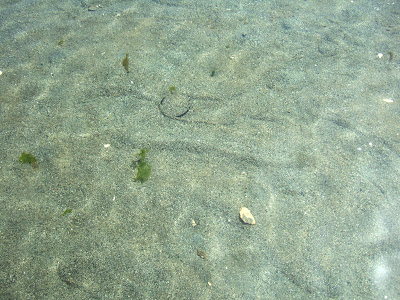 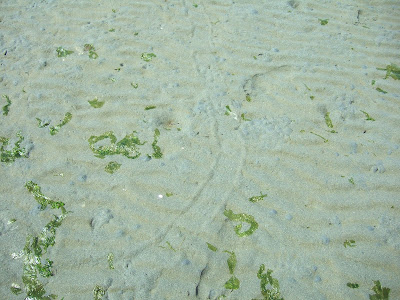 During my walk I came across several of these odd odd shaped objects on the tide flats: 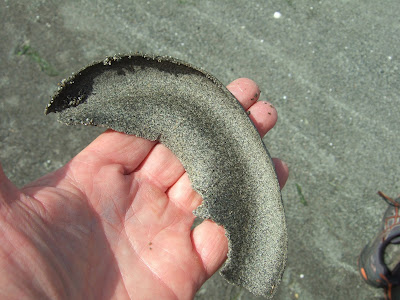 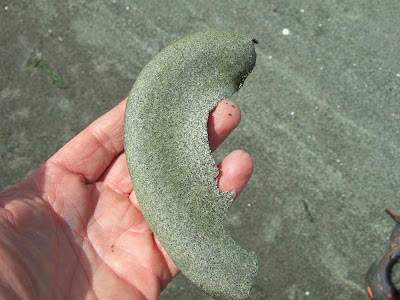 The objects are rubbery with sand embedded in them. 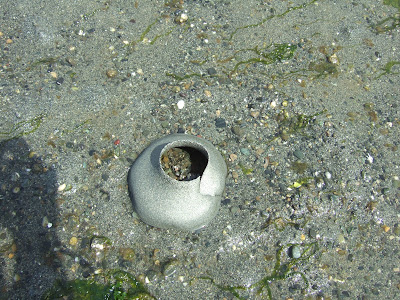 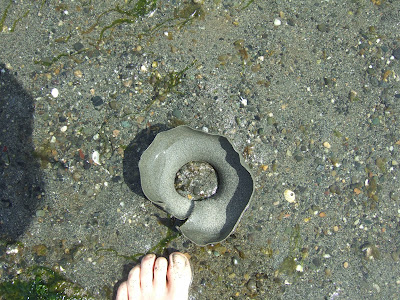 Then a bit further on I found the responsible animal. 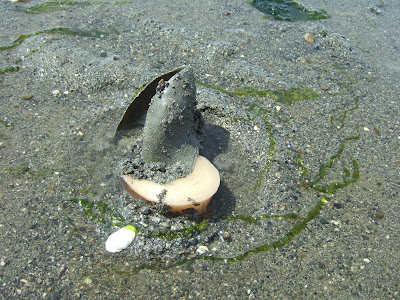 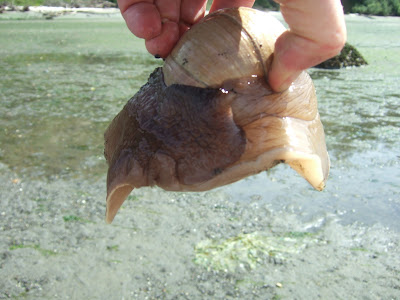 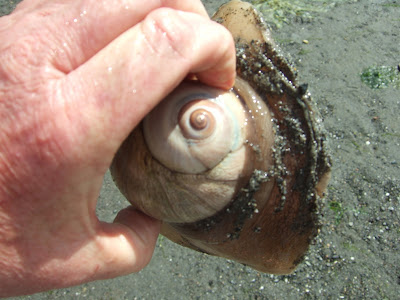 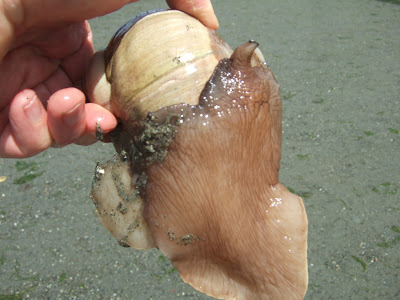 This large snail is Euspira lewisii or moon snail. The snail happened to also be April's Critter of the Month (eyes-under-puget-sound-critter-of-month.

The sandy rubbery casings I was seeing are egg packages and I happened to get lucky and saw an egg package being just released. The moon snail is a predator and eats clams by boring through the shell.
Posted by Dan McShane at 6:38 AM 1 comment:

A Very low Angle Landslide and a Low Angle Tree 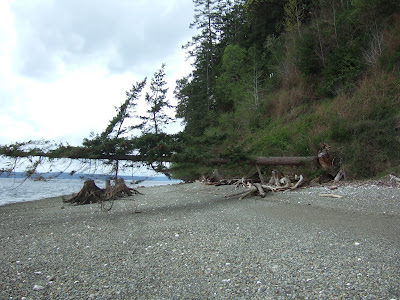 I had a revisit to a shoreline bluff that I did some work on 15 years ago. At the time, a relatively recent slide had taken place that left a pile of debris on the upper beach. The slide had also pushed over a tree that was growing near the base of the bluff. Seventeen years after the slide the tree is still hanging on and in fact, two of its limbs are now growing upward as leads. Rather impressive that a tree could maintain this angle. 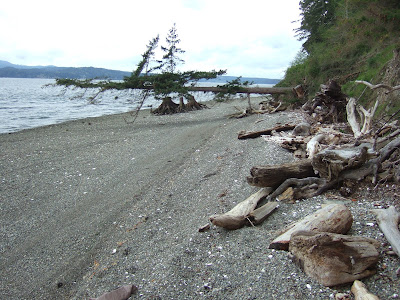 This shore reach is fairly stable. Despite being fairly exposed to open fetch, waves do not reach the toe of the bluff very often and the beach is well supplied with sediment from eroding bluffs to the west. When waves do reach the bluff toe, the erosion is slow due to the hard compact nature of these preglacial deposits.

The slide that pushed the tree over was a but unusual in that it was not from the steep bluff face collapsing, but was instead a flow of loose material that had "waterfalled" down the cliff from a very low angle slide on the upland above the bluff.

I found my notes on the slide "Failure slope is impacted by perched water being directed into a more sandy ice contact deposit that is not consolidated. Failure does not appear to be the result of clearing. Several old growth trees impacted. Failure slope is less than 10 degrees. Failure extends 250 feet back from the top edge of the bluff."

This slide taught me a few lessons and made me very alert for similar slides.

Posted by Dan McShane at 9:08 PM No comments:

The Van Zandt Slide Gets Some More Attention

Dave Petley calls attention to the use of LiDAR (light detecting and raging) and the Van Zandt landslide in Whatcom County (agu.org/landslideblog/2017/05/05/lidar/). His post is in part derived from a bellinghamherald article that covers the recent work of the Washington State Department of Natural Resources Division of Geology and Earth Resources (DNRGER). He also gave my blog a nice compliment - I did a short write up on the Van Zandt Landslide (van-zandt-landslide-introduction) a while back after a trip to the slide with Geoff Malick. Goeff is getting near completion of his thesis on the slide.

I typically do not use the portal very often as I have most of the maps I need and their accompanying pamphlets/booklets. However, a separate portal of really good LiDAR imagery has recently been developed by the DNRGER (http://lidarportal.dnr.wa.gov). This portal does not include as much LiDAR derived imagery as the main geology portal as a lot of LiDAR areas have yet to be added. But the quality of the imagery is sharper and allows one to pick which LiDAR flight to view when there are multiple LiDAR flights available. It also allows turning on or off the bare earth imagery. The site can also be used to download the raw data.

Below are the two images of the VanZandt Slde deposit from the portal - I should note some resolution gets lost in the process of saving the images to Blogger transferable images. 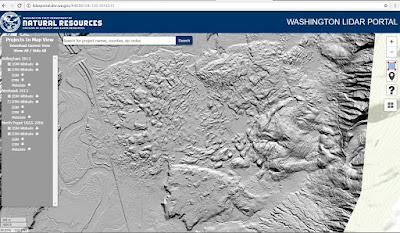 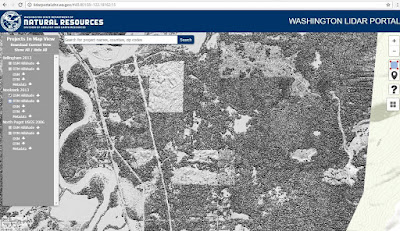 The DNRDGER has been getting really good at working with the LiDAR derived imagery by assigning color shades to elevations. 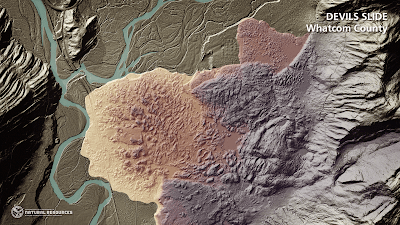 The imagery goes a long way to understanding where potential hazards are located. It has been my experience that the imagery is generally well understood by non geologists and the images certainly help me explain slide locations. The resources that the DNRGER are providing our state will go a long way towards better hazard planning - depending on how planners and politicians act.
Posted by Dan McShane at 4:46 PM No comments:

The Affordable Health Care Act was the other Washington's drama on May 4th. As the House bill debate was entirely within the GOP with no effort at bipartisan legislation, I will leave off the Democrats. There are 4 Washington GOP representatives.


Jaime Herrera Beutler released the following statement regarding the U.S. House’s vote on the The American Health Care Act:
“I remain steadfast in my commitment to repeal and replace Obamacare with health care solutions that better serve all residents of Southwest Washington.
“Despite working with House leadership, the President and Vice President up until the last minute to improve it, I still didn’t feel that the American Health Care Act does enough to make health care affordable and accessible for all.  And while I appreciate House leadership’s willingness to meet me halfway on my amendment to ensure vulnerable children aren’t left behind, the final bill still fell short.
“The difficulties this bill would create for millions of children still need to be addressed.  For the last several weeks, I fought to include my amendment to strengthen the Medicaid safety net for the kids who depend on it for their health care.  Protecting vulnerable children is a core purpose of the Medicaid program and when the program fails to do so, it fails entirely.   I could not vote to let those kids fall through the cracks.
“Southwest Washington residents also deserve a greater commitment to lowering health costs so that out-of-pocket expenses, premiums and taxes are taking up less of their monthly paychecks.  Congress should more purposefully move ahead with free market reforms that increase competition between insurance providers and drive down premiums and deductibles.
“I’ll remain fully engaged as Congress moves forward with this effort, and won’t cease working toward solutions that leave Southwest Washington residents with better access to health care than Obamacare has left them.”
Dave Newhouse was not able to vote as he was home with his very ill wife, but he did issue a statement. It would appear that he is favorably inclined to what was passed, but perhaps he is hoping the U.S. Senate will do something better:

“For years, I have been hearing from Central Washington families who lost insurance that they wanted to keep and are now paying more for health care due to the Affordable Care Act. Their stories of paying higher prices for insurance and higher deductibles with limited insurance options have been the reason I have voted in the past to repeal Obamacare along with its mandate and bureaucratic regulations. I strongly believe that every American deserves access to affordable health care, and the status quo under the ACA is not working. Because of my wife Carol’s health, I have largely remained by her side and was unable to be in D.C. for the vote on the AHCA. I am pleased the process to improve our health care system will continue with action by the Senate and further negotiations with the House. I will continue to work with my colleagues to keep my promise to reverse the burdens created by Obamacare and restore patient-centered health care.”

Cathy McMorris-Rogers voted, yes. I will offer the the opinion that McMorris-Rogers is a bit of a partisan hack. It is tempting to get into the weeds of each of her points, but the main driver of the GOP house bill is a removal of a tax of 3.5% on dividends for those that earn over $250,000. This is not a health care bill, it is a tax cut for a small segment of the population. What follows is her statement of why.

Dave Reichert voted no. Pretty clear statement as to why. I underlined "both sides of the aisle" because this bill was strictly a GOP bill.

U.S. Congressman Dave Reichert (WA-8) released the following statement regarding the upcoming vote on the American Health Care Act in the U.S. House of Representatives.
"Over the past several years, I have been committed to fixing our current health care system to increase choice, reduce costs on Americans, and allow families to access the care they need. I have also remained committed to protecting the most vulnerable in our communities, including children on Medicaid, people with preexisting conditions, and older Americans. These have been and continue to be my priorities for health care reform. Unfortunately, the current House bill falls short and does not provide the essential protections I need to support it.
With all of the political banter surrounding this bill, it can be difficult to remember that this decision ultimately comes down to people. We need to know our loved ones can get and afford the care they need, regardless of age, income, or health status.  And we need to know that changes made by our government, even to a failing system, will not leave our friends, families, and neighbors worse off. I will continue to work with my colleagues on both sides of the aisle to fix what is failing and make our current system work better for American families.
Posted by Dan McShane at 11:14 PM No comments: