A Hazard of the Job

Health and safety meetings and plans are part of a lot of work places. The idea is to reduce the unexpected - that is anticipate the things that can cause a safety issue. The picture below shows a safety issue that has caught me and recently gave an associate a problem. 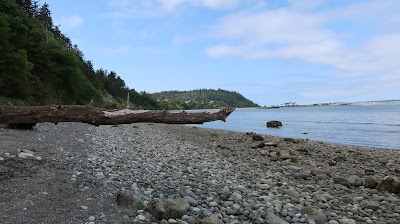 The cobble beach makes for tricky footing as the cobbles shift while walking and can also be slippery. Hence, one gets preoccupied with watching carefully where to place a step. Hence, it can be easy to loose site of a large sharp log sticking at out at 5 feet 8 inches above the ground.

It is sort of a funny thing to receive a hard joust from a stationary spear or log. Its even funny when it happens to you, but it sure can hurt while at the same time making one feel very silly.
Posted by Dan McShane at 2:30 PM 1 comment:

I see Lontra canadenis (river otter) on my coastal ventures. On rarer occasions I will see Neovison vision (American mink). We spotted this mink passing below us on the beach on the north shore of Orcas Island. I was struck by its comfort of being so much out in the open. 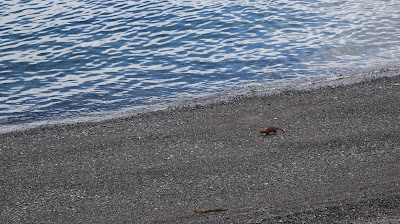 The same day and not very far away we heard screeching that I initially assumed was a hawk. Instead it was two minks rolling down the bluff slope and biting at each other. 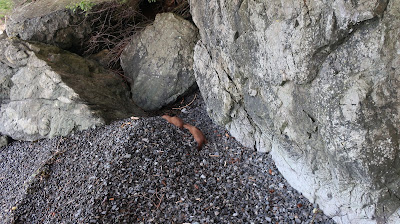 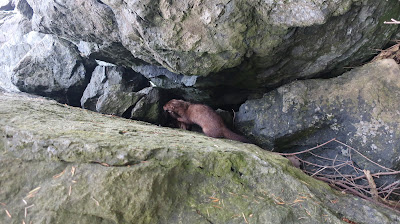 My take was that this was not a fight but was mating - but I am no expert on the ways of mink courtship or dueling and found the encounter confusing. I will say that the minks in question seemed rather oblivious to my presence with their full attention on each other.
Posted by Dan McShane at 3:05 PM 1 comment:

Amazing Video of Fox vs Eagle with a Rabbit Inbetween

My observations of foxes at American Camp (HERE) were not much compared to livingwilderness.blogspot.com/battle-in-sky-bald-eagle-and-fox posted coincidentally on the same day as my post. Besides the great imagery, the vent was captured on video. Pretty amazing event, but also good filming and photography work.

Posted by Dan McShane at 6:30 PM No comments: 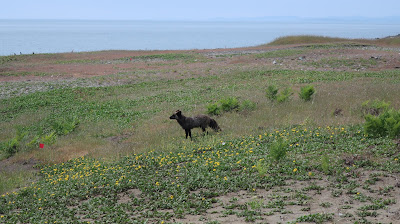 Before starting a short hike to observe the dune field and wave cut terraces at American Camp, I noted the warnings at the end of the road about not feeding the foxes and keeping a 75-foot buffer from them. The fox above seemed to understand that rule as the fox maintained about a 75-foot distance from me as it went about its business. 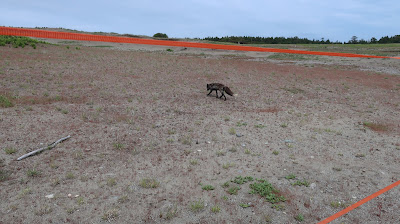 The foxes are clearly habituated to humans, and have thus become a park attraction. The fox in the San Juans is a part of the complex dynamics of shifting ecology as a result of the introduction of non native species (the fox is only one of many), land use change, and cultural change. The non native fox is a part of that mix. Many of the foxes on the island are not red.

Adventures Northwest (the-foxes-of-san-juan-island) has a good write up on the foxes at the park.

While heading out on Pickett Road, this fox ignored the car as I passed by. 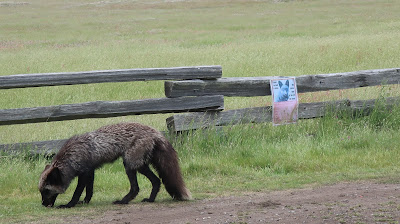 Fox at pull out on the prairie. Note the warning sign about foxes on the fence.

I had a bit of time to visit American Camp in San Juan Island National Historic Park. The park is on the southern end of the island where the American military set up camp during the joint occupation of the San Juan Islands from 1859 through 1874. The American Camp section of the park has extensive prairie land. This prairie supports a rare butterfly, Euchloe ausonides insulanus - Island Marble butterfly. 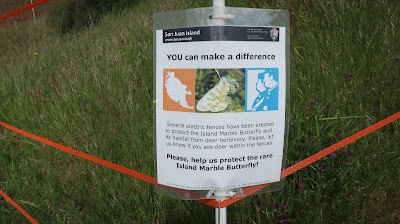 This butterfly has gotten some recent news coverage regarding the efforts to protect the species. The Island Marble butterfly was rediscovered in 1998 after being last observed in 1908. The rediscovery occurred at American Camp (wdfw). One threat to the butterfly is deer (see sign above). The deer like to eat off the tops of mustard plants and inadvertently consume the eggs of the butterfly or the places the butterfly would like to lay eggs. Hence, solar powered electric fences have been installed to protect the butterfly food source. 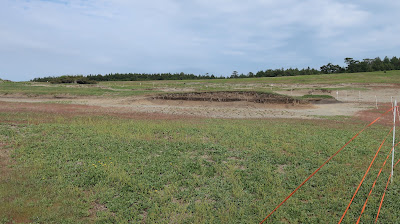 Being alerted to the possible presence of the Island Marble via the electric fencing, I spotted a few of the butterflies. And even managed to get a picture of one. It was a thrill to see such a rare species. 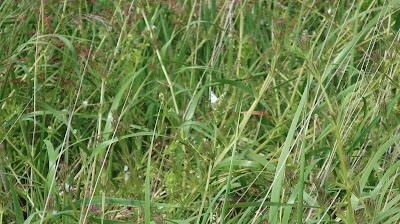 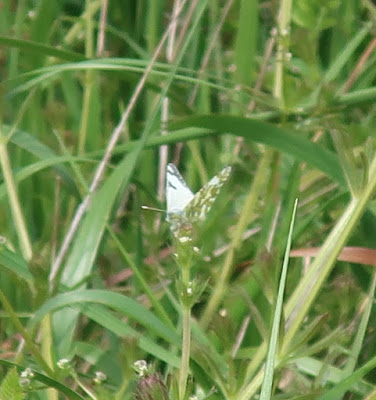 Efforts are being made to protect the butterfly and possibly expand its range (sjpt.org/island-marble-butterfly-project). Prairie areas in the San Juans have been greatly diminished and even where still present have altered from the original ecologic make up via invasive plants and grazing by domestic animals and now a high deer population.

The prairie at American Camp is on a south facing wind swept area underlain by glacial sediments that were reworked by wave action as the island emerged from below sea level during the late stages of the last glacial period. The prairie has numerous wave cut terraces and large kettles where blocks of buried ice melted out along the ice margin. The south exposure, rain shadow from the Olympic Range, and well drained soils as well as historic fire setting by First Nations peoples has resulted in one of the larger prairies in western Washington. 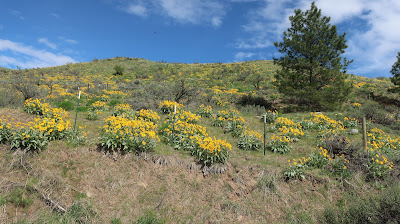 I was fortunate to have some central Washington ventures at a fairly optimum time for wild flowers. The Balsamorhiza sagittata was in peak condition on the east slopes of the Cascade Range - at least I think these are Balsamorhiza sagittata. There are multiple Balsamorhiza, but I am guessing sagittata based on my amateur plant skills and the fact that it is the most common of the balsamroots.

This particular hill side was lightly burned about 10 years ago and grazing has been limited to wild life only, so the crop of balsamroots was enough to cause me to pause and admire the slope before heading uphill.
Posted by Dan McShane at 6:49 PM 1 comment:

New Ecosystem Along the Columbia 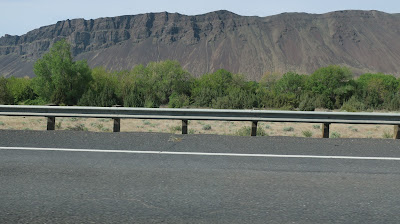 1,600-foot cliffs and talus slopes in the gap

The foreground feature of trees along the river is a relatively new development.

The dams on the Columbia River, particular the Canadian dams, prevent the Columbia from the past wild seasonal swings in river flow. The tamed river no longer has huge late spring and early summer floods as the Canadian dams hold water back. The loss of these large flood events has allowed trees to become established along portions of the river bank where previously the floods would have removed them. The river reach at Sentinel Gap has become progressively more wooded over the decades since the dam building era. The trees are a mix of willow, cottonwood and juniper as well as other brush,and this growth has formed a new ecosystem along the river.
Posted by Dan McShane at 7:51 PM 1 comment:

Kennewick is located along the Columbia River in southeastern Washington. Clover Island is an island owned by the Port of Kennewick. The island today is a small remnant of the original island which has been covered by water backed up by McNary Dam. However, even before the dam the island would have been subject to inundation from the large floods associated with the late spring snow melt from the mountains to the north. Dams in Canada have largely minimized flooding on the Columbia.

The island has been going through a slow but steady development including a fair number of sculptures including this min park that recognizes the early use of the island as a gathering place and a place ceded to the United States by the Cayuse, Umatilla, and Walla Walla Tribes. 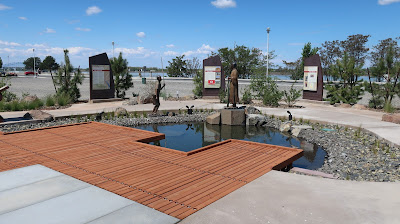 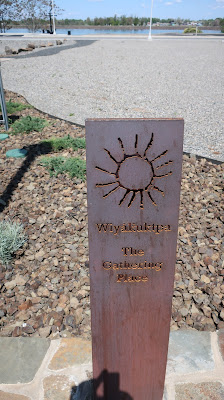 Posted by Dan McShane at 8:46 PM No comments: