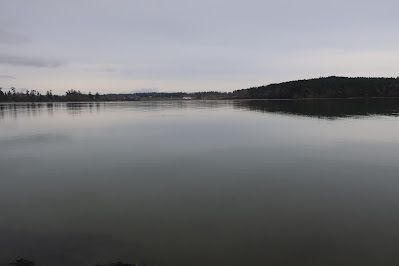 False Bay, San Juan Island, looking towards the head of the bay 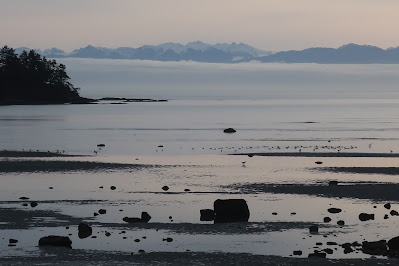 False Bay is an oval shaped bay on the south shore of San Juan Island. The bay is very shallow and much of it nearly empties during low tides; hence the name. The bay faces the Strait of Juan de Fuca. The day of my last visit was high overcast so the jagged skyline of the Olympic Mountains could be seen across the Strait rising above a band of low stratus.

Portions of the bay are bedrock shorelines, but most of the bay shore is lined silt/clay bluffs of glacial drift. The drift consists both of glacial till and glacial marine drift. The till was deposited directly by glacial ice when a few thousand feet of ice covered the area approximately 18,000 to 14,000 years ago. When the ice thinned the area was inundated by sea water with ice floating on the surface. The mass of thick ice had pushed the land surface downward hundreds of feet. The melting glacial ice floating on the sea dropped sediment onto the sea floor. After the land rebounded from the ice load, the former muddy sea floor emerged and is now exposed along the low bluffs along much of the shore of False Bay. 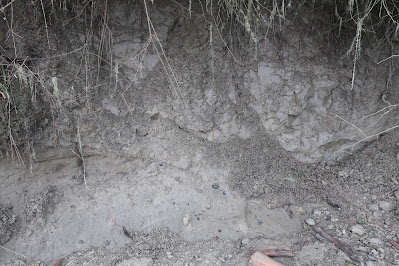 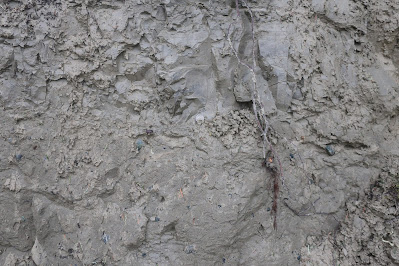 The glacial drift in this area is mostly clay and silt, but there are some cobbles and boulders embedded in the silt/clay. This silt/clay sediment source has created extensive mud flats with scattered boulders throughout much of the bay with a few areas where bedrock rises as islands or tidal submerged outcrops. Shifting tidal currents and waves have winnowed the gravel and sand from the mud forming sandbars and gravel bars that are exposed on the tide flats when the tide recedes. 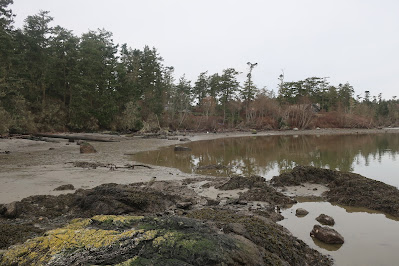 Muddy tidelands with bedrock outcrops
The bedrock is mapped as Orcas Chert along the south portion of the bay and Constitution on the north (Schasse, 2003). It is not a good bay for ships to venture into seeking safe harbor. While not so good for ships, the mix of muddy tidal flats with sand and gravel tidal areas, boulders, bedrock outcrops and freshwater streams flowing into the bay makes for a very complex estuary with a range of habitats. The bay tidal land is owned by the University of Washington and is managed as a biological preserve. The wide variety of tidal habitats is a great study area. 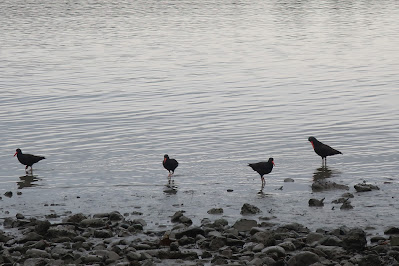 Oyster catchers eat what they study