Typhoon - Welcome to the Endgame

Kyle gives us a bit of what he has been working on during this strange year (https://wearetyphoon.com/): "This song belongs in the present moment and it felt important to get it out in the world now." I have found music and art to be of great help during this past year, but the interface has been altered by COVID. If you can, support the musicians and artists that help shape your perceptions.
A bit of lower Columbia River landscapes in the video with the song. The tunnel and tenor of the song does fit well with this next Tuesday. We will see what is on the other side.
Posted by Dan McShane at 9:43 AM No comments:

The Sounds of October

This is my second October living full time at our current home. October is a month of change. Yes, the colors change. Maybe golden leaves on the the big leaf maples. The initial fall rains flipped the brown grass to green.

But the big change that has gotten my attention are the sounds: 1) The early rains brings out frogs. The tree frogs begin some chorus activity before the colder air shuts things down again - no calls tonight as the temperature is down in the 30s and perhaps 20s by morning.  2) One of the abrupt sound changes is the early just as it gets light sound of guns. Our home is near tracts of State Fish and Wildlife lands as well as a hunting club property and farmland that allows hunting. October brings hunters to sit in blinds awaiting ducks and geese as well as a few pheasant hunters that venture to the brushy thickets between fields. I picture them sipping coffee or whiskey waiting for the ducks or geese to fly near. 3) Another abrupt change is the roar of wind through the forests west and south of us. This evening the wind is coming out of the north - calm around the house but very audible from the upper tree canopy. When the wind really cranks up from the south, a flute like sound emanates from the east side of the house. 4) My favorite is the great horned owls calling in the forest at night. 5) The massive flocks of snow geese honking overhead a week ago in the early morning made me think "welcome back from Siberia".

I had a venture on Orcas Island (One of many this year). These trees on the edge of a rocky shoreline slope got a bit of my attention distracting me from the geology. 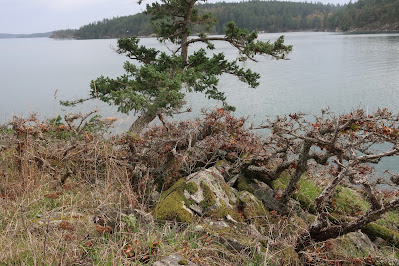 The evergreen is a Douglas fir. Likely a bit sculpted by wind and occasion salt spay and the rather harsh growing conditions on a bedrock slope with very thin to no soil. The woody brush was what got my attention. 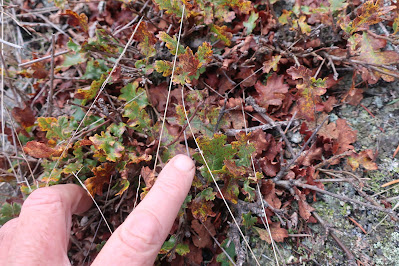 Oak leaves!
The brush was a group of low growing oaks. As far as I know Quercus garryana is the only native oak in Washington State and I observed numerous oaks in the near vicinity of this patch. The patch of woody brush appeared to be heavily browsed by deer and this can modify the growth habits of the browsed upon trees. Deer can be pretty good bonsai artists.
When I took the picture above I stuck my fingers into the image for scale. I did not see another plant tucked partly under the low oak. It was only after pulling my hand back that I noticed the plant. 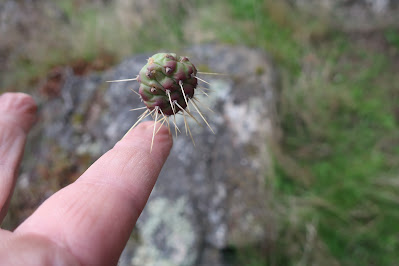 Opunntia fragillis - Brittle prickly pear cactus
This was a first for me on Orcas. I have seen this cactus on Lopez Island and Decatur Island. I had help spotting them on those previous sightings. The picture below shows that the cactus does not stand out. 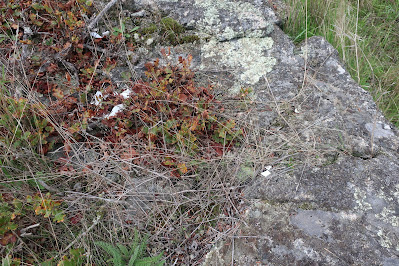 Once I spotted the first patch, or it spotted me, I started looking for other patches and found several. 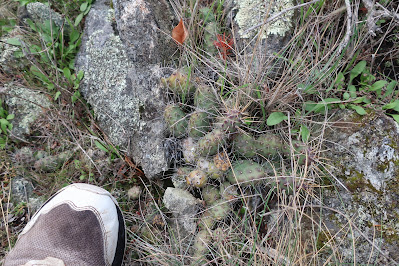 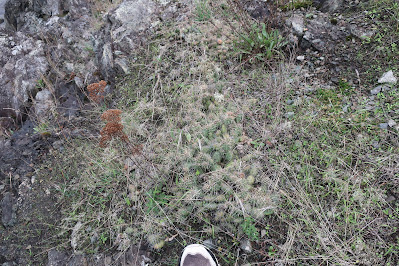 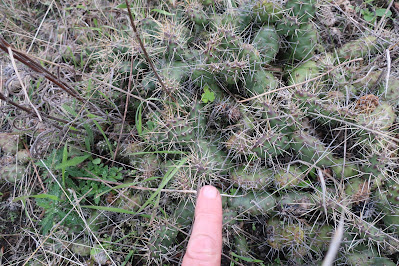 The cactus was was often just above the salt spray line. Just enough of a harsh spot to not get out competed by other plants. The Orcas site is on the drier side of the island as the island is situated within the rain shadow of the Olympic Range. 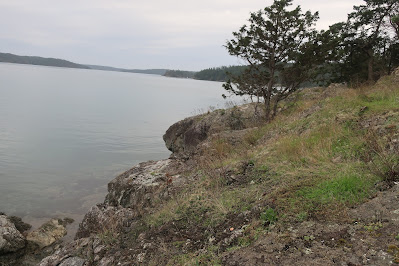 It is a pretty rare plant in western Washington and is limited to the Olympic rain shadow with reports of the cactus on Whidbey Island and northwest Jefferson County on the Olympic Peninsula. This species is also present in the Okanogan area of north central Washington along with a couple of other species of cactus. Its presence in the Okanogan indicates it is highly tolerant of cold weather.
Perhaps this species pioneered the barren ground after glacial ice retreated and has only hung on in places where other plants have had a harder time. There are theories that these plants on the west side may have been partially nurtured by First Nations peoples. Given the above setting, that seems very possible as it was an appealing site.
Domico, Terry. Brittle Prickly-Pear Cactus (Opuntia fragilis) in the San Juan Islands and Puget Sound Region of Washington State. Douglasia Occasional Papers, Vol. 7, No, 1, pp. 37-50, 1999.
https://opuntiads.com/records/opuntia-fragilis-haseltonia1.pdf
https://www.desertnorthwest.com/articles/native_cacti.html
Posted by Dan McShane at 7:02 PM 4 comments:

With cool early October nights, a flow of marine air from the ocean and perhaps some enhancement from California wildfire smoke, I had a very foggy venture along the shore of the Strait of Juan de Fuca west of North Beach Park in Port Townsend. 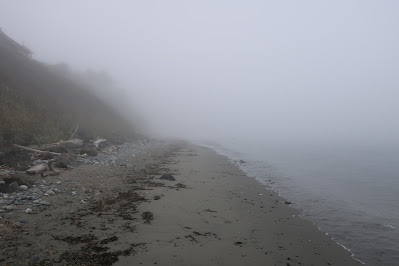 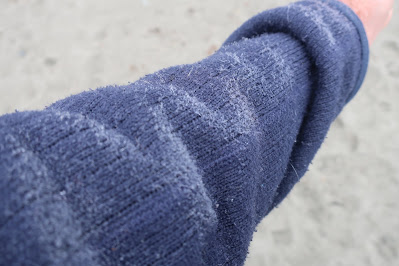 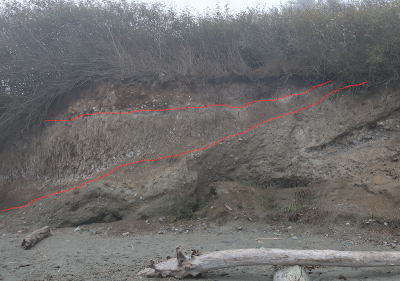 The till was deposited directly by glacial ice when glacial ice from the high coast mountains of Brish Columbia flowed across the area between 18,000 and 14,000 years ago.

The glacial marine drift was deposited when the ice thinned towards the end of tha last glacial period. The thick ice mass had depressed the local land surface hundreds of feet and when the ice thinned the area was inundated by sea water with glacial ice floating on the sea water. The melting floating ice rained sediment onto the sea floor forming a deposit called glacial marine drift. 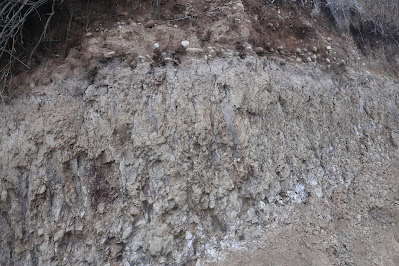 The land rebounded after the ice left, and the glacial marine drift emerged from the sea. The upper layer of the drift was reworked by waves and tides for a brief period and the finer silts and clays were washed away leaving the gravel and cobbles behind at the top of the marine drift as emergent lag deposits.

A bit further to the west another unit presents itself. 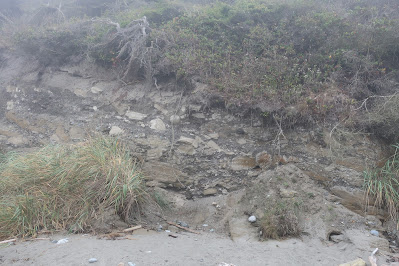 These deposits are great example of and a reminder of the force of under ice water flow. The Juan de Fuca ice lobe and the Puget ice lobe were melting as they advanced and retreated from the area. Much of that melt water would have been flowing under the ice as a confined and powerful hydraulic force that would tear up the underlying sediments. The shoreline reach between North Beach in Port Townsend and just past Middle Point to the west is one of the best exposures I have seen. Indeed it is hard to imagine a better one given the long line of well exposed geology on these eroding bluffs.

This shore reach is fairly well visited. Even on a foggy chilly morning I encountered others venturing along the shore. Many of the beach walkers are pretty locked into the beach looking for various treasures. As one heads west the beach sands and gravels present polished glass and is locally referred to as Glass Beach. The glass is derived from an old dump site as well as some less concentrated dumping including vehicles.

I had to do some navigating of backroads in Okanogan County. One road I took was called Split Rock Road. It was not until I reached the far end (or near end depending on where one starts) that I understood the name of the road. Made total sense. 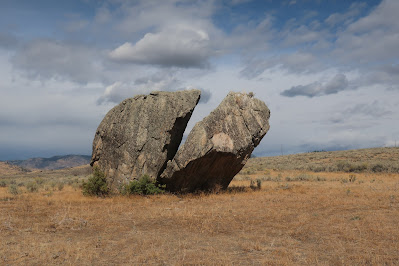 The rock was sitting atop one of several glacial terraces and is a glacial ice transported rock. It is a local rock so does not meet the technical definition of 'erratic'. The rock is Tonasket Banded Gneiss, part of the Okanogan Metamorphic Core Complex of north central Washington.
Posted by Dan McShane at 10:36 PM 3 comments: