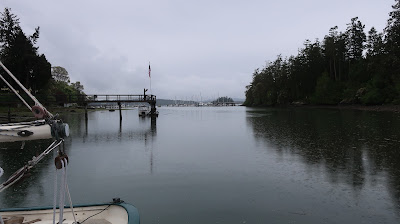 San Juan County used some grant money to replace the bridge across the upper part of the inlet a couple of years ago. 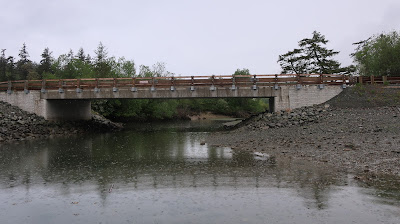 The first bridge across the inlet was built in 1915. This latest bridge replaced the span that had been built in 1970 (deer-harbor-bridge) and is a wider structure. The project was partially significantly supported by a Nearshore Ecosystem Restoration Project. By widening the estuary opening and removing a rocked bottom under the old bridge, the estuary is supposed to drain more freely and recover some of the original habitat features.

The harbor got its name from Hudson Bay Company hunters as the site was apparently a good deer hunting site. One of the early Hudson Bay hunters, Louis Cayou, stayed on and married a Lummi Indian. His name can be seen on an early survey and was later the name given to the estuary at the head of the inlet. 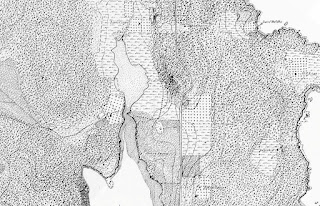 I do feel very fortunate that my field work includes periodic trips out to the San Juan Islands. 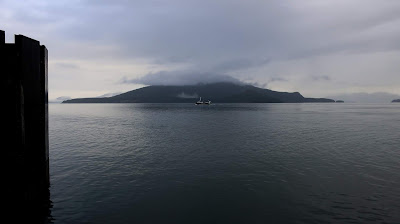 Before leaving the dock at Anacortes on the early morning boat 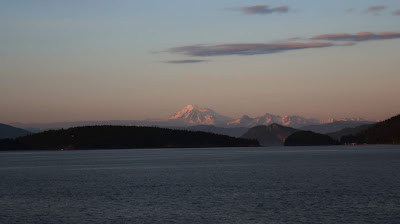 Mount Baker and the Twin Sisters and Obstruction Pass 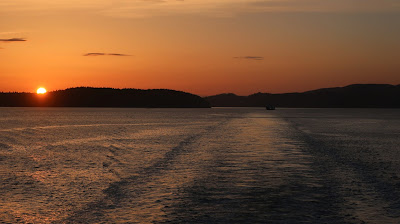 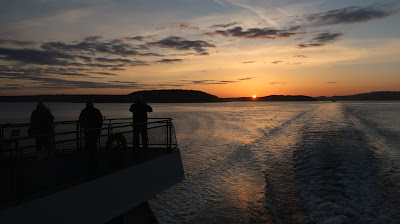 Other passengers enjoying the trip and views 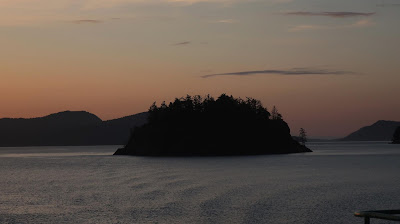 View and Notes on Racehorse Slide

I had a nice view of the Racehorse Slide (cool-oblique-lidar-image-of-racehorse) (first-description-of-racehorse-slide)on a recent trip up the Nooksack River valley. If the clouds and rain are not low, the slide area can readily be seen. 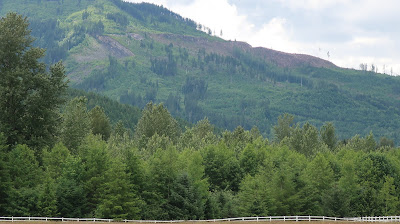 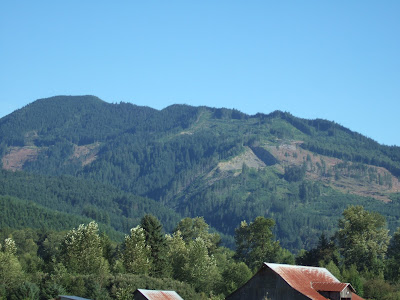 I marked up the next picture with the arrow indicating the area of the block that detached and slid as down into the lower Racehorse Creek canyon in 2009. The headwall area of the older and much larger slide that spilled out across the Nooksack River valley is marked with a dashed line. Note that additional logging has taken place between 2015 and 2018 along the southwest side (right in the picture) of slide. 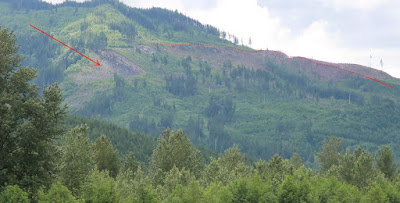 Logging had taken place on and adjacent to the 2009 slide shortly before the failure took place. As can be seen in the photograph above additional logging has been taking place along the older large slide headscarp and along a block that has remained attached on to the right of the slide. That block is located on the south side of the slide. 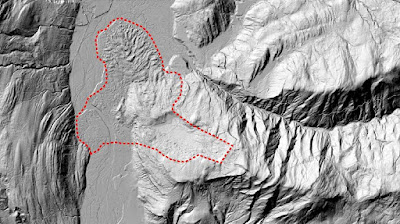 The impacts of logging on large deep-seated landslides is uncertain. It certainly is not positive, but a direct connection between logging and reactivation of deep-seated bedrock landslides has not been firmly established. The 2009 slide was certainly coincidental with the logging that had taken place, but it also took place during a very intense rain on snow event that was likely on the order of a 25 to 50 year event. Estimating the water input difference between the slope harvested and not harvested  might be an informative exercise. I am not aware if anyone has tried this. The land in question is managed by the State DNR.

Notes on the Culvert Case Being Upheld

The Supreme Court split 4-4 with Kennedy sitting out. Hence, Washington State will need to proceed with fixing fish blocking culverts as previously ordered by the the US District Court.

Not much to read as with a split opinion there is no decision to be written and no dissent.   no https://www.supremecourt.gov/opinions/17pdf/17-269_3eb4.pdf

The knkx.org story here is a good summary of the result.

Various parties had press releases. Bob Ferguson has perplexed some with his position and taking this case to the Supreme Court in direct conflict with the position of the governor and the Washington State Lands Commissioner of Public Lands.  I add a bit of commentary at the end and will do a future post with a bit more. In any event, the lower court ruling standing is a big deal.

"Today’s ruling brings a resolution to a case that has gone on for nearly 20 years, defended by multiple attorneys general. It is unfortunate that Washington state taxpayers will be shouldering all the responsibility for the federal government’s faulty culvert design. The Legislature has a big responsibility in front of it to ensure the state meets its obligation under the court’s ruling. It’s also time for others to step up in order to make this a positive, meaningful ruling for salmon. Salmon cannot reach many state culverts because they are blocked by culverts owned by others. For example, King County alone owns several thousand more culverts than are contained in the entire state highway system. The federal government owns even more than that in Washington state. These culverts will continue to block salmon from reaching the state’s culverts, regardless of the condition of the state’s culverts, unless those owners begin the work the state started in 1990 to replace barriers to fish.

I look forward to working with tribal governments to advocate for the funding necessary to comply with this court order, and to ensure other culvert owners do their part to remove barriers to salmon passage."

The cost impacts are relatively modest in the scheme of the entire state transportation budget. At issue was the State's obligation. That is not the same as the Federal government; Mr. Ferguson knows that, but wants to complain about the different treatment. Some have expressed concern that counties and cities may have to follow a similar path; however, that was not before the court and Mr. Ferguson is over simplifying the problem with other blocking culverts - the lower court already determined that issue and the State's position was vague.

"Today’s decision affirms that it is our collective responsibility to ensure the survival of Pacific salmon. This decision is fair under the letter of the law, but it is also just. Protecting salmon is an issue not just of importance to Washington’s tribes, but to all of us.

The time is now to think boldly about how we move forward on many fronts, including culverts.

My agency, the Department of Natural Resources, stands ready to work with tribes, state agencies, counties, private landowners and federal partners to restore and protect our treasured salmon.

It is time to stop fighting over who should do what. Instead, let us roll up our sleeves, stand shoulder to shoulder, and get to work saving our Pacific salmon for future generations. It’s time to do the right thing."

Based on previous statements by Ms. Franz, she gets that this issue is bigger than just the tribal fishing rights - expanding fish populations will benefit both tribal and non tribal fishers. 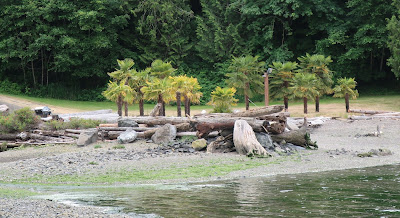 Palms in gardens in the Pacific northwest are always a bit of a surprise. They just seem so out of place. This stand of palms is on the coast of Key Peninsula, part of the complex of inlets that make up of the southern end of the Salish Sea/Puget Sound.
Posted by Dan McShane at 9:02 PM 2 comments:

A few weeks ago we had a stretch of weather where the rain came not out of the west but from a low pressure system in Oregon which wrapped the atmospheric flow around to flow into western Washington from the southeast. The result in northwest Washington was some turbulent clouds coming over the North Cascades.

The result was a brief moment of remarkable lighting. The western sun lighting the twin dogs with the Twin Sisters rising above a low cloud bank. 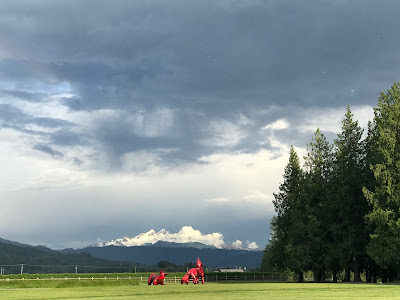 View of the Twin Sisters from the Nooksack River valley