Interesting article in the New York Times on large cities in seismic zones.

http://www.nytimes.com/pages/world/index.html
Posted by Dan McShane at 8:05 AM No comments:

Dave Tucker has a great web page http://nwgeology.wordpress.com/ (also on the Reading the Washington Landscape blog role) with field trips in our area that is well worth taking a look at for trip ideas and understanding the geology of our area. He describes several spectacular erratic rock locations in the area including some of my favorites and a few that I will have to visit. Thanks Dave, this post has been inspired by you.

Erratics are rocks that are out of place. Erratics have been transported by glacial ice to a new location where they are out of place. Erratics can be small, but the big ones seem to capture the imagination of geologists and non geologists alike. My wife Lisa describes the erratics on the Waterville Plateau in central Washington as “crazy, weird”.

I frequently look closely at erratics in glacial deposits on the Olympic Peninsula to determine if the glacial units I am looking at came from glacial ice from Canada or the Olympic Mountains. If I see granite, the odds are the unit was derived from ice that originated in Canada.

The Puget Sound, Strait of Juan de Fuca area and the northern tier of eastern Washington have all been glaciated multiple times over the past couple of million years. Hence, glacial erratics are a common feature in these areas. The most out of place erratics are the boulders that got rafted on ice bergs in the ice age floods that swept out of glacial Lake Missoula across eastern Washington and down the Columbia River. Several very out of place rocks can be observed in the Willamette Valley south of Portland from these flood rafted ice bergs. Erratic Rock State Natural Site is one spectacular example. 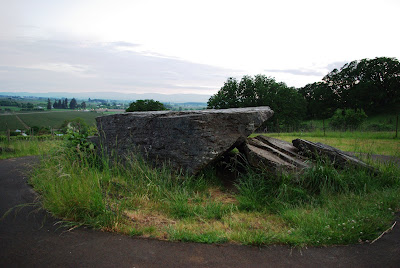 Erratic Rock Oregon State Natural Site (photo from Wikimedia Commons)
Another great spot for erratics is the northern portion of the Waterville Plateau in central Washington. Part of this area has been protected under the National Natural Landmark program. Erratics make National Natural Landmark status! My wife Lisa and I love that area and some of the erratics have been the subject of a series of winter landscape paintings Lisa has done on the Waterville Plateau. 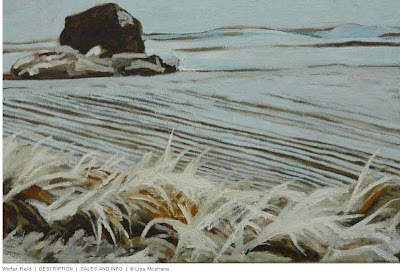 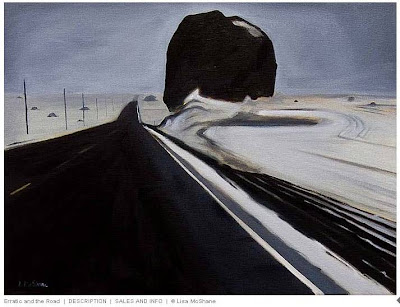 Erratic and the Road
(Copyright Lisa McShane http://www.lisamcshane.com/Artist.asp?ArtistID=24358&Akey=G4YBGL8X)
Despite having observed many glacial erratics, I never get tired of seeing them and have a few favorites. While the erratic pictured below might not be the biggest, its position is crazy, weird. 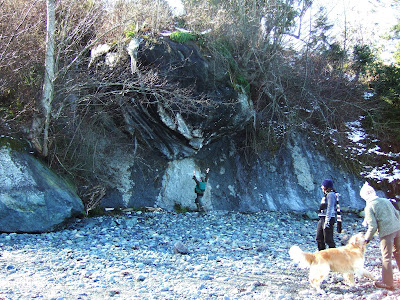 Erratic ready to be cradled by Bob Bailey in case it falls out of glaical drift at shoreline northeast of Biz Point, Fidalgo Island, Skagit County.
Posted by Dan McShane at 10:26 AM 1 comment:

My last post on Sumas Mountain and LIDAR indicated that a fault could be observed in the LIDAR image. So here it is. It is my understanding that the initial LIDAR in this area was done to assess river channels on the Nooksack River and someone noticed a straight line on the image. 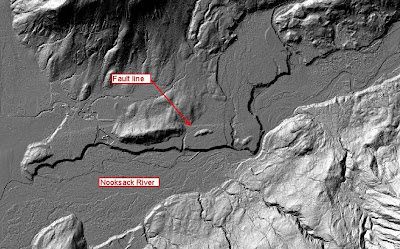 LIDAR has proven to be a huge help in identifying faults in western Washington. The glaciation of the Puget Sound region as well as the preponderance of thick vegetation has made identifying surface faults very difficult. The identification of surface faults in the Puget Sound region got a big boost when LIDAR began to be used.
A big break came in 1996 when the Kitsap Public Utilities District funded LIDAR mapping of Bainbridge Island in order to get a better handle on the water resources on the island. Greg Berghoff with the District noticed a line cutting across the south portion of the island in the LIDAR image and notified geologists at the University of Washington. This caused a great deal of excitement because the line happens to coincide with the Seattle Fault zone and indicates that the ground surface had been off set substantially since the end of the last glacial period. 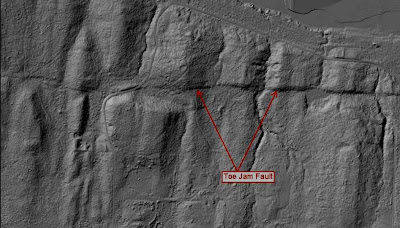 Toe Jam Fault on south Bainbridge Island
The trenching experts came in and excavated trenches across the scarp, pieced together disrupted soil horizons and age dated the off sets with carbon. What they found is probable magnitude 7 quakes had taken place along this fault scarp. While large quakes are known to be a risk in Washington State, this discovery recognizes large quakes in close proximity to large population centers are a very real risk. Hence, the Washington State Department of Transportation simulation of what could happen to the Seattle waterfront and the viaduct is very possible as this fault strand is just a few miles from the Seattle waterfront and fits the description of the type of event that would take out the viaduct.
Another fault appears evident across the water to the southwest in the port Orchard area. Both of these faults appear to be associated with the Seattle Fault Zone. It appears that the Puget Sound region has several fault zones. These zones consist of several fault stands instead of a simple single fault line. It may be that only a few of the earthquakes actually cause surface ruptures that will show up on LIDAR imagery. However, the presence of surface ruptures indicates that shallow quakes are possible and allows for estimation of the size of potential quakes associated with these fault zones. 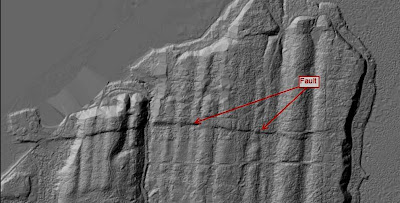 Scarp off setting drumlins, Port Orchard area
As noted a fault scrap was identified in Whatcom County near the Kendal area using LIDAR. This “new” fault caused some interesting dialog between the local media and geologists at Western Washington University. The Western geologist commented on an Environmental Impact Statement (EIS) regarding development of the Bellingham waterfront. One of the issues they raised was concern about the presence of nearby faults including the newly identified fault near Kendal that had not been identified as a potential risk to waterfront development. Much of the waterfront has been constructed on poorly consolidated fill and significant portions are liquefiable. The Bellingham Herald was highly critical of the comments claiming that the information the geologists provided was “nothing new”. The lesson I took from that is that policy makers and those that influence policy may be aware of a potential large subduction zone earthquake, but are unaware of the risks posed by nearby seismic events on much smaller but dangerous faults located near population centers.
In that regard LIDAR has been a huge help and the Seattle media seems to be highly aware of the risk. Perhaps it helps that the Seattle Fault zone is named after the City of Seattle. That said taking a look at Google Earth should show how lateral spreading due to soil liquefatcion can impact an area.

Posted by Dan McShane at 3:23 PM No comments:

Italian landslide caught in the act

Footage via the BBC of landslide in southern Italy. 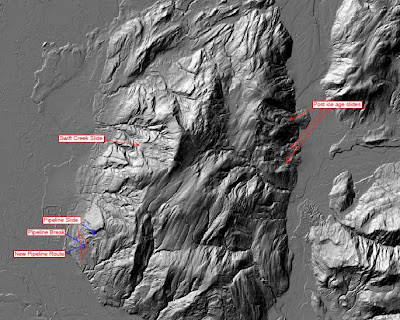 LIDAR Sumas Moutain
LIDAR (Light Detection and Ranging) http://en.wikipedia.org/wiki/LIDAR provides a bare earth image of the earth. LIDAR has proven to be a very useful tool for identifying large landslides and fault lines as well as a number of other key geologic features that are otherwise very hard to see in our heavily forested western Washington landscape. The LIDAR image of Sumas Mountain has taken up a lot of my time trying to figure out a very complicated mountain. I have used the LIDAR of Sumas Mountain for work, for geology curiosity and for just plain fun. One could plot out a bunch of field trips using LIDAR.

Sumas Mountain is located approximately 10 miles northeast of Bellingham near the Canadian border. As noted in a previous post title Whatcom County’s Desert, the Swift Creek landslide is located on the west slope of Sumas Mountain. Another post showed a LIDAR image of the slide.

The large image of Sumas Mountain shows other large scale slides on the mountain and a lot more! Only a few of the more obvious landslides are marked on the photo, but there are others and there are plenty of other features including plenty of drumlins, alluvial fans, an old sea level strand, bedrock structures, old river channels, a glacial outwash river valley, kettles and a fault line. The fault line was not identified until LIDAR imagery of the area was produced. See if you can find the fault. I’ll save it for a future post. Below is a closer view of some post ice age slides. 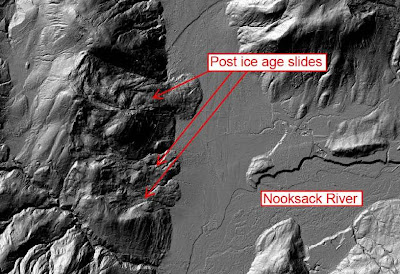 Post ice age landslides
The three large slides are each approximately 1,500 feet high and are deposited on the valley floor of a now abandoned glacial outwash valley. All three of these slides involve bedrock failures on a very steep glaciated valley wall. The slides are also located very close to a recently identified active fault line. I worked on a project to the north of these slides a few years ago prior to LIDAR. LIDAR would have made the project a lot less stressful. 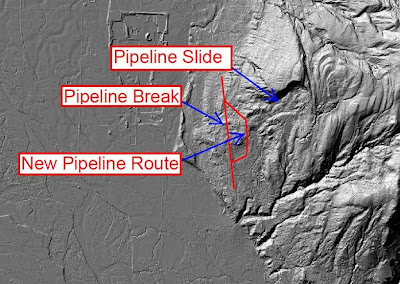 Natural Gas Break Site
Approximately 10 years ago a large natural gas transmission line ruptured. The break ignited and lit up the area for about half an hour. Ground fractures to the north and south indicated a deep landslide was responsible for the slide. This was a previously unidentified slide. The pipe was rerouted further up the slope. At the time there was some debate as to whether the new route was off of the landslide or simply moved off of a portion of the slide that had moved. Whatcom County geologist Doug Goldthorpe thought the pipe was still on the slide and pushed for monitoring equipment to be installed. I reviewed some drilling records with cone penetrometers and agreed with Doug that the failure of the slide was beneath the new pipe route as well. We did not have LIDAR to review at that time, but looking at the image now, it appears that this is a complex deep slide structure that involves bedrock.
Posted by Dan McShane at 5:36 PM No comments:

I have been out of the office but having some fun 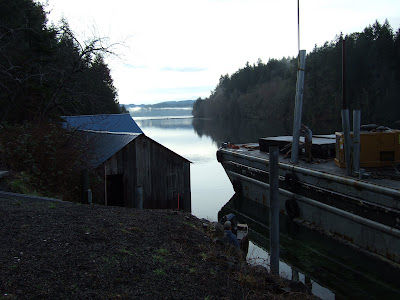 Fisherman Harbor at the tip of the Toandos looking out to Hood Canal and getting ready to drive another steel pile
Posted by Dan McShane at 6:40 PM 1 comment:

I came across this video recently. I don't know much about the parameters of the model but a great demonstration of soil liquefaction and flow along a waterfront area. Piers do not hold up very well under flowing soil conditions.
http://www.youtube.com/user/wsdot#p/u/12/hos_uIKwC-c
Posted by Dan McShane at 2:20 PM 2 comments: