I had a venture into the Northwest Cascades that included a chance to check a couple of old quarries. The quarries were readily apparent in lidar bare earth imagery, but a bit obscured on the ground as the forest had grown up around them. The first quarry mine floor was being pioneered by a mix of cottonwood and red alder trees. 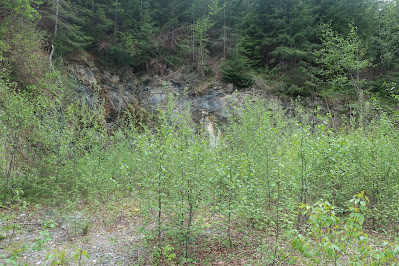 The geology of this area east of the South Fork Nooksack River is mapped as Darrington Phyllite and glacial drift and the quarries were in both formations with the one pictured above being in the Darrington Phyllite. The quarry exposed the highly deformed phyllite that includes a range of tight folds, kink bands and mini slip zones. 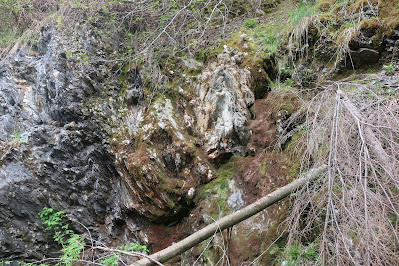 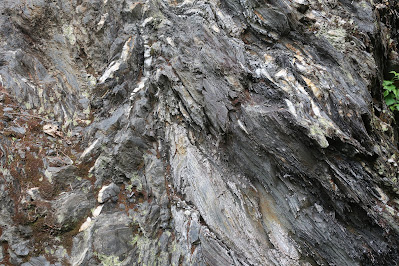 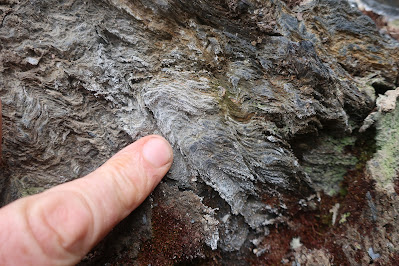 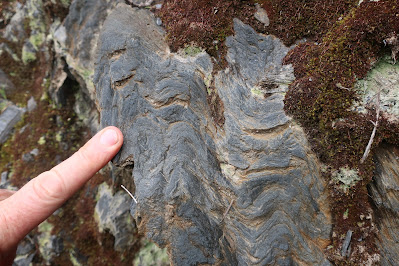 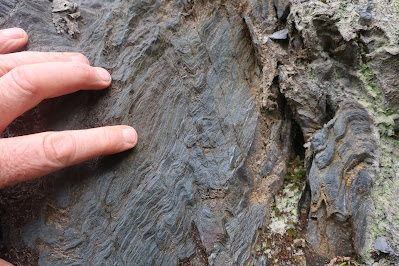 The Darrington Phyllite covers an extensive area of the Northwest Cascades with outcrops from as far east as near Marblemount to the west end of Samish Island. The same multiple deformation fabrics I observed at the quarry are also present miles away at excellent exposures on Samish Island. Dunhan (2010) working from excellent exposures on Samish Island did a detailed analysis of the deformation including how the kink bands so prominent in the formation developed.
The Darrington is part of a larger terrain, the Easton Metamorphic Suite, a tectonic terrain of ocean crust that accreted to North America about 140 million years ago. The Darrington is mostly former mudstone that has been metamorphosed into phyllite. The multiple deformations in the Darrington represent different tectonic events in the history of the Easton Suite. Metamorphic minerals within the former ocean floor basalt record one time very deep burial of these rocks indicating the Easton Suite went deep down the subduction trench. Further deformation would have taken place when these rocks were exhumed or uplifted out the deep burial in the trench and then deformed yet again when subsequent tectonic events emplaced them in their current position with additional deformation during the most recent mountain building events. A hard story that has taken time to piece together by lots of geologists with still much to resolve and interpret.
Just to the east of the quarry the geology changes abruptly into an entirely different tectonic terrain, or more appropriately multiple tectonic terrains termed the Bell Pass Mélange. In the midst of the mélange of terrains is a large block of dunite derived from the mantle of the planet. This block of mantle forms the jagged peaks of the Twin Sisters Range. The Twin Sisters were in and out of the clouds during my venture. 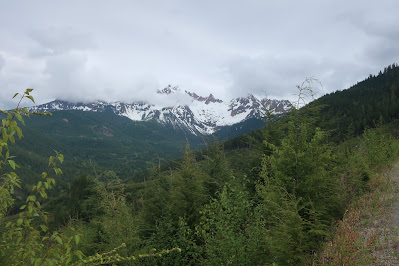 Last week while on the Waterville Plateau in central Washington I observed a bit of a dust storm to the east in the early morning. 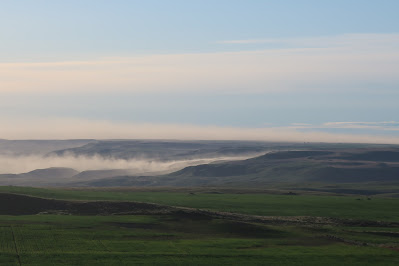 The dust blow was from an area that burned last September that is also underlain by glacial lake sediments. Glacial ice from the Okanogan ice lobe blocked the Columbia River forming a large ice margin lake. The lake sediments are very fine grained and readily will erode via both water and wind from areas of disturbed ground. 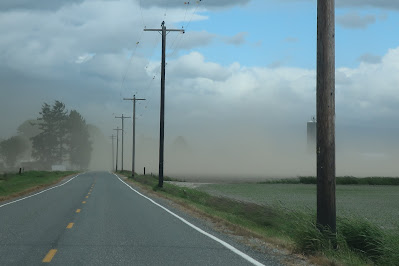 April and May have been dry on the Skagit delta/flats and the fields are drier than usual. This is generally a good thing as wet springs can hamper getting out on these fields -- they are just above or at sea level (think Netherlands and dikes that keep the tide out). Most of the dust was from potato fields that were recently plowed. They get plowed pretty deep and pretty late with some not yet planted. However, one corn field just sprouting was kicking up dust as well. The pictures are from between Edison and Allen, northwest of Burlington. 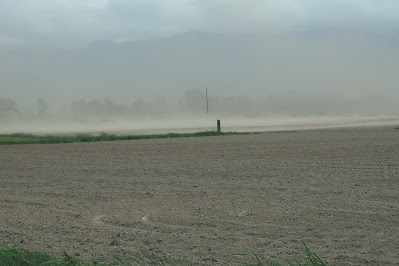 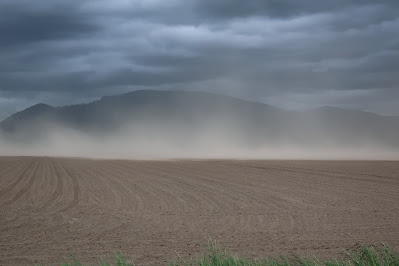 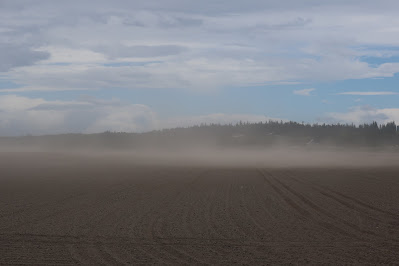 Dust lifting off field with Bayview Hill in the distance 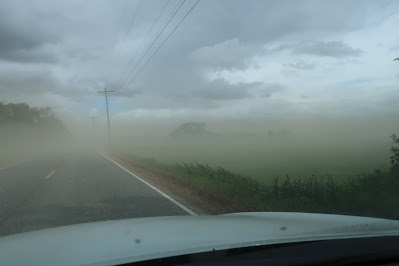 Driving across the Samish Flats was an eastern Washington experience 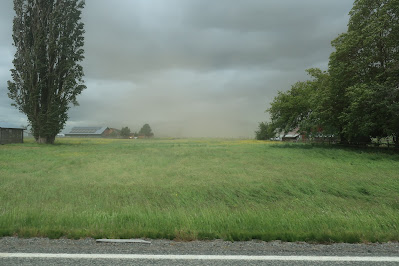 The dust blow lasted a few hours but ended as the wind calmed a bit and spring shower passed through. 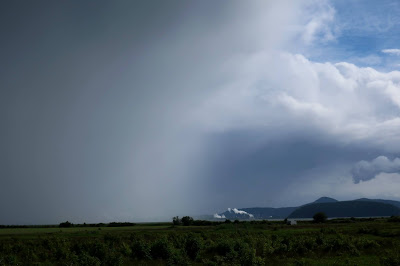 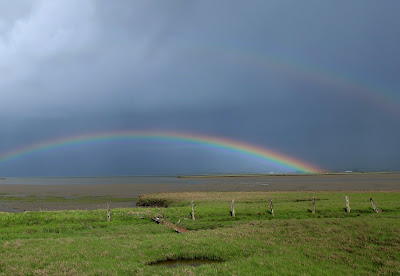 I sent a few pictures to Cliff Mass and he has a write up on today's wind event: dust-storms-on-both-sides-of-cascades. Cliff included some pictures from the Tri-City area, a place where I experienced my share of dust storms.

Josh Ritter starts a song that is apt for dust storms and farming: "Dirt roads and dryland farming might be the death of me. But I can't leave this world behind" Josh Ritter - Lawrence, Kansas. I will just note that all the rain in Skagit winters precludes dirt roads in the farm land.

Posted by Dan McShane at 9:25 PM No comments:

Late Low Snow and Rosie Has a New Baby

On Monday I headed to central Washington via the Highway 20 across the North Cascades over Rainy Pass and Washington Pass. A cold rain was falling in the late afternoon as I crossed the passes. The sky cleared by the time I reached the Columbia River at Pateros so I opted for camping at a favorite site that will remain secret. When I got into my sleeping bag it was 63 F -- a bit warm for sleeping, but by morning it was 36 as the cold air caught up to me.

It was hard to tell as the mountains still have lingering late snow, but it looked like there was fresh snow on the North Cascades in the morning. 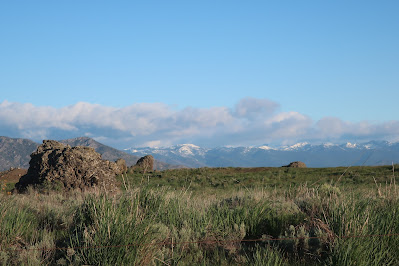 I had to head back Tuesday and noted the fresh snow on the trees and peaks on my return. 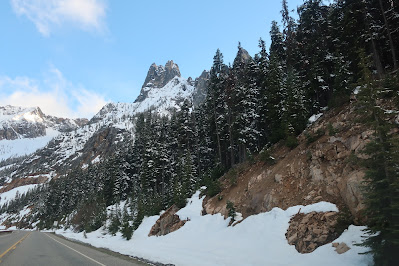 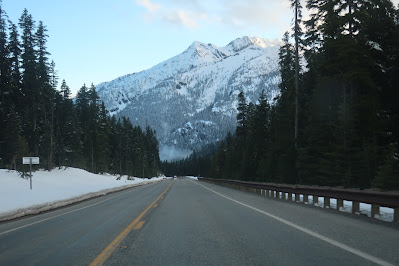 View of Fisco Mountain while descending from Washington Pass 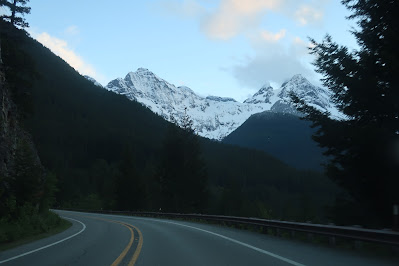 View of high ridge between Colonial Peak and Pyramid Peak on the descent to the Skagit River
Late Wednesday even Lyman Hill at 4,000 feet in the Northwest Cascades had a dusting of snow on its upper slopes added to the older snow on the clear cuts. 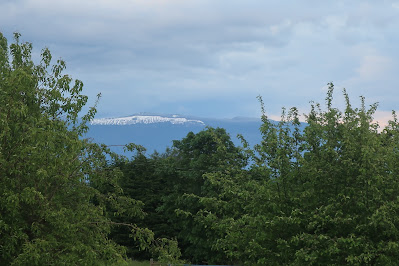 Our neighbor Rosie delivered as least one fawn on Wednesday. Three years ago Rosie somehow got her nose torn up; hence my name for her. She typically has previously had twins so another may be on the way. Our other neighbor, Blackie, has not made an appearance yet, but I expect she will be around with her fawn or fawns soon. 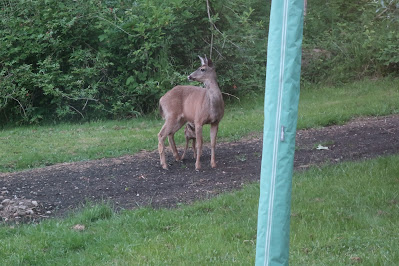