Foster Creek drains the north side of the Waterville Plateau. The creek has three forks that join together a few miles south of Bridgeport before discharging to the Columbia River just below Chief Joseph Dam and just east of Bridgeport. State Highway 17 follows the East Fork up to the glacier scoured upper northern part of the plateau. As the creek descends down for the glacial scoured upper plateau it descends through an area of glacial lake sediments deposited in the valley from the ice dammed Columbia River Martin (2001). The fine silts are subject to rapid erosion and over a stretch of the valley has formed a badland area (mini-badland-southeast-of-bridgeport).

When the creek reaches the glacial lake sediments, the creek is subject to forming deeply incised arroyos. Blanton (2004) discusses the complexity of arroyo development and riparian management along the West Fork of Foster Creek.

One of the issues of arroyo development is the deeply incised stream lowers the water table along the creek except in the bottom of the arroyo. That reduces the width of the riparian zone and the beneficial habitat (note that the arroyo banks have beneficial habitats as well such as burrows for cliff swallows). The lower water table and narrowed stream channel also impacts down stream sections of the creek. More intense peak flows during storm events or snow melts can be one result or the reverse: a loss of storage in the areas of the lowered water table may mean lower flows in the dry periods.

An approach to back up the water is to copy something that has been missing in the watershed. Jay guided me to a project on Foster Creek that is being used throughout the west -- a beaver dam analog. 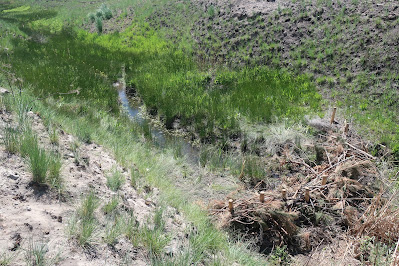 Beaver dam analog
Stakes driven into the ground with woody debris weaved through them
Posted by Dan McShane at 4:13 AM No comments:

Aerial views are part of my routine 'tool box' as a geologist. I use aerial photographs on a nearly daily basis for multiple reasons. Other aerial imagery is utilized as well - lidar, infrared and sometimes radar imagery. I enjoy this type of work and a there is a sense of discovery when viewing aerials.

I had previously seen the below feature when reviewing historic aerials for a project, and hence, when I got a view of it while flying out of Seattle knew exactly what it was. 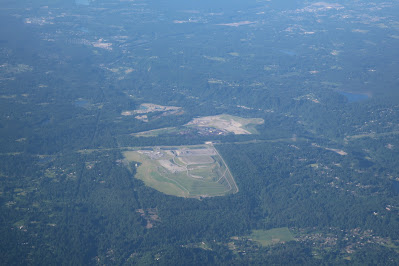 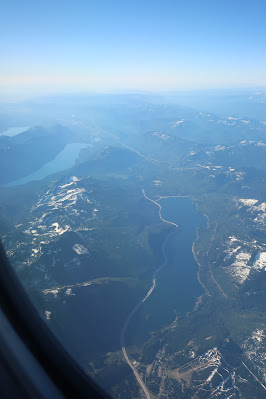 From right to left: Keechelus, Kaches, Cle Elum
Interstate 90 traverses along the left side of Keechelus
The Snoqulamie Pass ski areas are visible in the lower right
The three lakes are all part of the Yakima River watershed. There were natural lakes at all three locations associated with past ice age alpine glaciers that left depressions and moraines in the three valleys. Dams were erected at the outlets of all three to raise the water storage which is then metered out through the summer growing season in the Yakima Valley below. The dams should not be considered static features - they require ongoing maintenance and at times repair. All three dams are Federal dams managed and operated by the Bureau of Reclamation. 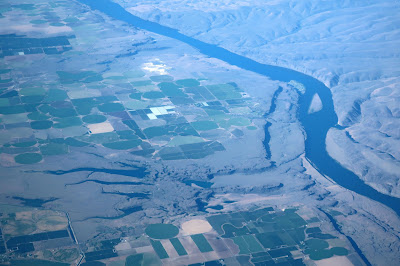 The western side of the Quincy Basin with the Columbia River to the right
The rocky ground with lakes are former spill ways from the large ice-age floods (quincy-basin-plumbing). The Quincy Basin is a major agricultural area in central Washington with irrigation water supplied via water routed from the Grand Coulee Dam through the former routes of the ice-age floods. On the upper part of the picture an additional flood spill way can be seen plus a whiteish area. The upper whiteish area is a site of a diatomite mine. The ice-age floods plucked off enough basalt to expose old lake deposits containing diatoms that are now mined. 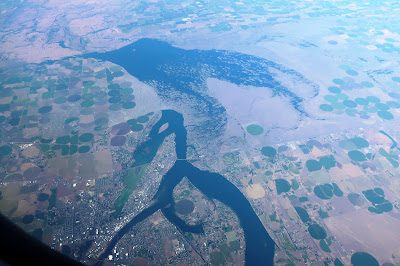 Moses Lake and Potholes Reservoir to the north
The east end of the Quincy Basin is drained through another ice-age flood route. Moses Lake is a natural lake formed in the deep flood water channels. Its depth and extent was slightly expanded by a small dam work at the outlet in 1911. Potholes Reservoir is formed by O'Sullivan Dam. The lakes receive natural water flow via Crab Creek, but the bulk of the water passing through now is via the water pumped into the upstream ice-age flood route of Grande Coulee and then routed via other reservoirs and canals to the Quincy Basin. 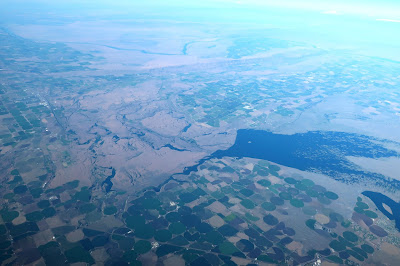 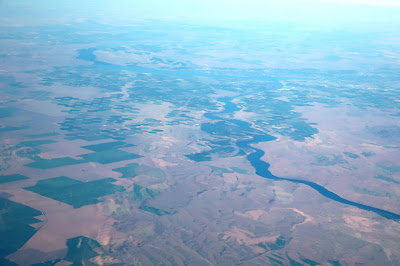 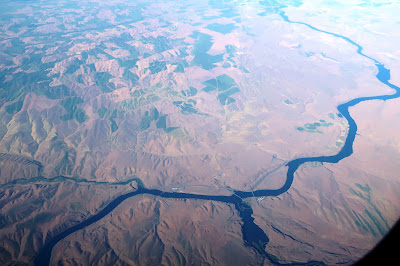 Lower Snake River passing through the Palouse
Most of the area along the lower Snake in Washington is not irrigated farm land as the river is a in a narrow steep rocky canyon for much of this river reach. The above image shows the slack water backed up by Lower Monumental Dam. The wide tributary is the Palouse River also backed up by the dam. The tributary on the left is the Tucannon River which drains out of the north side of the Blue Mountains. 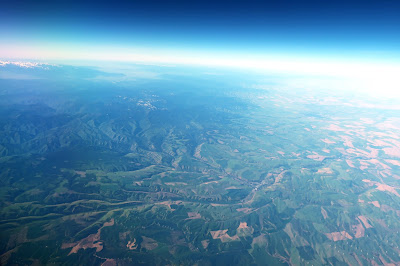 The high Palouse and Blue Mountains
The further east position and higher elevation means wetter areas. In June the eastern Palouse and the Blue Mountains are very green landscapes. here the moisture levels are high enough that dry land winter wheat can be grown every year versus the every other year pattern in the areas to the west and at lower elevations. That switch over line can be seen on the right portion of the picture.
If you blow up the picture above or better the one below another newer infrastructure feature can be observed. 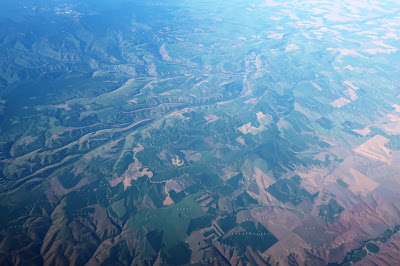 Rows of wind turbins line the upper ridges of the high Palouse in this area
One last infrastructure note beyond Washington Sate's borders: 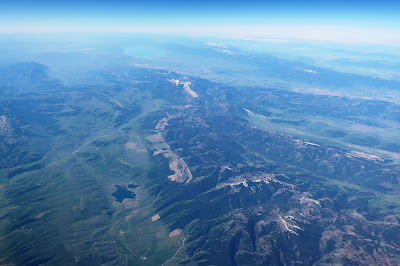 Surface mines along mountain ridges in southeast Idaho.
Bear lake in northwest Utah is in the distance
Extensive open pit surface mining has been taking place in southeast Idaho over the past 50 plus years. The mines are phosphate mines. Some of that phosphate may end up shipped to Washington farm lands as a critical fertilizer. This particular mine is a JR Simplot Smoky Canyon Mine. The phosphate ore is mixed with water and pumped via pipeline for processing in Pocatello, ID. This was the best view I have had of the scale of the phosphate mining in this area. Its impressive on the ground, but more so from the air.
Posted by Dan McShane at 9:04 AM 1 comment:

My preference even for long trips is to drive. But some trips do require flying. Initially the landscape is familiar and then becomes semi familiar. Looking down at the Lost River Range of Idaho (slight familiarity) I spotted a large landslide. 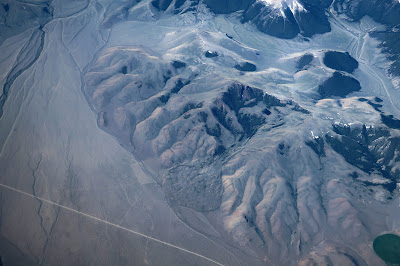 Carlson Lake Landslide
The slide is about 2 miles long with a headwall at about 8,500 feet elevation and the toe extending out onto the broad alluvial fan at an elevation of 6,700 feet. The slide took place within andesitic and basaltic lava flow formations.

Schaller (1991) analyzed this slide and obtained a radiocarbon date of 2,420 bp. However, Krueger (2014) utilizing Lake Carlson on the upper part of the slide for past climate analysis got an age date on the upper slide of 9,054 years. It is possible that the slide has had multiple periods of movement that would explain a younger age at the toe of the slide. The slide is located within an active seismic area - the Borah Peak Earthquake ruptured the ground over 21-mile long fault scarp on the opposite side of the Lost Creek Range.

The trip was a long trip that involved 2 bus rides, 5 planes and 3 trains to get to the destination, but glad to have made it.

Posted by Dan McShane at 4:33 AM No comments: 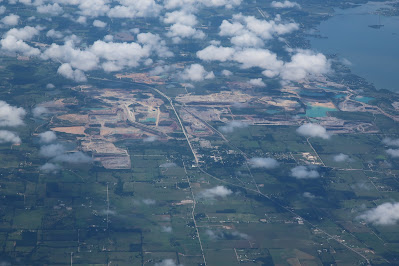 Complex of quarries that supply a community

Quarries for aggregate go through various phases on a local basis. Once a group of quarries gets established and the market supply is being met there is a period of stasis. But eventually the quarries exhaust the resource and new supplies must be found. Skagit County is going through one of those supply shifts and the disruption that goes with that change goskagit.com/opposition-continues-over-skagit-county-mining-proposals. The three proposed mine sites each has particular issues and regulatory status with the issues described in the article. Besides the three mines in the article another mine is proposed to expand, but apparently no significant objections have arisen yet and a fifth mine is in the early stages of the permit process.

An example of an excellent source of sand and gravel lost to use is Mercer Island in Lake Washington smack in the middle of an area of high demand in King County. 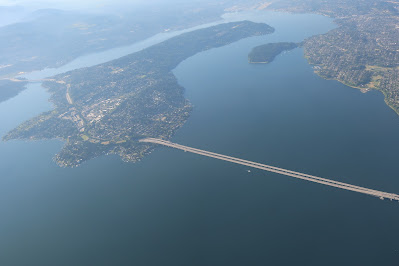 Mercer Island
Obviously when Mercer Island was initially developed there were plenty of resources elsewhere and development of the island proceeded and one could argue that delaying development of the island so a big chunk of it could be mined would not be an ideal scenario.
Skagit County took a very broad approach that utilized mostly geology to designate large areas of the county for mineral resource protection. There was some consideration of preexisting conflict so that some areas were pulled out of the protection zone. However, when mine sites enter actual permitting, it is very clear that conflicts are still present or issues still require attention. Just because an area is designated for protection does not mean a guarantee to be permitted to mine.
And there have been Skagit property owners that have sought to do the opposite of getting a mine permit, getting the property removed from designation as a mineral area. This can be done by demonstrating that the site is underlain by sand and gravel or that other issues would preclude ever being permitted to mine. One site was removed after the Planning Commission agreed that the site could not be mined due to the presence of high voltage electric transmission lines and a large volume natural gas pipeline. I would note further that the site was also underlain by a thick layer glacial till that was mostly silt and clay.
Posted by Dan McShane at 4:25 AM No comments: