The winters of 1996 - 1997 and 1997-1998 had a few weather events that triggered lots of landslides in western Washington. Many of these slides were shallow surficial slides particularly in early 1997. At several locations on the Toandos Peninsula on the west side of the northern side of Hood Canal very large, deep-seated landslides took place in early 1998. I have done a number projects at these big slide sites or walked by them on the way to other sites and recently had the opportunity to revisit one of the big slide sites.

I pulled up a series of aerial photographs from 1994 before the slide, from 2000 a couple of years after the slide and 2011 more than a decade after the slide. The red dot in the images (click image to get a larger image) marks the upper top edge of a landslide scarp I identified back in 1998. 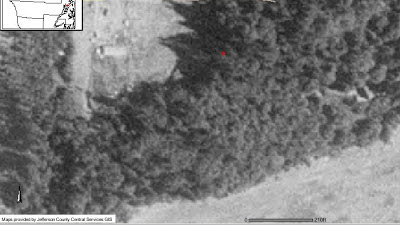 In 1994 most of the bluff slope is tree covered. The beach is located on the lower right portion of the image. But the 2000 aerial shows a much different picture. 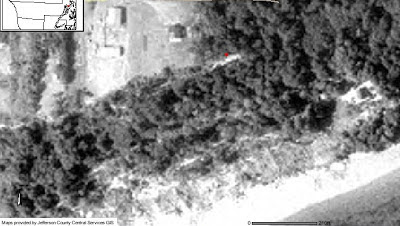 In the 2000 image the upper scarp is clearly visible. The land surface on the south side of the scarp had dropped approximately 15 to 20 feet. The entire tree-covered area between the red dot making the upper scarp and the treeless slope above the shoreline was broken up into a series of scarps and crevice-like features not at all unlike a glacier. The lower end of this slide calved off over an approximately 80-foot high bluff. I witnessed some these calving off events while visiting a nearby site - Unfortunately pre digital camera with video. 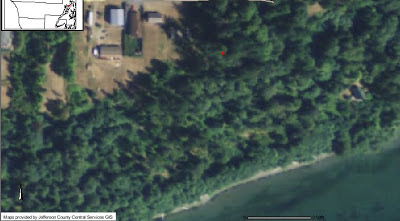 By 2011 the readily apparent fractures seen in the 2000 aerial had disappeared as trees grew and the forest canopy blocked the aerial view. This is one of the challenges of aerial images in assessing landslide histories. Back in 1999 LiDAR was not available for the area. But the LiDAR image clearly shows the hummocky nature of the slope between the headwall scarps and the top of the shoreline bluff. The shoreline bluff is defined as the dark band angling across the lower left portion of the image. 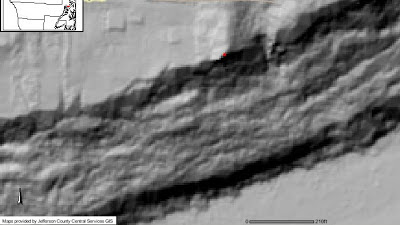 This section of bluff slope above Hood Canal is a long stretch of deep slides with a headwall scarp that takes some really big bites out of the upland. 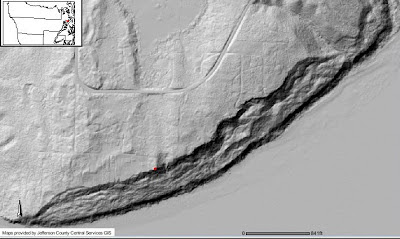 LiDAR of larger area
The red dot indicates the specific site I visited, but the big bites into the upland to the northeast give a sense of how big these failures can be. This slide is a bit complex with several things driving the failures: erosion at the shoreline, well drained compact sand and gravels overlying a nearly impermeable silt/clay, and an inherent structural weakness within the underlying silt/clay unit. The later failure mechanism is within preglacial silts and clays and at one location up the coast to the north there are some massive slide areas with headwall scarps as much as 1,500 feet inland from the shoreline.
This particular slide area got the attention of Jefferson County officials back in the early 1980s pre Critical Areas Ordinance days. The area was assigned a moratorium for building unless a geologist/engineer provided a report. A few reports have been completed with setback recommendations as reported with parcel tags ranging from 30 feet to 268 feet.
I have looked at this slide on several occasions. Thus far I have written only one report on this particular slide complex and that report was a bit to the northeast and I was more conservative with my setback distance recommendation than the numbers I found on the County web page and I even added a further caveat that I do not typically use regarding reassessment of the site post new scarp or upland fracture development.

Periodic very wet periods will cause these slopes to fail on going erosion. But then throw a quake with a good jolt to these slopes and use your imagination or quantitative (with assumed or measured values) slope models.
Posted by Dan McShane at 8:22 AM