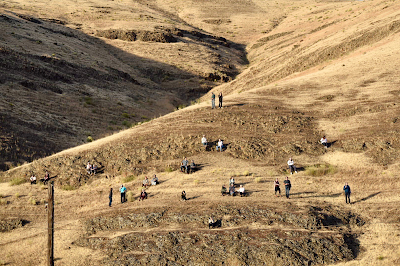 On the hillside listing to https://www.inalandscape.org/ (Picture from Happy New Year from IN A LANDSCAPE). I was on the hillside for part of the concert.

A highlight this past year was returning to Starbuck, Washington to listen and watch and an outdoor classical piano concert (starbuck-in-landscape). I passed through Starbuck several times this summer and a return trip for the show was well worth it. While a classical concert is a rare event in Starbuck, the cafe in the former drugstore is always worth a stop. 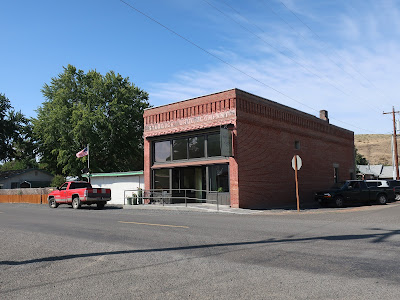 IN A LANDSCAPE sent a New Year Greeting to the Starbuck concert attendees. I enjoyed seeing the poem about the Tucannon River, the river that flows through the town. 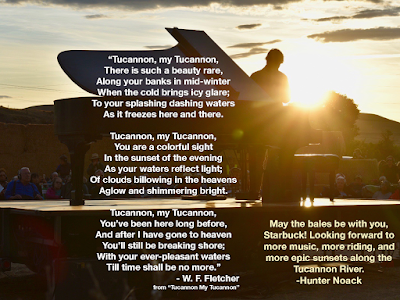 A trip to the Tucannon when I young sparked some of my early interest in geology. A sory for another day. 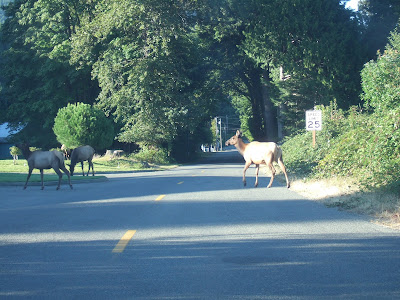 The elk were loitering around the town of Brinnon. Brinnon is located along the west side of Hood Canal on the east side of the Olympic Range. The town is at the delta of the Dosewallips River. The river is only about 22 miles long, but its source area is over 6,000 feet in elevation. The river forms a deep steep-sided mountain valley just above the town providing excellent Elk habitat. The town itself also provides habitat. The bulk of the herd was favoring the fire station on the day of my visit. 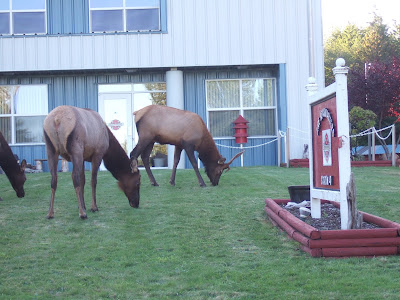 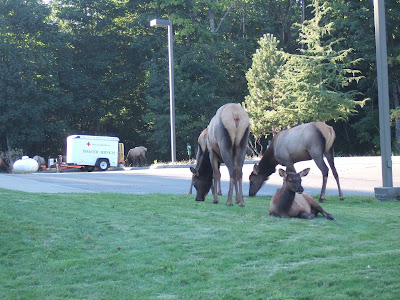 Waterville is marked with the small red star

The result shows that there is a lot of area in Washington State that is higher than Waterville. Much of the higher ground is mountainous and the mountains are mostly steep and rugged. Another factor is that Washington State does not have any incorporated ski resort towns despite, or perhaps because of, the large amount of snow fall (Mount Baker Ski area holds the world record annual snowfall).

The north central portion of the state is also mountainous with deep valleys, but also has areas of high country that are moderately sloped with numerous county roads as well as State and US highways crossing the high country. The area has been (and some hope will be) an ore mining area with some mine sites at over 5,000 feet in elevation. Indeed there are a numerous town sites in this area from the long mining history.

Several of these town sites exceed Waterville's elevation, but none of them are incorporated. Molson, near the Canadian border is over 1,000 feet higher than Waterville; Molson is at an elevation of 3,718 feet. However, Molson was a short lived incorporated town associated with a mining boom in the area and is now a ghost town. Several buildings remain as well as an open air outdoor museum. Wauconda, is another unincorporated ghost town that is higher than Waterville. Wauconda does have a post office that covers the large geographic area around the former town, but there really is not much to call a town anymore.

The southeast corner of the state consists of the Blue Mountains another area of elevation exceeding Waterville. The Blues in Washington State are a high plateau rising up a steep western slope east of Walla Walla with very deep and very steep river valleys. However, the back, eastern part of the Blues has a broad area of high country with fewer deep canyons. Anatone is a small town with a post office in the wheat growing area and comes in well above Waterville. Anatone is at 3,571 feet. However, Anatone is not incorporated.

Note on the DEM above there is a very narrow and discontinuous band of higher ground on the very eastern edge of the state. This area is the highest area of the rolling hills of the Palouse that extends into Idaho. Exploring that band of ground on the eastern edge of state, I came across the Town of Farmington. Farmington is incorporated and the town notes on its home page that it is at an elevation of 2,626 feet. That is higher than the 2,622 feet elevation that Waterville has on its city page. Farmington does not make any claims about being the highest incorporated town - perhaps a missed tourist opportunity.

The elevations cited by both Waterville and Farmington are from the USGS topographic maps bench marks assigned to the towns. The towns are not flat. Waterville has a spot elevation on the map on the north edge of town at 2,645 feet. And the southeast corner of the incorporation boundary is just short of the 2,720-foot contour. Farmington's northeast boundary touches the 2,700-foot contour.

If one relies only on the topo map assigned elevation, Farmington is the highest incorporated town in Washington State. That said, Waterville has more area above the elevation of Farmington and its highest point is above Farmington's high point. That said there are parts of Waterville that are lower than the lowest point in Farmington. Perhaps it could be called a tie?
Posted by Dan McShane at 5:45 PM 3 comments:

As I approached Waterville this past week, I contemplated its place in regards to elevation relative to other Washington State cities and towns. 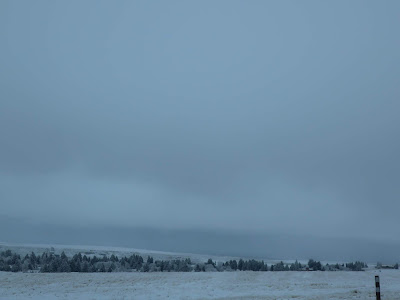 The approach from the west on Highway 2 involves a steady steep road grade up out of the Columbia River valley. The city with its trees stands out in contrast to the dry land wheat fields that surround the community.

Despite the wheat fields and rolling landscape around the city, Waterville is the highest elevation city in Washington State at 2,622 feet. Republic is a couple of hundred feet lower. Unless one of the ski areas incorporates into a small city, Waterville, a city in the dry land wheat lands of central Washington is the elevation leader.