In reviewing some historic aerials, I came across this aerial noting the Glen Echo Coal Mine. The markings were on a 1960s era photograph.
GOOGLE AERIAL VIEW 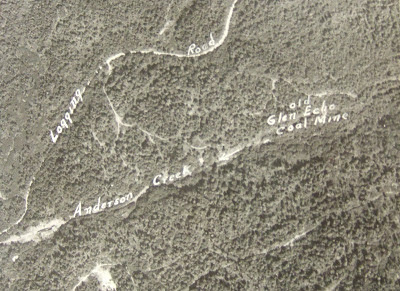 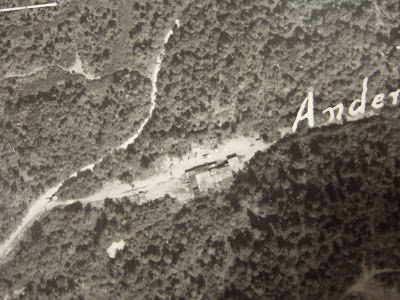 Close up view of the old washing plant
buildings near mine site reported by GM to have been used as a rendering plant
Looking Back by Dorothy Koert and Galen Biery provides an interview of the former owner, Joe Jussel, in their chapter the coal mining era in Whactom County. According to Jussel the coal seam was discovered in 1896 and opened in 1918. Jussel acquired the mine in 1942. Jussel ran the mine for only a few years before closing it. The mine closure was more related to a shift in energy economics in the Pacific Northwest as natural gas became available along with very cheap electricity.
The coal seams in Whatcom County are within the the extensive Chuckanut Formation a predominantly sandstone formation of Eocene age. The narrow underground seams could not compete with the cheap energy sources or with the large thick seamed surface mines elsewhere in the west. By 1954 coal mining came to an end in Whatcom County.
Coal has been very much in the news in Whatcom County with the proposed scheme to build the largest coal export facility on the west coast. If built, the export facility will ship coal from Montana and Wyoming.
Given the relatively thin local coal seams and the low value of coal, it is not likely that having a nearby export facility will respur coal mining in Whatcom County anytime soon. However, there has been some exploration interest in possible coal bed methane with exploartion wells drilled in the north part Whatcom County in the past decade. Perhaps the next big hot topic.
Posted by Dan McShane at 7:58 AM

Hi Dan,
The photo of the Glen Echo washing plant interests me. It looks to me that the buildings in this photo show the old A & M Byproducts rendering plant, owned by Charlie Helms, which operated up until a debris torrent damaged the buildings (circa 1980). I have a 1942 map of the property, and it shows the washing plant as a small building very close to the mine portal.
- George Mustoe

I will defer to you on this, I assumed the buildings were associated with the mine and further assumed they were part of the washing. Thanks

Dan - do you know if there was ever an area around Glen Echo mine that was called Glen Echo?

I found a WW II record that says the guy was born in Glen Echo WA and I can't find anything in WA called Glen Echo except the mine in Bellingham.

I have not seen any maps in the area with a reference to the name as a town name.