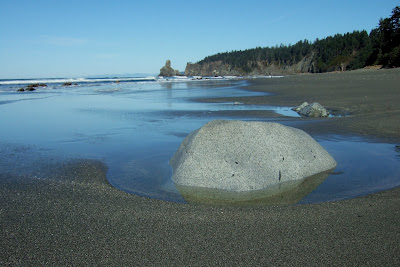 I came across this small boulder in the sand of Shishi Beach on the west coast of the Olympic Peninsula. My purpose that day was to reach some unusual bedrock outcrops, but this rock got my attention as I used the beach as my route to the outcrops of interest. The boulder is granitic (likely tonalite for hard core igneous people). However, I know of no granitic rocks anywhere on the Olympic Peninsula. This boulder hitched a ride on the Juan de Fuca lobe of glacial ice approximately 18,000 years ago. This lobe of ice extended out beyond the current coast line and this boulder derived from the coast range of British Columbia is a reminder of that period. The distance traveled is a minimum of 120 miles.


I always enjoy seeing rocks like this one as it reminds me of great adventures I had mapping and collecting rock samples within and along the margins of plutons in the British Columbia Coast range and crystalline core rocks of the Washington North Cascades. Who knows this small boulder may be a transported fragment of the Spuzum Pluton or Scuzy Pluton.

Some how this rock was sitting alone on the beach, but there were plenty of similar rocks along the upper beach where the bluff consisted of very boulder rich glacial till. 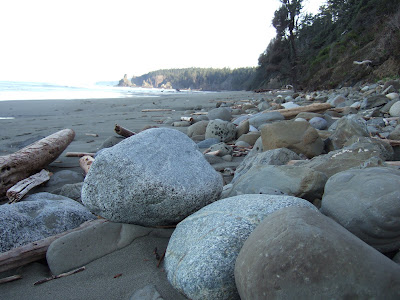 The boulders in the sand were not the only thing that got my attention. I was not the first to walk the beach that morning. I am assuming an otter, but alas I never saw the creature that made these prints. 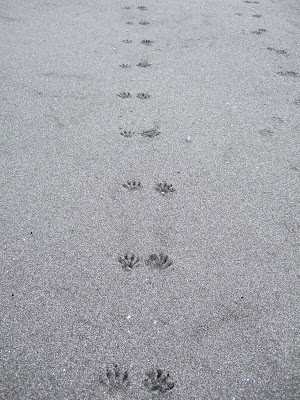 Big news out of Quilcene

Oysters at low tide, Dabob Bay with Toandos Peninsula on the right and Bolton Peninsula on the left.
I posted this picture of oyster beds on Dabob Bay at the upper end of Hood Canal before on a post regarding efforts to protect water quality for this very valuable resource. This large oyster crop covers hundreds of acres of tide flats. Last summer my wife and daughter were in Philadelphia. They called from the restaurant to tell me that Washington State Dabob oysters were on the menu. Shell fish are a very valuable Washington State industry.

Last week arrests were made by the Washington State Department of Fish and Wildlife and the Jefferson County Sheriff for theft of oysters and clams from both private and public tidelands in Dabob Bay and Hood Canal. http://ptleader.com/main.asp?SectionID=36&SubSectionID=55&ArticleID=26544
If it is true that theft was taking place, it was at a remarkably large scale and involved what appeared to be reputable companies. For several years my company shared an office building with an office of Washington State Department of Wildlife. I for one have always appreciated the work they do. They have a difficult task protecting our resources.
Posted by Dan McShane at 4:58 PM No comments: 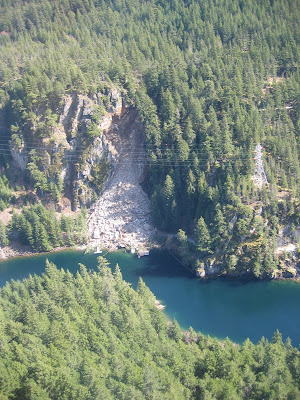 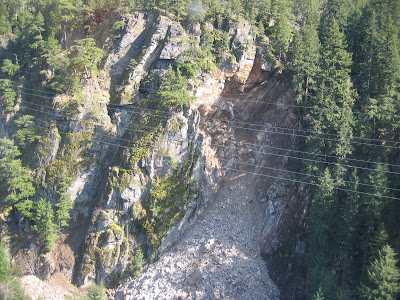 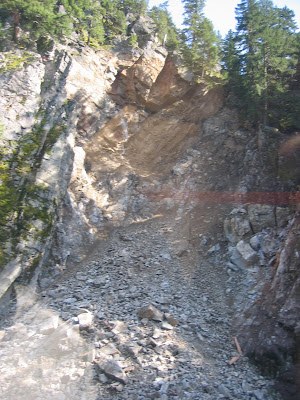 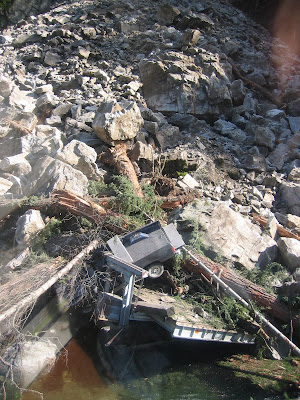 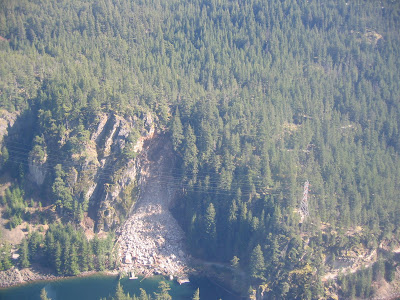 The slide took place in vertically foliated banded biotite schist and is part of Skagit gneiss complex. This formation consists of very highly metamorphosed sandstone that has been heated pressurized during deep burial during the Cretaceous. These rocks were buried as much as 30 km below the surface approximately 75 million years ago. The rock failure appears to be the result of a combination of vertical foliation with cross cutting horizontal joints. And of coarse the slope is a cliff and gravity and some freeze thaw will cause things to fall down. It won't be the last in this area of very steep slopes.
Posted by Dan McShane at 2:52 PM 2 comments:

The Chuckanut Range and Silver Creek Falls after Cole after Hannock

We live in a landscape where waterfalls are very common. They are truly works of art and are worth taking a hike to see. David Tucker’s Northwest Field Trips http://nwgeology.wordpress.com/the-fieldtrips/the-chuckanut-formation/silver-creek-stratigraphy-and-flood-erosion-in-the-chuckanuts/  suugests a great hike to a waterfall a short distance south of Bellingham. This is an outstanding winter hike that I have done twice this winter. David is putting together an excellent series of trips with many in my local landscape and is working on others throughout the state.

Silver Creek is located within what locals call the Chuckanut Range. This is a range of mountains uplifted in a series of folds between Bellingham on the north and the Skagit Valley to the south. Interstate 5 weaves through the range in the only stretch of mountains along the I-5 corridor in the state. The folded Chuckanut Formation creates a landscape somewhat similar to some of the Blue Ridge Mountains in the eastern United States with ridges of resistant sandstone and valleys underlain by weak shale and mudstone. The Chuckanut Range is not a high range by Washington standards, but it is rugged and is unique in that the ranges rises directly up out of the sea along the coast line south of Bellingham. This feature is often emphasized as the only place where the Cascade Range reaches the sea.

Google Earth view of Chuckanut Range between Lake Whatcom and Samish Bay south of Bellingham. Folded bedrock along anticlines and synclines is readily visible.
This rugged corridor between the Salish Sea on the west and the Cascades on the east has been identified by Whatcom County as a habitat corridor and there are a number of ongoing efforts to ensure this area stays undeveloped and utilized as forestry and park land. Those efforts include Blanchard Mountain on the south which will soon have a portion designated as a natural area with the commercial timber lands around the perimeter expanded to remove development risk. Washington State Parks protects significant tracts in the northwest portion of the range. Whatcom County has expanded its holdings within the range with several parks such as Pine and Cedar Lake and Squires Lake and is working with the Washington State Department of Natural Resources towards the creation of an 8,000 acre wilderness park within the Lake Whatcom watershed. 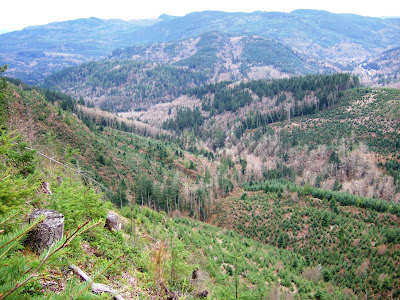 View of Chuckanut Mountain looking west from the slope of Lookout Mountain. Interstate-5 can be seen curving through the valley on the upper right. 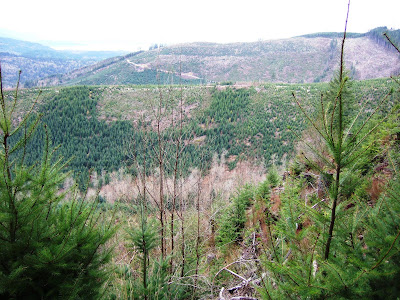 Resistant sandstone and conglomerate ridges within the Chuckanut Range.
As for the hike up Silver Creek it ends at a great waterfall. The water flows over an outcrop of conglomerate which breaks the flow up into a very nice visual effect. Additional falls are located above the main falls for those that like to crawl up steep slopes and through thick jungle. 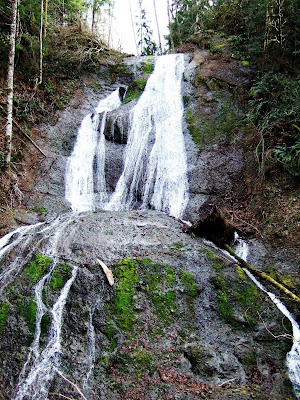 The main falls on Silver Creek 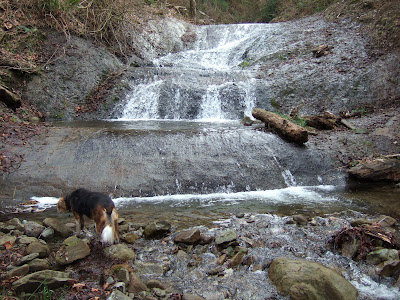 The next cascade above the main falls with Sam a dog with remarkable climbing talent. 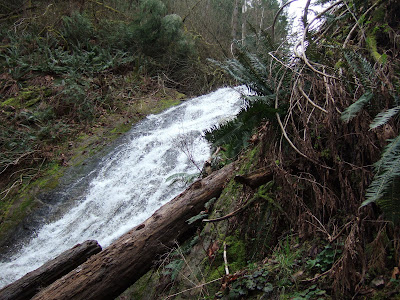 A lovey cascade or a barrier to be climbed 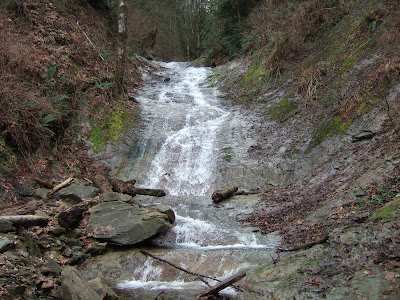 Cascade over Chuckanut sandstone
These falls reminded me of some of my favorite landscape painters and their rendering of Kaaterskill Falls in the Catskill Mountains of New York. Kaaterskill Falls is New York State’s highest with a combined height of 260 feet. I estimate the falls at Silver Creek to be about 90 feet so it is within the same magnitude and there are additional falls upstream of the main falls. Kaater means male wildcat and kill means stream. Cougars definitely live in this area so in that regard there is a link to Kaaterskill Falls as well.

Thomas Cole in particular moved landscape painting to a level that consistently captured the geology of a site and he is one of my favorite landscape painters. 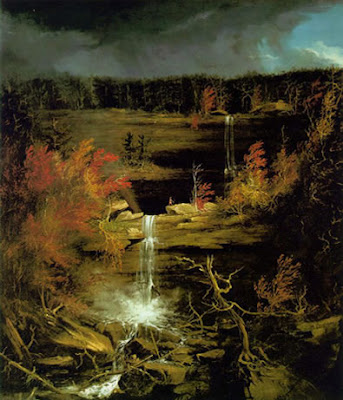 Thomas Cole - The Falls of the Cauterskill, 1826
Stephen Hannock also did a great job of rendering the geology in his painting of Kaaterskill Falls. His paintings have fascinating inscriptions and stories etched into the painting. Looking at his paintings can be like fossil hunting within the layers of bedrock or identifying the source of clasts in the conglomerate at the Silver Creek falls. 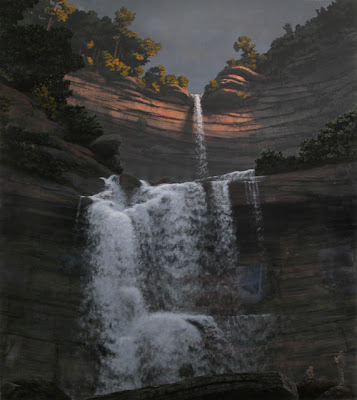 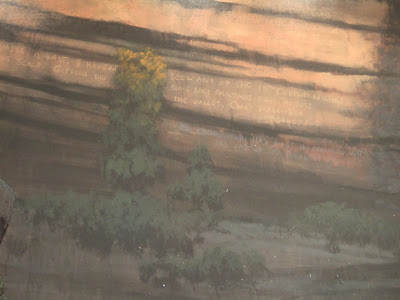 Detail with a reference to Cole’s work and others etched into the geologic strata.
While working on this post I found that my wife Lisa was rendering a view of the Chuckanut Range as most of us usually see it - from the Interstate.
Lisa McShane, 2010, Winter Highway Chuckanuts
http://lisamcshane.blogspot.com/2010/03/winter-highway-chuckanuts.html
Posted by Dan McShane at 2:02 PM No comments: