I used some digital elevation maps with color changes set to specific elevations to help visualize the Quincy Basin. The Quincy Basin is bound by the Breezley Hills on the north and the Frenchman Hills to the south. The Palouse highlands are to the east. High ground is located to west. This high ground is rather subtle and is immediately bounded to the west by the deep valley/canyon of the Columbia River.

Ice-age floods surged into the Quincy Basin multiple times with much of the water coming out of the Grand Coulee. Some flood waters also came in from the east that spilled out of the floodway south of Spokane and the Telford scabland spillway to the northeast.

This DEM shows how high the water or filled up the basin needed to be in order for the overflow at the northwest corner of the basin to form. (Note typo on map - should be Breezley)

With lower water levels (dark green) the northwest water exit would no longer be reached and hence is a much smaller coulee than those to the south.

The areas of high water flow are rocky ground and include bedrock stripped of soil or boulder strewn gravel bars. The ares of backed up water though left behind thick silt layers. With water from the Columbia Basin Project, the Quincy Basin has been transformed into an expanse of very productive farmland.
Posted by Dan McShane at 11:11 AM 3 comments:

I only took two pictures (other than my travel mates watching the sun with our glasses prior to totality). With only two minutes I simply wanted to take it in as much as possible - and leave the picture taking to those with better skills, experience and equipment.

We were very near the center path with a view of the Oregon Cascades volcanoes to the east. Mount Jefferson, a 10,000-footer was in the totality path. I snapped a picture of it when it fell into the full shadow of the moon, but the full shadow had not reached us. 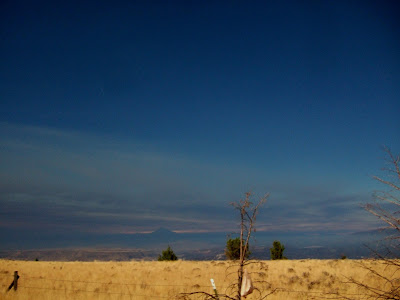 After the shadow arrival I took in being able to stare directly at the sun and see a black space surrounded by the white glow of the corona. Seeing live the solar flairs rising above the surface of the sun. Planets close to the sun briefly visible and stars that are always there in the middle of the day briefly revealed. During the total eclipse I took one picture of Mount Hood, another Cascade volcano. Hood was not in the path of totality. We could also see the Sisters, a group of volcanoes to the south outside the totality path. 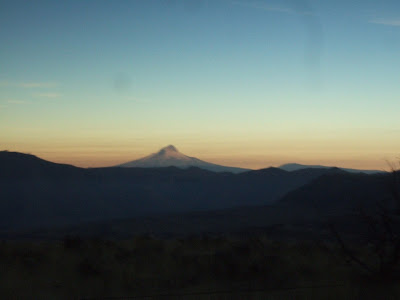 A wondrous experience to be briefly touched by the moon's shadow. Well worth the modest effort to get to totality.

Dr. Hungr has influenced how landslides and debris flows are assessed and influenced policy approaches regarding landslide and debris hazards. That influence has been particularly true in his home of British Columbia and because of the proximity of his work at least in part Washington State. His background as a consultant and professor and his willingness to work in the public sphere has been an inspiration.

For me personally his published work is very much part of my own library of frequently referenced and repeatedly read papers.

Dr. Petley referenced his exchanges with Dr. Hungr regarding the Oso landslide. I became very familiar with Dr. Hungr's take on the Oso slide and found that his analysis of the slide was very similar to my own. Of course it was because as noted above his published work has become very much incorporated into my own approach to assessing landslide and debris flow hazards.

For geologists and engineers that work in the field of landslide hazards and alluvial fan hazards, he will continue to have a long lasting influence.

May we carry on his work.
Posted by Dan McShane at 9:02 AM No comments:

Stratum Group added a geologist for our geology hazard work. Geoff Malick brings some new skill sets and perspectives to Stratum Group. His graduate work was on a large bedrock landslide complex in northwest Washington. Geoff has accompanied me on numerous ventures this summer as well as his own solo ventures. 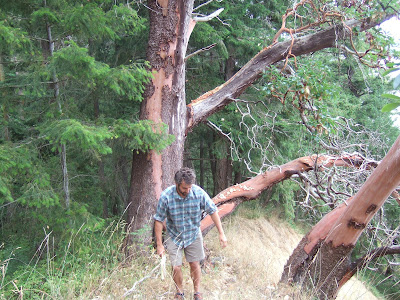 Traversing the head of an old slide above Port Discovery 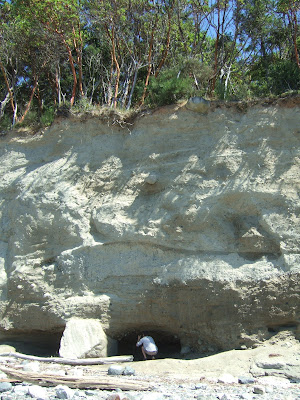 Examining an undercut glacial till bluff at Foulweather Bluff 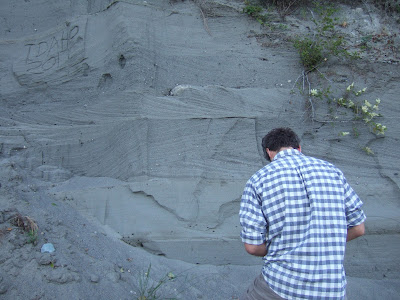 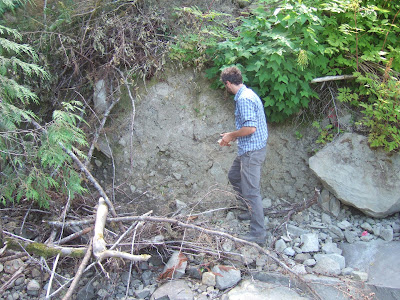 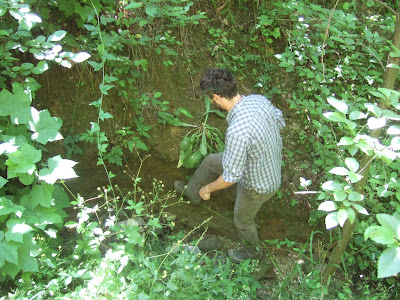 In a narrow incised channel on an alluvial fan 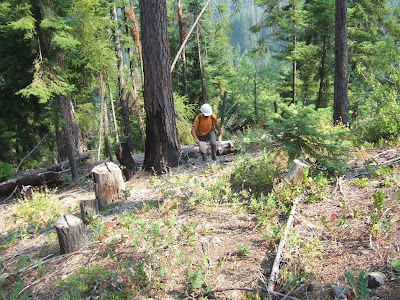 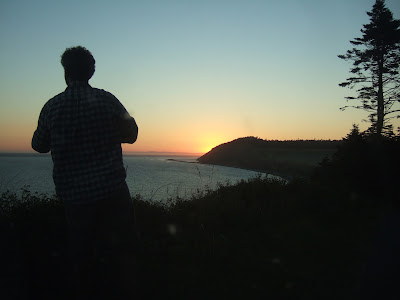 Taking in a nice view after a long field day

The scene pictured below is very unusual, but does require some explanation. 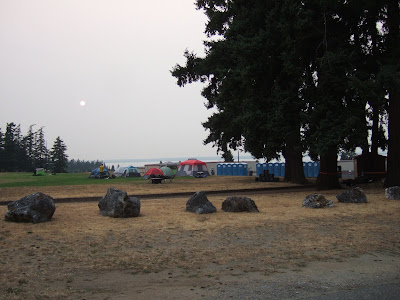 The cluster of tents and portable toilets is to support a fire fighting crew based at Fairhaven Middle School in Bellingham. The firefighters were deployed to fight a forest fire on Chuckanut Mountain south of Bellingham. This forest fir was taken very seriously with helicopter water dumps from lake Samish.

The light in the image is the sun. A week of dim light and poor air quality throughout much of Washington State.

Posted by Dan McShane at 7:24 AM No comments:

A modest detour allowed a bit of memory revival along a former familiar road and landscape. 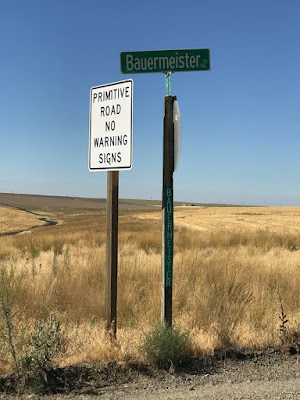 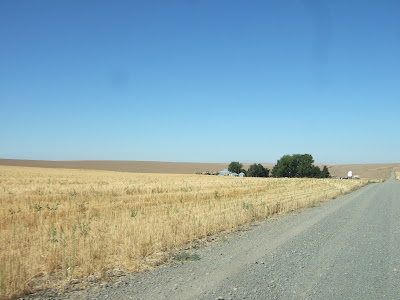 Dale and Dan Bauermeister were active participants in trials of wheat strains put on by Washington State University. One hard red wheat variety tested on their farm was named for the farm (Red/Bauermeister.pdf).

That variety along with other wheat varieties is changing how wheat is being grown and turned into food (https://www.nytimes.com/2015/11/01/magazine/bread-is-broken). Wheat fields in Skagit County are growing Bauermeister wheat and the resulting flour and bread is bringing about a change in bread (new-wave-wheat). New local wheat varietals and baking can be likened to the early days of craft local beers.

From the New York Times article "A couple did not have much flavor or structure, but one of them in particular, Bauermeister, knocked my socks off."
Posted by Dan McShane at 4:07 PM 1 comment: