Debris flows on alluvial fans are a geologic hazard that can be of considerable consequence. This debris flow spilled large logs above the incised stream channel several years ago. I used my cell phone to record a few observations.

Posted by Dan McShane at 9:57 PM No comments:

Adiabatic Heating and The Bear Who Stole the Chinook

A few messages suggested a bit more background on Snow Eater Wind would be useful. If there is a barometric pressure gradient across the mountains air will flow over the mountains and then descend down the other side. The air is a gas and will follow what is termed the Ideal gas law.  The simple equation is PV = NRT, where P = pressure, V = volume, N = amount of gas (moles), R = gas constant (a number value with an interesting history) and T = Temperature. Hence, if the pressure of the air is increased air will become warmer and if pressure decreases the air will become cooler; other aspects of the equation remaining equal and the gas behaves ideally. Of course there is more to this and that is why we have meteorologists.

The strong east winds that reached Bellingham and Skagit County as well as the lower west slopes of the Cascade Range to the south were the result of a high pressure mound of air east of the Cascades with a low pressure off the coast of Washington. The high pressure air flowed towards the low pressure and as it descended it warmed at the dry adiabatic lapse rate. Even if the original air mass pulled over the mountains may have been cold, the increase pressure would cause it to warm substantially. The roughly 7,000-foot drop over the North Cascades Range would produce a warming of the descending air mass of 38.5 degrees F. So an air mass of say 10 degrees F would warm to 48 degrees F, about the temperature spike Bellingham had for a few hours last Wednesday evening.

Technically this is not a Chinook wind per meteorology, but the results are very similar and I would note the term Chinook wind is used more broadly by some and I do not know if the type of wind that descends east from the Cascades has been given a name.

Billy and I experienced our share of Chinook winds and he alerted me to this song by Jack Gladstone, a Blackfoot and former U of W Husky.

Down slope winds off of mountain ranges can have a pronounced impact on temperature. Long cold spells in central and eastern Washington will come to abrupt ends when storm systems from the west are strong enough to push across the Cascade Range. The descending air will scour out the pool of cold air but also the descending air warms rapidly causing a sharp jump in temperature. The wind is locally called a Chinook and the term is used widely in the interior northwest U.S. out to Montana and the plains of Alberta.

A similar phenomena took place last night in the lowlands of western Washington - only the wind direction was reversed. A low pressure off the coast to the west created a sharp pressure gradient from east to west across the Cascade Range. The result was a sharp temperature increase from the descending air.

A similar effect took place in the Skagit lowlands that I experienced first hand. I had to venture out to pick up Lisa at the train station in Mount Vernon. The wind was very hard from the east; high enough to cause some slipping on the icy roads as the car was pushed about, and formed numerous speed bumps of snow drifts. But on the return the temperature jumped from the low 30s to the mid 50s in less than 5 minutes.

The Blackfeet Indians called these events snow eaters. Indeed much of the snow was eaten away down from its deep layer by the warmish and dry wind before the temperature lowered to the 30s and the slow wet melt that has persisted all day.

Posted by Dan McShane at 1:58 PM No comments:

A snow shower band stayed in place over a swath of northwest Washington last evening leading to a snow day. Mid day I took a walk-about on the east end of Samish Island. 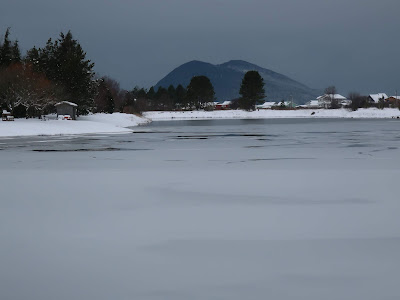 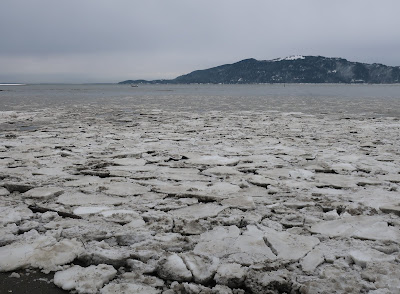 Chuckanut Mountain to the northeast with Samish Bay in the foreground 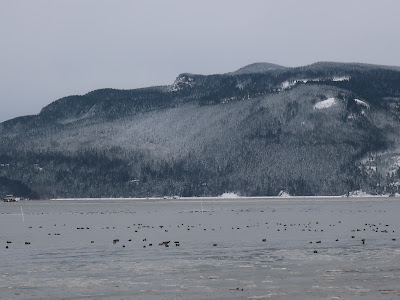 Blanchard Mountain with Samish Bay in the foreground 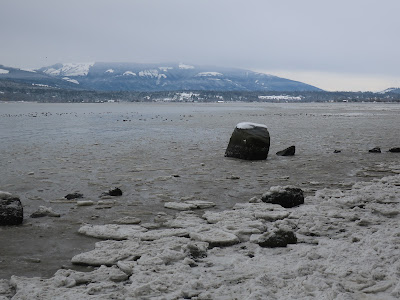 Lyman Hill to the southeast

Lyman Hill is 2,000 feet higher than the highest point on Chuckanut Mountain. Perhaps it seems hill like as to the main portions of the North Cascade Range is further to the east behind the "hill". 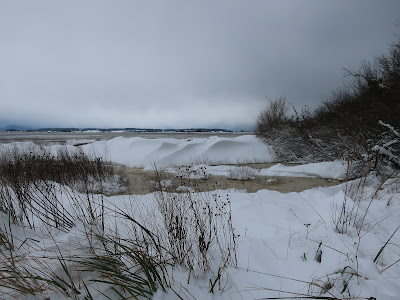 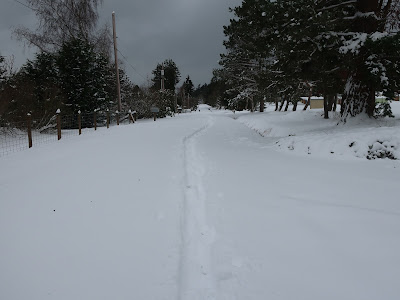 The road towards home. 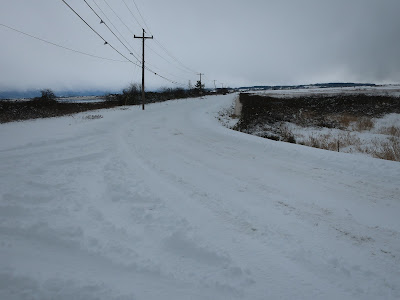 Samish Island is an island that can be driven to. The island was separated from the mainland by tide flats prior to dikes being built to create farm land. 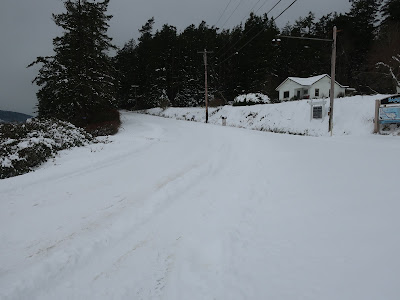 The road heading up onto the island

It was sort of a black and white day - mot much color with the snow and overcast. One bright spot was this Ixoreus naevius (varied thrush) on a small native cherry in the forest. 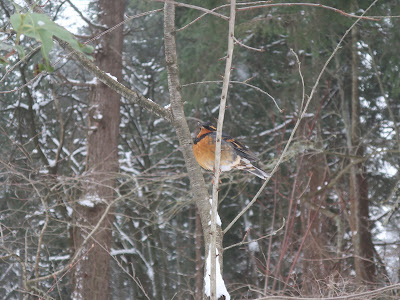 Posted by Dan McShane at 6:59 PM No comments:

A field venture a few days before the current cold spell took me through a wetlands restoration project, past thickets of Nootka rose, and an effort to push back on invasive canary reed grass. 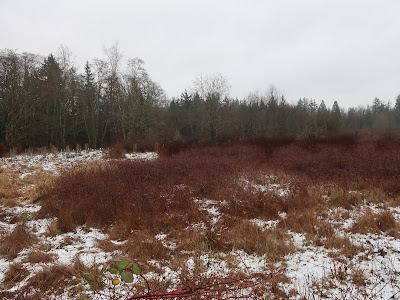 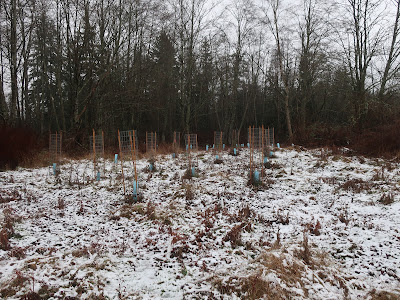 One challenge of environment restoration plantings is keeping the rodent and deep nibblers at bay; hence, the blue plastic tubes and fencing around plantings. 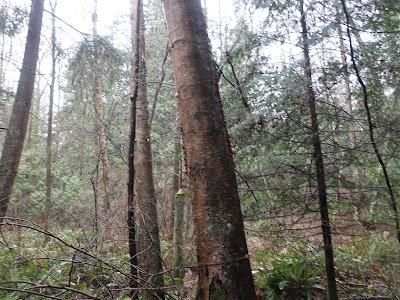 The forest stand I passed through was a very mixed stand. This tree is a tree that has a limited range in Washington State, but is a common tree in the northwest Puget lowlands. 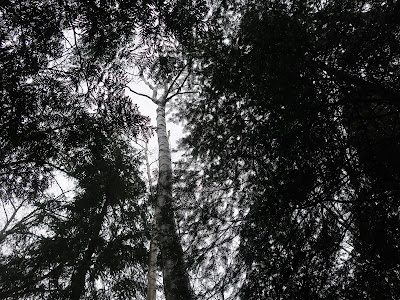 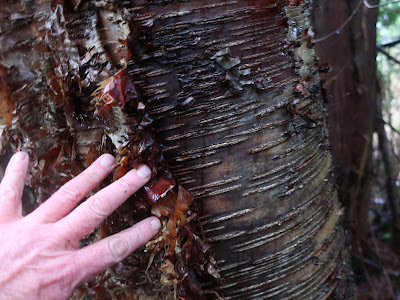 The bark pattern of this species in northwest Washington is often dark and can be mixed up with wild cherry, another local native tree. However, some do develop the more classic white bark. There is some variability in the species that early fur trappers noted - west of the Rocky Mountains the birch do not have the same quality of bark for the building of canoes, a bit of a disappointment for the river and lake traveling that fur traders relied on. 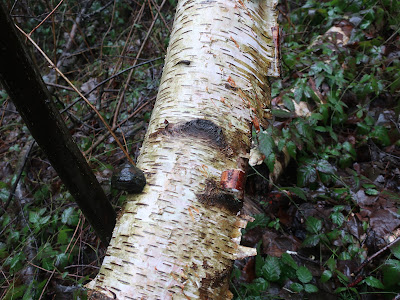 In Washington State, Betula papyrifera is limited to the northern reaches of the Puget lowlands in western Washington and far northern and eastern edges of the state. 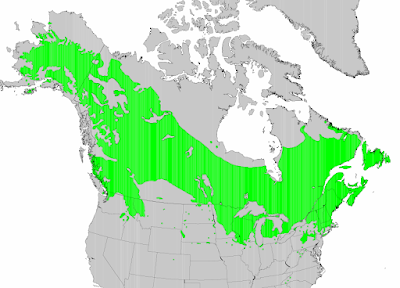 The distribution of the species limiting factor is likely strongly associated with Argilus anius (bronze birch borer). Muilenburg and Herms (2012) provide an overview of the relationship of the borer and birch trees. Temperature plays a partial role. Deep freezes may slow the maturation of the borer.

In northwest Washington, the paper birch is limited mostly to norther Puget lowlands. In the Birch Bay and Drayton Harbor area, the tree is one of the predominant species in the forest. These areas are cooler in the summer and perhaps the occasional bast of arctic air out the Fraser River canyon like today puts a bit of a check on the borer. Today, was a good example. While snow arrived in the Seattle area, the temperature in Seattle as I write this is 30 F, while the temperature at Birch Bay is 15 F. In addition, the northwest portion of the state is substantially cooler in the summer and thus a bit less stress for these cool weather wet ground trees.