Wasting Gas for a Short Term Gain in the Bakken

What follows are some observations I made in the Bakken Oil Field this summer that I was reminded of in a recent New York Times article. I finish with an opinion regarding a possible policy position that North Dakota perhaps should consider given the lack of Federal policy on the matter of wasting a natural resource. 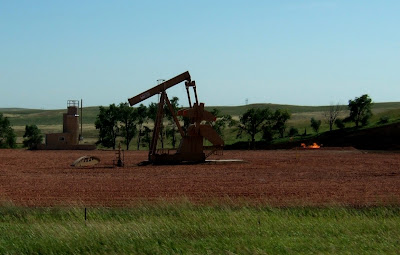 Bakken Formation oil well and gas flare to the right, North Dakota
As noted previously HERE the Bakken Formation oil boom has overwhelmed the capacity for moving oil from the oil field development. The huge surge of workers has also overwhelmed the communities. Several friends asked me what was going on in North Dakota because they had trouble finding motel rooms in the area during cross country trips. What is going on is drilling, hydrofracturing, well development and oil production and all the infrastructure that goes with it.
This oil boom has also outpaced infrastructure to move associated natural gas from the oil fields to markets. The market demand for oil is so great that natural gas is being flared throughout the Bakken fields as can be seen by the small well flare above. The New York Times recently reported on the gas flaring north-dakota-wasted-natural-gas.

The CO2 emissions for producing oil in the Bakken Formation should be much lower, but by simply flaring the natural gas, the production CO2 emissions are much higher than otherwise. Besides the CO2 emissions, this is a wasteful policy. Except that it is not a policy because the United States has no policy when it comes to burning off well field gasses. The lack of policy has more to do with the rarity of flaring in the United States.

A long view energy policy would be a means of reducing such waste and have the side benefit of saving natural gas and electric energy rate payers money. But how to set such a policy? North Dakota perhaps should think of adding a tax to all natural gas generation regardless of whether it is sold or not. At the federal level, perhaps a more rapid permitting process for the needed pipelines and possibly electric power plants. Coal fired electric power plants are already located not far from the Brakken fields. Perhaps some incentives to co-locate natural gas fired power plants. Activists opposed to tar sand oil pipelines may advocate for pipelines to serve this lower CO2 oil and gas field.
Posted by Dan McShane at 8:16 AM