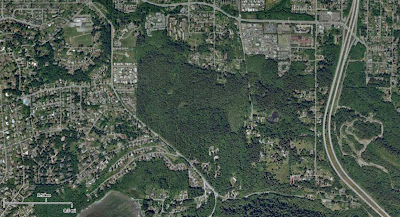 Chuckanut Ridge - much of the tree covered area in the central portion of picture
Chuckanut Ridge is the name of a chunk of land in the south part of Bellingham that has generated a fair bit of local interest on and off over the last 20 years. The property has at various times been proposed as an area for development by the property owners. The property is a block of second growth forest within the south part of Bellingham. The fact that it is essentially surrounded by development and abuts neighborhoods and has a public trail and other parks along portions of its margins has endeared this piece of land to local Bellingham south side residences. It has also made the property appealing for development. Development of the site had some significant challenges, most notable being the lack of access for the traffic the site would generate.

The value of the land plummeted when the national real estate market collapsed and the site no longer was a short term project. This property along with numerous other residential development loans in western Washington played a role in the failure of a local community bank. Washington Federal Bank acquired the property and very recently agreed to sell the property to the City of Bellingham for $8.2 million. The purchase price requires the City to to loan the required money from one fund to another, but the exact manner in which this loan will be paid off has not yet been determined - it is being worked on. For Bellingham, this is no small loan between funds and will likely generate a fair bit of discussion and disagreement. The loan itself may cause a delay in other park improvement projects as the money would be tied up in the purchase. There is an idea that has been floated of selling a portion of the Chuckanut Ridge property to pay off the loan.

All that aside, the LIDAR image of the area shows that the name given the site is fitting as a ridge of resistant Chuckanut Formation sandstone forms a ridge across the northern portion of the site. 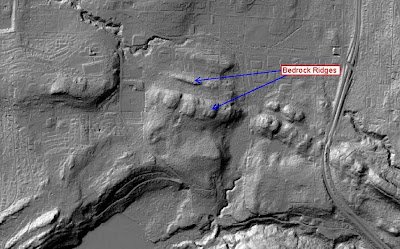 LIDAR of Chuckanut Ridge
The ridges are located on the northeast side of a northwest plunging anticline. The other limb of the anticline can be seen in the lower left of the image.
Posted by Dan McShane at 6:03 PM