Powder River coal has been very much in the news in Washington State with proposed coal shipping terminals at Cherry Point in northwest Washington and at Longview, Washington on the Columbia River in southwest Washington. Another site has been floated for shipping out of Grays Harbor. The Powder River Basin is an active coal mining area on the high plains of Montana and Wyoming. Development of rail spurs in the basin to main transcontinental rail lines to the north and south now allow transport of the coal to markets to the south and east and more recently to the Pacific coast for overseas shipping to China. Currently Powder River Basin coal is being shipped to a coal terminal on the southwest coast of British Columbia just north of the U.S.-Canada border. Coal from the Powder River Basin also supplies electric power plants in Texas and Colorado..

The Powder River Basin is one of several northern plains geologic basins that preserve coal beds from a time when what is now the high plains was covered by shallow seas and broad warm coastal plains. The initial basin formation formed significant oil and gas deposits and later basin development in the same basins by down warping roughly 50 million years ago formed extensive coal deposits. The broad geologic basins that formed these deposits do not necessarily correlate with existing drainage basins. For example, when a geologist says the Powder River Basin, the geologist is referring to the geologic basin that allowed the formation of the extensive coal beds. The geologic Powder River Basin is much larger than the current Powder River watershed basin.

The formation that contains the coal beds in the Powder River Basin, the Fort Union Formation, extends into other geologic basins including the Williston Basin in the Dakotas, Montana and Saskatchewan. When the Lewis and Clark Expedition made their way up the Missouri River and into what is now termed the Williston Basin (geologic basin) they noted coal was present on the bluffs of the Missouri River in present day western North Dakota. Early settlers utilized the deposit as a fuel for heating and mined the deposit along the bluffs at near present day Pick City located along the Missouri River. 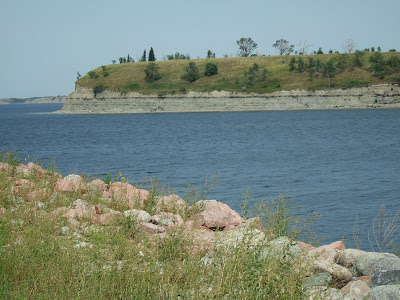 Coal seam along bluff above the Missouri River Sakawea Reservoir above Garrison Dam
I recently visited the Williston Basin. To the east and west of the coal seam pictured above there are a number of thicker coal seams and these seams are mined on both sides of the river using strip mining techniques. Overburden of rock and soil is removed and the coal is then mined using huge drag lines. The over burden of non coal rocks and soil is not very thick in this area. The shallow coal in the Williston Basin is lignite. It is within the same formation, the Fort Union Formation, as the coal in the Powder River Basin, but is higher in the formation than the units mined in the Powder River Basin. The coal seams in the upper Fort Union Formation are lignite and contain about 25% less energy than the Powder River Basin coals. Lignite has low energy content and is typically used very near the mine as it is not efficient to transport low energy fuel. In the case of the western North Dakota coal mines, the coal is utilized in electric power plants very near the mines. 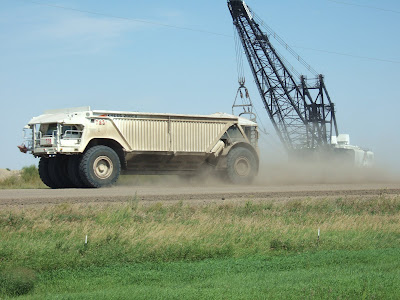 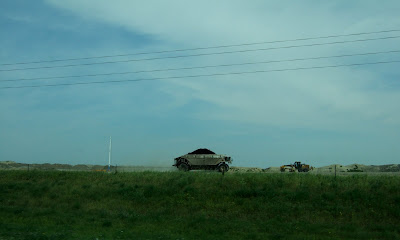 Coal on the way to power plant 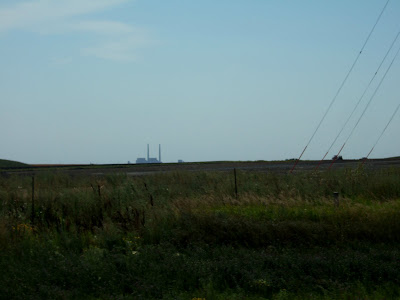 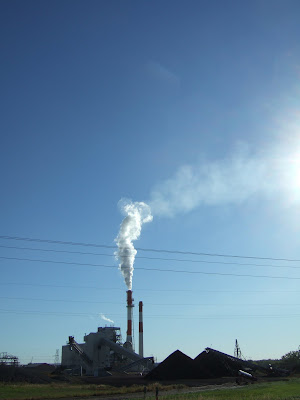 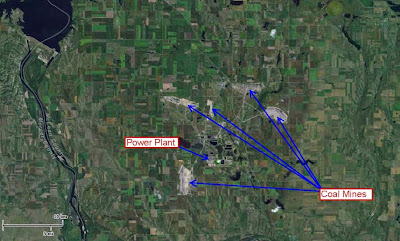 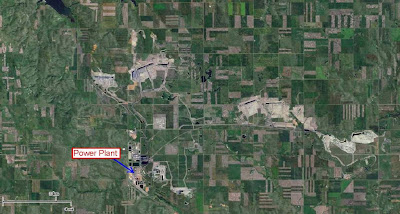 Coteau Mines and power plant west and south of Missouri River, North Dakota
The Fort Union Formation in the Powder River Basin is subbituminous coal. Still not particularly high energy content, but high enough that at least at present the energy costs of transport are low enough that Fort Union Formation coal from the Powder River will make money for mining companies, railroads and electric generators. Some of the coal seams in the Powder River Basin are greater than 100 feet thick. Hence, for seams relatively near the surface, mining can be be a very efficient operation.
Although the Fort Union Formation in both the Powder River and Williston Basins has relatively low energy content, the sulphur content is low compared to many other coal formations. The low sulphur content makes up for the low energy content as energy loss for sulphur scrubbing and power plant costs are reduced. The Powder River Basin coal has just enough energy content combined with the low sulphur content to make it worth mining, transporting long distance and burning for power at least at current energy prices. Such is not the case with the even lower energy content coal in the Williston Basin. Shipping the Williston Coal is very unlikely, but then the same once was true of Powder River low energy coal. The coals of the Powder River and Williston basin are considered clean coal, but still emit just as much carbon dioxide when burned as higher sulphur coals.
The combination of low sulphur, thick coal seams, and new rail spurs in part aided by government funding and allowance for railroads to easily condemn private land in Montana has led to recent rail impacts in Washington State and the potential for a new large export facility on the Washington coast. Coal politics has arrived in Washington State. coal-terminals-in-washington-state, coal-terminal-preemptive-strike, cherry-point-coal-terminal-updatel, coal-politics-comes-to-washington
Posted by Dan McShane at 12:17 PM