Not exactly a Washington State landscape, but after lots of time on the northern plains I do have a few observations to note.
Substantial flooding has impacted North Dakota this year as well as over the past few years. The Missouri River, Red River and Souris River have all flooded this year. Floods last a long time on these slow moving rivers. At Sioux City, Iowa on the Missouri River flooding was still taking place a month after the area initially flooded. At Garrison Dam in North Dakota, the Army Corp of Engineers opened the spill way gates for the first time since the dam was completed in the 1950s.
By the time I arrived at the Garrison Dan the spillway had been closed but the flow of water through the hydroelectric power plant at the dam was still very high. 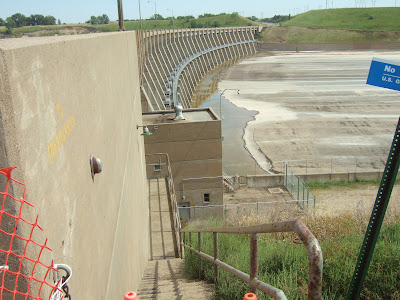 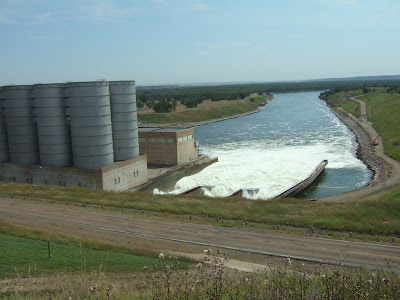 Outfall at the hydroelectric power plant on Garrison Dam on the Missouri River, North Dakota
More than rivers are flooding in North Dakota. Many areas of North Dakota have closed basin lakes formed during the last glacial period. Devil's Lake has been rising for several years slowly flooding homes and farm land and has only been checked with the construction of a very costly drainage project. Of note is that Devil's Lake was previously higher and appears to be returning to previous levels after several years of wetter weather.
Numerous smaller lakes have been expanding as well causing flooding of roads and highways that traverse across these shallow lakes. The road grades across several lakes has required fill to elevate the road way. 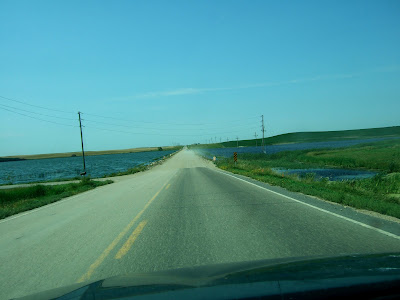 Approach to lake crossing on Highway 200 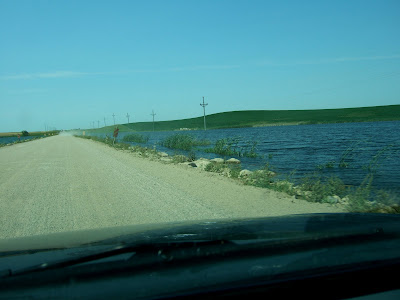 Lake waters lapping up to edge of road. The road level was raised above the water level with gravel fill.
Posted by Dan McShane at 7:47 AM