Besides coal mining in the Williston Basin powder-river-basin-and-williston-basin-coal there has been a significant oil and gas boom in the basin. The oil and gas boom is exceeding the capacity of the transportation system with some proven oil fields sitting idle due to lack of pipe line and rail capacity to ship the oil. The small towns of western North Dakota are being over run with truckers, drillers and geologists. 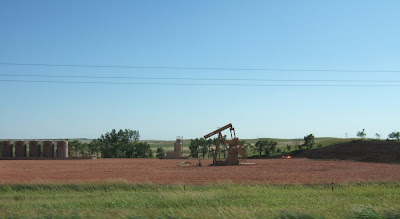 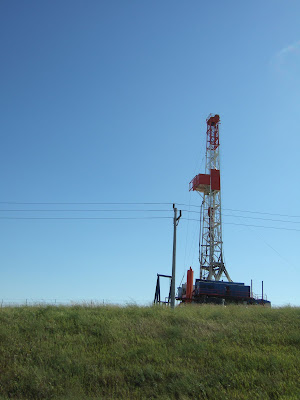 Drill rig in western North Dakota
The exploration and drilling programs are tapping into the Bakken Formation at the base of the Mississippian within a much deeper and older part of the Williston Basin than the Fort Union Formation coal seams. In western North Dakota and eastern Montana as well as to the north in Saskatchewan the formation is deep enough to have been cooked just right to produce oil. Oil has been known to be present in the Bakken since the 1950s but drilling technical advances as well as fracturing advances have turned this patch of North America into an oil boom that keeps getting bigger with pronounced oil and gas reserves growing every few months.