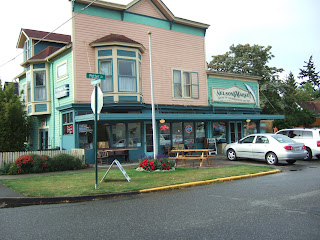 Nelson's Market in Bellingham's York Neighborhood
This is very local and certainly is political. But for my local readers a great chance to meet Kelli Linville. Kelli is running for mayor of Bellingham, and a few Yorkers are hosting an event at Nelson's Market to meet Kelli.
YOU’RE INVITED!!!
Please bring your friends and join
Kelli Linville for a lively conversation
about Bellingham’s future.
Monday, September 26, 2011
5:00 – 6:30 p.m.
Nelson’s Market - 514 Potter Street
Hosted by: Anne Mackie and Jon Ostby
John and Emily Diaz Flynn
Lisa and Dan McShane


There is a funny twist to this event. Her opponent, the current mayor, showed up at Nelson's Market in July to film a TV add. The city administration had opposed neighborhood plan changes in the York neighborhood. This issue was dear to the owners of Nelson's as well as a number of community members that worked hard to craft a sound neighborhood plan without city support. Hence, the Nelson's folks were not pleased that the mayor wanted to use their store and cafe in an advertisement without asking.

Nelson's Market is a symbol of what is great about urban living, but its success and the way the neighborhood has evolved into a very livable urban community has nothing to do with current or recent city leaders. The very things that make the York Neighborhood such a great urban community were threatened with very poorly thought through zoning developed in the 1970s that would have allowed multi-story apartment buildings and commercial businesses throughout much of the neighborhood. The current city administration opposed changes to zoning rules that posed that threat. Hence, the opposition to the mayor using the York Neighborhood as a symbol of success.

There are other reasons for my support for Kelli. I have had many positive interactions with her when she was in the state legislature. But come if you can to find out for yourself.
Posted by Dan McShane at 4:18 PM