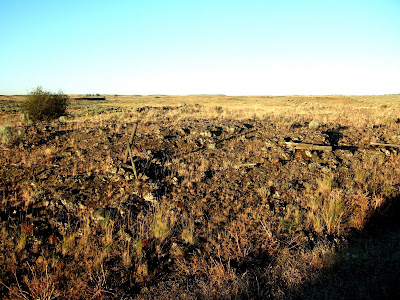 Telford Scabland, a tough place for driving fence posts.
Large tracts of Washington’s landscape were shaped by the Missoula Floods. One prominent feature found along the flood route is scabland topography. Scablands are areas where all of the soil was stripped from the bedrock and the bedrock was ripped up leaving a scabland landscape. With most of the bedrock consisting of dark basalt lava rock the term scabland is very apt.

The Telford scabland is crossed by US Highway 2 between Creston and Davenport west of Spokane. It is easy to be locked into driving the straight stretches of highway heading east towards Spokane or west from Spokane and not fully appreciate this landscape unless you’re versed in the Missoula Floods. The surge of water from the rapidly draining Lake Missoula flowed into Washington State and Glacial Lake Columbia. Glacial Lake Columbia overflowed at multiple locations including a broad swath north of the Telford scabland. 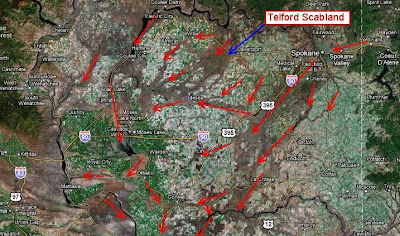 Telford Scabland
The scabland is mostly brown with rectangular fields on
the elevated areas where the flood waters did not pass.
Note the large number of lakes within the scabland area.
Not all of the local bedrock is basalt. If you are alert or not driving in the dark, you might notice an outcrop of much older granitic rocks east of the town of Creston. These rocks are part of the Lincoln Metamorphic Core Complex, one of a series of metamorphic core complexes that are located across the northern tier of Washington State. A little side trip to take in the view from Creston Butte a mile south of Creston is to take a trip back into deep geology time as the butte is underlain by possible Precambrian quartzite. The Columbia River Basalts are thinner here and the much older rocks that dominate the metamorphic complexes of the Okanogan Highlands and mountains north of the Columbia River crop out on through the basalt in a few places on this high plateau.

Though rocky scabland, this area is not a desert. The area is full of lakes and in areas where soils are thicker there are stands of ponderosa pine and thickets of brush. The ponderosa pine forest can be seen along stretches of Highway 2 and occasionally a small lake can be glimpsed from the highway. The elevation of the area traversed by Highway 2 is just below 2,500 feet hence the somewhat wetter conditions. The Telford scabland becomes drier to the southwest as elevation lessens. 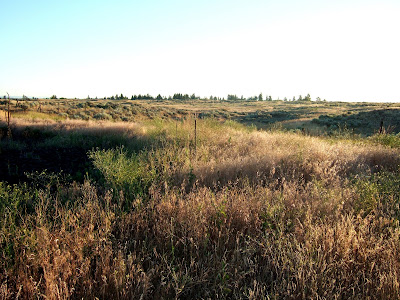 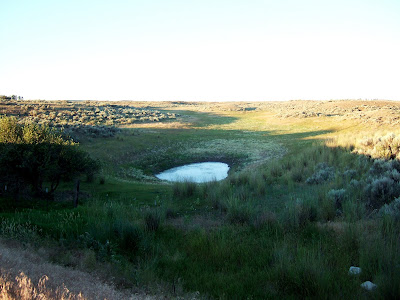 Kolk or pothole pond in scabland
Although not pristine, the area has been used for grazing for many years, this part of Washington is a big area of wild land. Significant blocks of this area are within public ownership. Bureau of Land Management (BLM) owns an approximately 30 square miles of contiguous land southwest of Highway 2. I believe this may be the largest contiguous BLM block land in Washington State. The BLM owns an additional approximately 8 square miles adjacent to Highway 2 and approximately 20 square miles west and northwest of Odessa. In addition the 21,000-acre Swanson Lakes Wildlife Area managed by Washington State Fish and Wildlife abuts the BLM land. The area also contains roughly 18 square miles of Federally granted trust lands granted to Washington State in 1889 some of which abut the Swanson Lakes Wildlife Area and the BLM land.

The Swanson Lakes Wildlife Area is the result of wildlife mitigation by the Bonneville Power Administration for Lake Roosevelt wildlife loss due to Grande Coulee Dam. The lands were acquired in the mid 1990s. Washington Fish and Wildlife has been introducing both Columbia sharp tailed grouse and sage grouse to the wildlife area. These birds had been extirpated from the area by the late 1980s.

Despite the term scabland, this is land has great fishing, hunting and just solitude with wide views. I spent a nearly full moon night on the BLM land a few miles south of the highway last summer. Woke in the early light to coyotes calling out to each other, brewed a pot of coffee and headed to Spokane feeling very refreshed.

The scabland area is surrounded by soft rolling hills of eolian silt covered with wheat fields on the high ground untouched by the great floods. A few peaks rising above the wind deposited sediment are ancient rocks of the metamorphic core complexes and Precambrian rocks of the ancient continental margin. 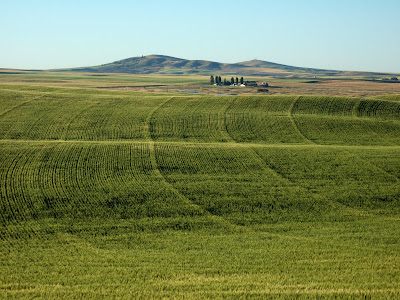 Wheat on eolian silts with buttes of Precambrian rocks in the distance
Posted by Dan McShane at 4:59 PM

I had assumed that all the scablands were underlain by basalt, so it's really neat to find out that part of a metamorphic core complex is underneath in one area. And maybe I've even driven through there, though not sure.