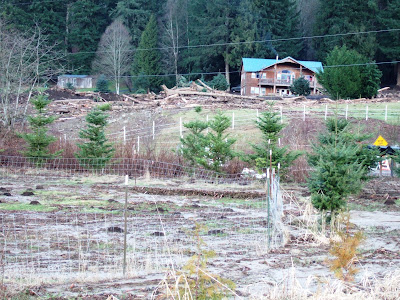 Debris flows and homes, South Fork Nooksak River Valley, January 2009
I am working on reports as well as doing some research on the land use policy and Mars comparisons on the Telford Scablands west of Spokane. In the meantime I came across a couple of geology and policy articles. As some readers of this blog know I spent some time in the public policy arena and geology came up more often than I ever thought it would. My all time favorite quote as an elected official was after telling fellow Council members that it was not moral to vote for a project until they actually went up and looked at a landslide, I stated "It is slicker than snot." Not a technical geologic term, but descriptive of the conditions above Canyon Creek in the Northwest Cascades where a large slope failure within a ultramafite lined fault posed a threat to a housing development on the alluvial fan below.

The first article is from the New York Times regarding construction of barrier islands off the coast of Louisiana. I'll leave it to the reader to assess if this is a good use of money. Article HERE

The second article is about earthquake drills in California. I kind of liked this because I once lived in Alamo. Article HERE

Finally a local Whatcom County blog that covers politics had a clip of a radio debate between two county council candidates when Swift Creek came up HERE   I have posted a few times on Swift Creek and will do some more in the future. Swift Creek posts are Whatcom County's Desert and Floods and Urban Landscapes 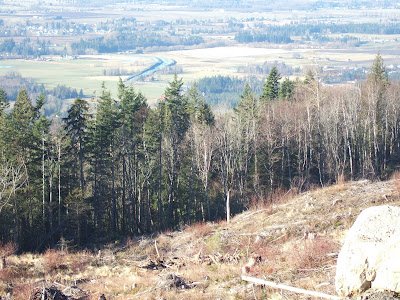 View of Swift Creek from the slope of Sumas Mountain. Dredged sediment can be seen lining the creek banks as it flows across the low lands towards the Sumas River.
Posted by Dan McShane at 8:22 AM