Across the Columbia Crest from Prosser (Part I)

A drive south up over the Horse Heaven Hills south of Prosser on State Highway 221 provides great views of the Yakima Valley, a short cut for those driving on Interstate 82 towards Oregon, and a direct route from the Yakima Valley, Rattlesnake Hills, Red Mountain and Snipes Mountain Viticultural Areas to the Horse Heaven Hills Viticultural Area. Just below the crest of the steep north facing anticline is an outstanding geology exposure (a future post) in the road cut as well as a great view. There is also a nice pull out just beyond the road cut if your heading south or just before the cut if your heading north. 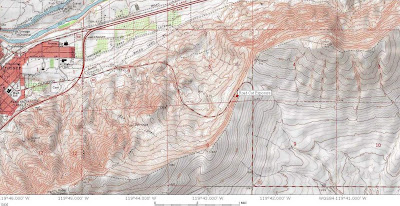 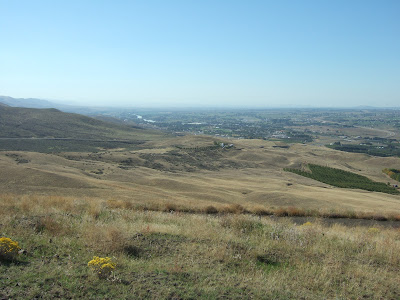 View from the crest of the ridge towards Prosser and the Yakima Valley
The lumpy area in the foreground is a old landslide feature.
Old landslides are a common feature along the steep north facing slopes of this ridge. There are several reasons: 1) the slope is steep often over 45 degrees, 2) The north steep side of the anticlines on the Yakima fold belt are tightly folded and fractured with some minor faulting thus creating lots of fractured broken rock blocks, 3) Basalt is the predominant rock type and vertical columnar jointing provides weak plains in the rock and allows water to readily infiltrate, 4) sedimentary units between some of the basalt flows are clay rich and some of the more fractured basalt has altered to clay, and 5) the lower portion of the slope was rapidly eroded during the Missoula Floods - flood waters reached an elevation of approximately 1,250 feet well up the sides of the lower slopes.
The highway curves around this old landslide feature and cuts across the steep slope just above the slide area. Other possible slide areas are easily observed along Interstate 82 below the slope or from above by continuing along a gravel road along the crest of the ridge or by a tour of Google earth. I suspect that most of the lumpy topography is the result of old landslides; however, secondary folds, faults and aseismic deformation features are present in these areas as well (Reidel and Fecht, 1994 and Reidel, Campbell, Fecht and Lindsey, 1994) and some of the lumpiness may be a combination of these features along with slide areas. 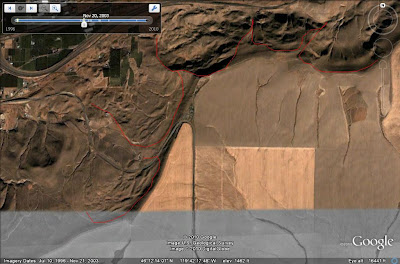 Lumpy areas outlined in red are potential old landslide areas.
Posted by Dan McShane at 10:33 AM