A few notes on Fall Color

I did get a few fall color treats while travelling across Wyoming and northern Colorado as well as seeing this patch of aspen in northern Utah.

Aspen in northern Wasatch Range
A great fall show in the low land forest of western Washington is partially limited due to the trees we have. Of course the conifers don't provide any color, but we do have plenty of deciduous trees. However, most perform poorly on the fall color front. Red alders seem to drop their leaves even before the leaves yellow. The cottonwoods are not much better. Low land aspens and paper bark birch found north of Everett particularly around Whatcom County's aptly named Birch Bay behave a lot like the alders.

The one tree that has the best potential for putting on a great show is the big leaf maple. The big leaf maple is common and and in some areas is the dominant stand of mature trees. This is particularly true on portions of the northeast Olympic Peninsula. I would describe the big leaf's fall show ability as a bit sensitive. The leaves turn brilliant yellow but are easily knocked off by storms. Hence a long sunny spell with no wind like this past week are helpful. Perhaps I will be surprised next week when I head over to the Olympic Range and foot hills. Last year and the year before the weather not only in the fall by the summer led to great colors and the big leaf maples even developed some red tones. 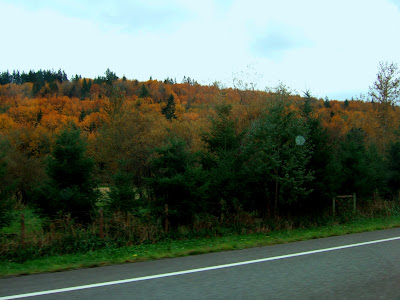 Stand of big leaf maples behind farm on recessional morainal area along Highway 101
A few other trees put on a good show as well. Wild cherry has great color under the right conditions and happens to more common on the northeast side of the Olympic Peninsula. Vine maple almost always does a good show, but it is low growing tree and typically most of its color show is in August well before the other trees.

For consistent great color the high alpine meadows of the North Casades with vast fields of wild blue berry and mountain ash are a guarantee good show, but it is a little late for that show. In the more easterly North Cascades mountain larch are present in the high meadows growing at the extreme edge of the tree line in one of the few areas we have a true tree line. Larch are a conifer that looses its needles and turns gold in September. Further to the east in the high mountains of north central Washington, western larch is a dominant species particularly in the Kettle Range. I have always wanted to make the drive over Sherman Pass or Boulder Pass across the Kettles between Republic and the Columbia River during the western larch showing. I have never timed it right though.

A final Washington State trivia note: Sherman and Boulder Passes over the Kettle Range are the highest paved passes in Washington State.
Posted by Dan McShane at 10:45 AM