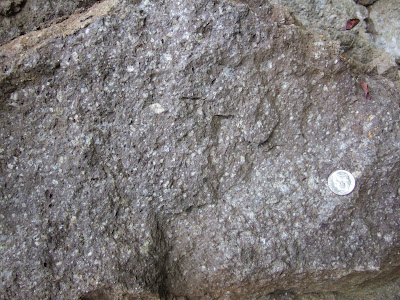 Adakite at Tamanowas Rock
Adakite is stretching my knowledge of volcanic rocks. Magmatists like using more than three names for lava and have moved well beyond the simple basalt-andesite-rhyolite terminology those less versed in lava use. Magmatists are like Eskimos talking about snow when it comes to magma.

David Tucker sent me an abstract by Hahn and others (2004) regarding adakite at Chimacum Rock. Before I proceed I will note that I will call Chimacum Rock Tamanowas Rock for the rest of the post. Tamanowas Rock is located just west of Chimacum on the ridge between Chimacum and Anderson Lake. Tamanowas Rock is a sacred place to the S’Klallam Tribe. Out of respect, please refrain from hammering chunks of rock off of the formation. The property is open to the public, but ownership requests a "leave no trace" ethos.

I was vaguely aware that Tamanowas Rock was not the more typical basalt one sees on the Olympic Peninsula as part of the Eocene Crescent Formation. I had even stumble across some unmapped notably non basalt outcrops on the forested slopes above the southeast end of Discovery Bay. Schasse and Slaughter (2005) and Whetten and others (1988) both indicate on their maps the presence of dacites and associated sediments near the southeast part of Discovery Bay and link those rocks as being the same as that at Tamanowas Rock area. The nuances of lava were not my primary concern as I was mostly focused on some tricky slope stability problems in the area.

I had never stopped to gander at the bedrock exposed along the Anderson Lake Road south of Tamanowas Rock or ventured to Tamanowas Rock itself, a cliff rising up out of the forest west of the town of Chimacum. So earlier this week, I took a little non work geology field trip to take a look.

Site can be accessed via trials out of Anderson Lake State Park
or at the close road indicated on the Google image
Analytical work by Hahn and others (2004) (See Here) indicate that the Tamanowas Rock has adakite like traits and point out that the presence of adakite at Tamanowas Rock may be used to have a better understanding of how the ocean plates off of Washington were subducted during the Eocene as this was a period when North America was overriding an ocean spreading ridge. The presence of adakite may be related to the location of the mid-ocean Kula-Farallon spreading ridge at the time. The significance of adakite is that it is very unlikely that Tamanowas Rock is associated with lava segregation associated with the Crescent basalts. At least that is what I think the magma folks are saying. A summary/overview of adakite melt formation by Castillo (2006) can be found HERE.

Regardless of how well versed you are on adakite, a short hike to Tamanowas Rock provides a fantastic exposure of the adakite lava and volcanic breccia. I was a bit pressed for time so I did not take in all the rock exposures, but I also did enjoy the great view from the summit. 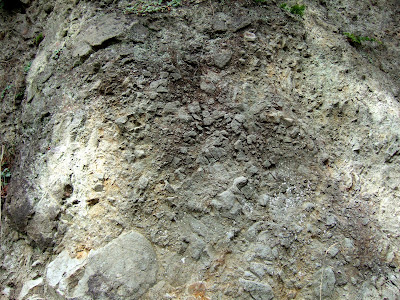 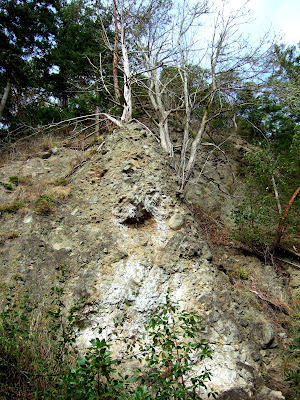 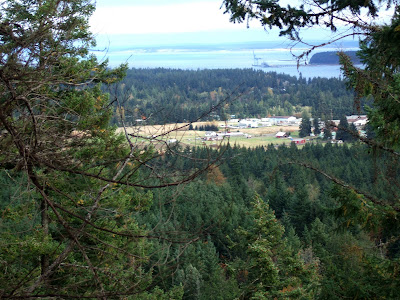 View from the summit to the northeast and Admiralty Inlet
The crane is at the naval base on Indian Island
The grassy slopes of the west shore of Whidbey Island are in the distance
While on the summit of Tamanowas Rock it is easy to see that this would be a place of pilgrimage for not only people to today, but would be a special place for First Nations peoples. The S’Klallam Tribe considers the site sacred. According to tribal elders, travelers from great distance would make a pilgrimage to the summit with nothing but a supply of water and fast for three days seeking inspiration.

Use of the site is currently in flux. The back, west side of the ridge abuts Anderson Lake State Park and can be accessed via a foot path that leaves the park to reach the summit of the rock. The property has been in private ownership for many years. Zoning and lots are such that up to a dozen homes could be built on the slopes around the rock including homes on the summit area itself. Property in the immediate vicinity of the Rock was bought by the S’Klallam Tribe. The Tribe hopes to sell the land with a permanent conservation easement that would preclude development of the property. The Rock itself and the land to the east, a total of approximately 60 acres were purchased this year using a loan from the Bullit Foundation to the Jefferson Land Trust combined with private donations and contributions from the S’Klallam Tribe. The loan is to be paid back in two years and is currently being held by the Land Trust.

All together there are a number of players involved: The Jefferson Land Trust, The S’Klallam Tribe (Jamestown), Washington State Parks and Jefferson County. At this point in time final exact ownership is uncertain and as well as management. It will be an interesting management plan to transition from a private land that was routinely used by recreationist including rock climbers to a property managed with public access consistent with the significance of the sacredness of the site and the goals and policies of the entities involved in preserving this landscape feature.
Posted by Dan McShane at 5:40 PM

Thank you for your geologic input, Dan. If you happen to know how the dacites are related, or where on SE Discovery Bay they are located, it would be of interest to me. There is also a related outcrop of this ancient volcanic breccia near Gibbs Lake, southwest of Tamanawos Rock above Discovery Bay. Perhaps, these are the dacites that you refer to? Thanks, Sincerely,
Solenne Claire Walker, geologist, in support of Jefferson Land Trust and preservation of the rock.

The dacites derived sandstone I observed was between the bay and Highway 20 south of Anderson Lake Road. Schasse and Slaughter (2005) noted an outcrop of the snadstone that they placed in the Lyre Formation to the north and I suspect that I may have been observing a similar unit. It looked a fair bit like the rocks along the Anderson Road cut slope near Anderson Lake.