President Obama created the San Juan National Monument a couple of weeks ago. The initial goal of a citizen group was to get the Bureau of Land Management lands in the islands designated a National Conservation Area (NCA). However, the NCA never was given a hearing in Congress update-on-san-juan-islands-nca. With strong local support in the San Juan Islands as well as throughout the state, President Obama acted by designating the BLM lands in the islands the San Juan National Monument. I suspect that the activists that pushed for this are feeling a bit like I did a few weeks ago about another park lake-whatcom-reconveyance-hallelujah. 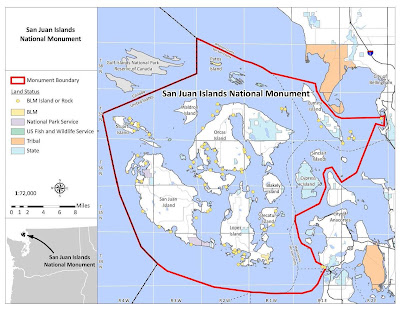 The National Monument designation only applies to the yellow BLM lands

The monument includes an assortment of small rocks and islets. The biggest deals are Patos Island on the far north of the map and bits of land on the south end of Lopez. In the grand scheme, perhaps no real on the ground substantive change; however, the designation will provide some certainty that was previously missing. There was real fear that the Lopez properties might be surplussed and sold.

Note that the National Monument includes more than just the San Juan Islands and San Juan County. Islets and points in Skagit and Whatcom Counties are part of the designation.

The boundary line of the new monument may cause some confusion, but at the same time it may be a great marketing tool for tourism. The fact that the snippets of BLM land were designated says much about the natural and historic nature of these rocky islands. The large outer boundary may also be objectionable to those that opposed the monument. Opponents fear that the monument designation will interfere with commerce and development and private land use and no assurances could ever persuade them that is not so.

It will take some logistical effort to set foot on the actual National Monument. I suspect that most visitors to the San Juans will not set foot on monument land. A boat would be the most practical manner. An exception may be touring geologists - some of the Lopez Island monument land that is accessible is also located at some great geology sites

Regardless of the monument designation there is quite a mix of other public lands in the San Juans. The park land in the San Juans is nearly as complicated as the geology. The geology is a mélange and the same could be said for the park land. The map above indicates the US Fish and Wildlife lands - mostly impossible to see on the map includes very small islets and rocks, a National Park on the west side of San Juan Island associated American Camp and English Camp on San Juan Island dating to the joint British and American joint occupation of the islands in the 1850s through early 1870s, and State Lands - which include both Natural Conservation Areas (former trust land) and State Parks. There are some terrific small county parks as well (two of which I will post on one of these days). The San Juan Land Bank as well as the San Juan Preservation Trust separately and together have acquired numerous remarkable properties.
Posted by Dan McShane at 8:41 AM

Great post. In my experience, resource management is usually as complex as geology. Too many variables.