Don Easterbrook is not a Skeptic

Near the beginning of his testimony to the Washington State Senate committee, Don Easterbrook stated “CO2 cannot possibly cause global warming. The reason is because there is so little of it. It is a trace gas. If you double nothing, you still have nothing.”

Don Easterbrook is not a skeptic. He is operating with an alternative set of facts regarding CO2. He does say that water vapor is important for controlling heat. But he has rejected  a very basic atmospheric science fact that CO2 has long been recognized as a very important heat control. CO2's role as an absorber of infrared radiation is a basic lesson in Atmospheric Science 101. One of the very first things one learns in atmospheric science is the composition of the atmosphere and that even though CO2 is at a low concentration it plays a very important role in the global heat budget.

Given, his long history of studying glaciers, I had assumed this basic science would be something Don Easterbrook would be familiar with. Too be honest I am stunned.

Kiehl and Trenberth (1997) http://journals.ametsoc.org/doi/pdf/1997 calculated that CO2 in the Earth's atmosphere absorbed approximately 40% the amount of energy that H2O in the atmosphere absorbed. The CO2 in our atmosphere,  so readily dismissed by Easterbrook, is responsible for 26% of the radiative forcing. Does he really not know this? 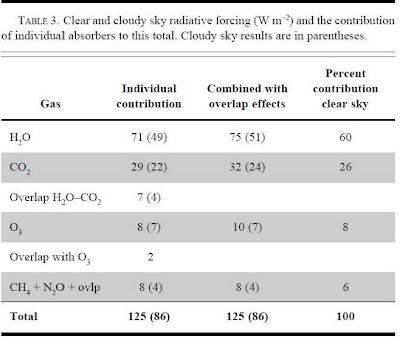 Doug Ericksen, the State Senator that has been fooled by Easterbrook's credentials had this to say about Easterbrook: “As chairman of the Senate Energy, Environment and Telecommunications Committee, my goal from day one of this session has been to operate in an open, transparent manner and allow multiple views to come forward, earlier in the session, the governor gave his side of the issue and now we’ll hear from an expert with a different viewpoint.”

My response:  1) Don Easterbrook is not an expert. 2) We are not dealing with sides on an issue. He came to the committee and presented information as though that information was fact. He has no understanding of the most fundamental fact regarding CO2 in the atmosphere. 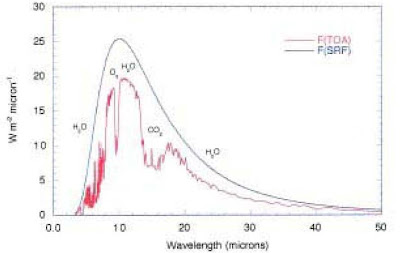 The graph above shows some important factors. The blue line is the surface radiation and the red line is the radiation at the top of the atmosphere. H2O absorbs some radiation across a broad range of the radiant heat spectrum. It also blocks incoming solar radiation. But notice that CO2 blocks a fairly broad band within the higher radiant band. This is critical, because increasing CO2 will not cause a linear effect but a logarithmic effect. Other gases that effect very narrow band widths such as O3 (ozone) are much less important.

To be clear there is room for debate and interpretation on just how much infrared CO2 blocks; there are a number of variables that alter the radiant heat such as latitude, surface material, cloud cover, angle of radiant heat, dust. The reason I linked to the Kiehl and Trenberth (1997) paper is they also include an overview of previous efforts on atmospheric heat and energy budgets and do some comparison of their results. There is also room for debate on just what increasing CO2 by 50% or 100% will do to the heat budget and how said addition might alter other atmospheric heat factors.

This is exactly the issue that atmospheric scientists took some time to reach consensus on and there is still a fair bit of debate on just how the shifting heat and energy budget will play out. It is why presentations on global warming often show a range of predicted results. Within atmospheric science there is debate regarding how arctic warming and sea ice will and or has been impacting global atmospheric energy exchange and climate. Even here in the Pacific Northwest we have had what I would describe as a bit of a nasty blowup over snow pack.

Easterbrook's premise “CO2 cannot possibly cause global warming. The reason is because there is so little of it. It is a trace gas. If you double nothing, you still have nothing” is not skepticism, it is denial of fact.

A plot you will never seen from Don Easterbrook: 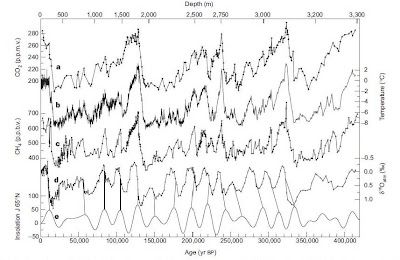 Take a good look at the top two plots showing CO2 and temperature for the Vostock Ice Core. Is there a relationship?
Posted by Dan McShane at 5:15 PM

Another great post, Dan. You could add this figure from an article by Harris (2001) and reposted on SkepticalScience.com (Fig. 1; http://www.skepticalscience.com/empirical-evidence-for-co2-enhanced-greenhouse-effect.htm)

It shows the change in outgoing radiation from the earth (measured by satellite) between 1996 and 1970. Note the bands where all the absorption is. This is the clear fingerprint of an energy balance problem, related to CO2 and Methane.

Thanks Doug. One of the points Easterbrook made in his testimony was that he had facts and the CO2 impacts were all theory. Easterbrook has demonstrated he has no understanding of CO2 in the atmosphere. I am still shocked that a glacier scientist would be so ignorant.