During his presentation to the Washington State Senate Committee Don Easterbrook put up a global cooling blizzard of what he termed as facts and graphs. His presentation triggered an editorial in the Bellingham Herald signed by every professor in the Western Washington Geology Department. I wrote up a bit of my own perspective the-don-easterbrook-problem and don-easterbrook-is-not-skeptic.

In a specific example, Easterbrook referred to a graph of temperatures from an ice core of the Greenland ice sheet to claim that global temperatures were warmer than present over most of the last 10,000 years. First, this record is of temperature from a single spot on Earth, central Greenland (thus it is not a "global record"). Second, and perhaps more importantly, Easterbrook's definition of "present temperature" in the graph is based on the most recent data point in that record, which is actually 1855, more than 150 years ago when the world was still in the depths of the Little Ice Age, and well before any hint of human-caused climate change. 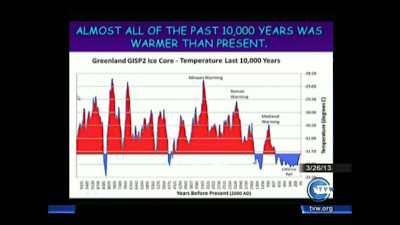 The image is not real clear as I got it via a screen shot off of a blurry TVW image of Easterbrook's Senate testimony. So I found essentially the same graph Easterbrook used in a 2010 post on a global warming skeptic blog. The graphs are essentially identical except that the clear graph shows a data source (a source that does not agree with Easterbrook).

Perhaps an innocent mistake, but....  Turns out this issue was brought to Dr. Easterbrook's attention before easterbrooks-wrong. Easterbrook's response to the wrong date issue:

OK, so Easterbrook got a little confused about the ice core dates, What's the big deal?

Note that the title of the slide is "Almost all of the past 10,000 years was warmer than the present". But he got the present day temperature wrong. I thought I might help him out with his graph so I marked up the screen shot of his Senate Committee hearing testimony. 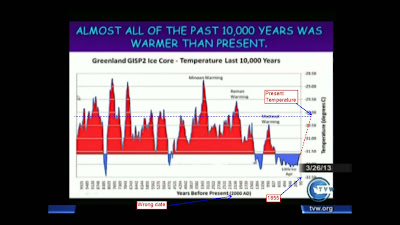 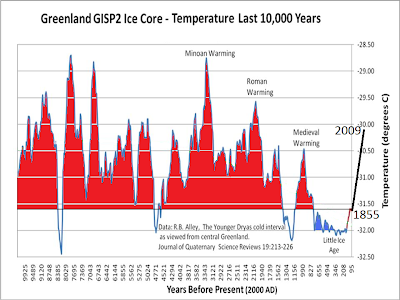 Eastertbrook has used this graph to claim before multiple audiences and now the Washington State Senate that "virtually all of the past 10,000 years has been warmer than the present". This claim is completely wrong because it is based on his not understanding of ice core temperature data and his refusal to include present temperature data on his graph. And as noted by the Geology Department, the graph does not represent global temperature; it represents one location on the entire planet. Yes, the site might reflect some global temperature trends, but Greenland temperatures vary a bit more wildly than the global temperatures and no single location should be used to determine global climate trends.

This is by no means the first time Easterbrook has managed to not reveal where present temperatures are on a graph relative to past temperature reconstruction graphs. Three years ago Don Easterbrook made a presentation where he used the following graph: 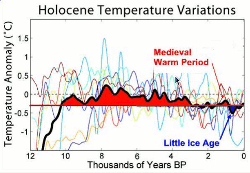 Turns out he had taken a graph from globalwarmingart.com and altered it a bit. Gareth Renowden noted the similarity his-figures-hides-the-incline,  easterbrook-defends-the-indefensible.

The original is below: 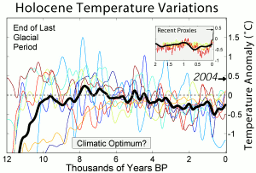 Easterbrook removed the notation from the original graph that showed that present temperature is warmer than the highest average of the reconstructed temperature histories.

This is why peer review is important. Messed up graphs like the ones shown above would be very unlikely to pass through the peer review process of any reputable journal. But I do have to wonder about motivations when present day temperatures are left off illustrative graphs because they are an inconvenient truth.
Posted by Dan McShane at 12:13 PM

Bravo! Good explanation of a complex topic, and exposure of an inconvenient truth. Plus, leaving out motivation and intentions, this is what peer review would discover.

Nice summary, Dan. These problems have been pointed out to Don more than once. I told him about the problem with the Greenland graphs(GISP2 ice core data from Alley, 2000:
ftp://ftp.ncdc.noaa.gov/pub/data/paleo/icecore/greenland/summit/gisp2/isotopes/gisp2_temp_accum_alley2000.txt) several years ago after a talk he gave at the department. Given that this is the center-piece of his contentions (he refers to it as the "Gold Standard" of climate records), you'd think he could get it right. But the historic climate change at Summit Greenland since 1855 is more than even you show (it's gone up 0.9 C in just the last 30 years: http://onlinelibrary.wiley.com/doi/10.1002/grl.50456/abstract;jsessionid=DF11D63FE78F0694EF87054982EFB1F7.d04t02).

The best interpretation of historic temp changes at Summit since 1855 is probably closer to 2-2.5 C, putting the modern temperature above pretty much the entire Holocene.

Dan. Where does the "ends at 1855" come from? That may be right for the data set Don Easterbrook presented, but it is certainly not correct that this is the top of the ice core itself. I know, since I was there, and it was 1990 when we started the drilling, so the top of the core is 1990 -- and indeed might be 1987 as Easterbrook says, since we had to clear off the snow surface to make space for the big drill dome. I'll have to go look at the original data but this may be an instance of Don being right about a detail though completely wrong about everything else.

"Greenland suggest that the annual mean near-surface air temperature increased at 0.09 ± 0.01 °C/a over the 1982–2011 climatology period. This rate of warming, six times the global average."

If Don wants to use Greenland to "disprove" recent warming, he is totally wrong.

Following up on this, here is a graph I just made with the data here:

Eric: Thanks for the first hand observations of the ice core drilling. I simply used Alley (2000) as it is the reference Easterbrook used. Easterbrook had several graphs that appear to be replicas of Alley (2000) or built from data by Cuffey and Clow (1997). Based on my limited understanding much of the purpose of the ice core data was to assemble a temperature history pre 1855 or pre instrument. The data set clearly says 95 years before present when I looked it up. That present is 1950 is not stated and I would have to say confusing for not in-the-know types like me. Somewhere and somehow a group of climate folks decided 1950 is present and somehow that got through to me after enough reading and trying to figure out what the date temperature anomalies are set on. It is confusing. That said, it is abundantly clear that folks have tried to clear this up with Easterbrook and he has not changed the graph. It is highly misleading to anyone that would otherwise not know.

Doug: To be honest I was pushing my comfort level of what is generally accepted and went with a conservative increase, but I did note that more recent papers have been upping the number. I will also add that my recent reading on Greenland climate trends was alarming.

Geoff: Thanks for your kind comments. Some other folks have done some heavy lifting regarding Easterbrook’s presentations, but when he brought this show to my local state government I felt some clarification of what he was saying in order.

I'm good friends with Alley, Clow, and Cuffey. But none of them produced a single isotope measurement and it illustrates even further how clueless Easterbrook is that he is citing Alley. it usually is good to go back to original sources.

1950 is not arbitrary because radiocarbon dating fails to work more recently than that because of nuclear weapons testing which screw up the natural radiocarbon concentration in the atmosphere.

Thanks again Eric for the clarifications as well as the link to the plot. The last thing I wanted to do was get into the details of proxies as I am sure I would say something stupid and the 1950 isotope date is an example of stuff that has leaked out of my head since my brief stint as an atmospheric science major.
My goal was to present a simple clarification as to a fundamental flaw in Easterbrook's testimony that could readily be understood. It strikes me that Easterbrook has been presenting information to illustrate with information that is purposely manipulated or purposely misleading. The more I read and learned about the ice core work and what it means the clearer that has become.
A final note - I now think I have even a better idea why scientists working in the northern latitudes are so alarmed.