The site is on a north facing bluff that rises above the shore of the Strait of Juan de Fuca. The upper, vertical section of bluff is glacial drift - sediment deposited directly by glacial ice. Pre glacial alluvial sands and silts are capped by the till. This section of bluff shore does receive fairly large waves at times as ocean swell does get into the Strait. The beach is fairly narrow and high tide gets close to or reach the base of the bluff most days.

Most of the top of bluff failures on this shore reach are likely similar to the one captured in the video. The top of bluff toppling at the top of the bluff does not extend very far into the upland, but the height of the failure does give the slide some volume. There are other areas on this reach where subtle differences in the geology below the till leads to a potential for much bigger slides, but the biggest problem on this reach is the very active erosion rate - at least relative to more protected areas within the Puget Sound. 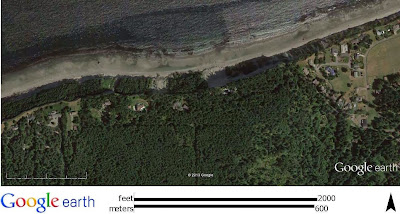 As can be seen in the Google Earth image there are a number of slides of various ages along this bluff reach. But note that there are also stands of fairly mature Douglas fir on portions of the slope indicating the recurrence interval between full top of bluff failures is on a multi decade interval.
Posted by Dan McShane at 11:04 PM