When I first visited the bluff shore below Morgan Hill in Port Townsend approximately 10 years ago, the base of the bluff was for the most part lined with past landslide debris that was well vegetated. The landslide material was acting as a wedge of material protecting the toe of the slope from erosion. But high tides combined with an approximately 2-foot storm surge and winds with waves removed a significant amount of the toe of the slope in 2006. The same storm eroded the base of the bluffs on the east side of Marrowstone Island and numerous other location in the Salish Sea. Following that erosion event shallow soil slope failures began to progress up the bluff slopes and at one location culminated in the high glacial till bluff breaking off a slab of till that collapsed onto the beach this winter.

The storm surge from this event can be seen from this plot of the February 4, 2006 tide at Port Townsend.

The height of the tide was very nearly the same although the period of 10-foot + water level was a bit longer during the 2006 event. There have been a few other similar events at Port Townsend between 2006 and 2012 with the result being continued toe erosion and shallow landslides. Due to development of the waterfront to the southeast, the beach at this location is not built up due to lack of sediment and is susceptible to erosion with subsequent shallow landslides. 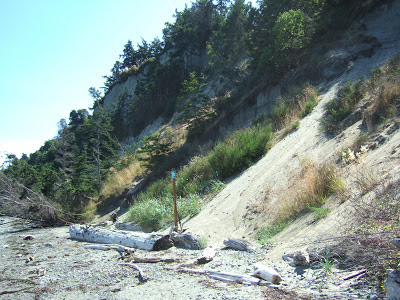 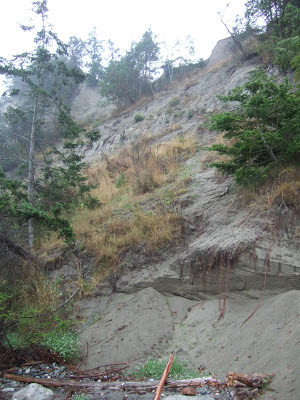 The December 17, 2012 tide measured at the Seattle gage was the highest ever recorded in Seattle breaking the previous record from January 1983. 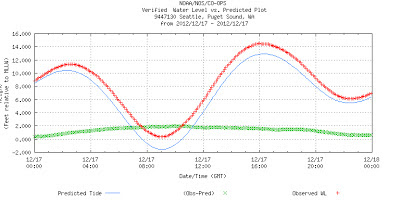 I went through this exercise as I had been to another beach that appeared to have had no erosion at all from this winter's high storm surge. In this case the beach has a significant sediment source to remain built up from eroding bluffs to the south as well as lots of large drift wood which acts as a natural bulkhead. Indeed, despite the lack of landslide debris at the base of the slope, landslides along this shore reach have been very infrequent over the past 50 years. 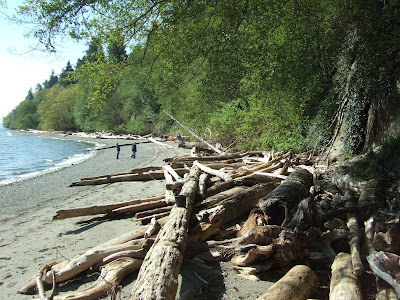 Dan, Neat observations. Both 2006 and 2012 events cleaned out the toes of many bluffs -- though as you point out there are a lot of other factors at play, too, both in terms of the amount of resulting erosion and in terms of the upslope response.

Some bluffs seem to respond very quickly to toe erosion (thick piles of recessional sand and gravel like west of Cattle Point on SJ Island, and maybe your PT example here). Others respond so tentatively (slow erosion rates, combined with very different upslope failure mechanisms), that they might as well be disconnected -- at least over timescales of several decades.