Northwest of the Port Townsend waterfront is a great shoreline beach walk with a very steep high bluff. 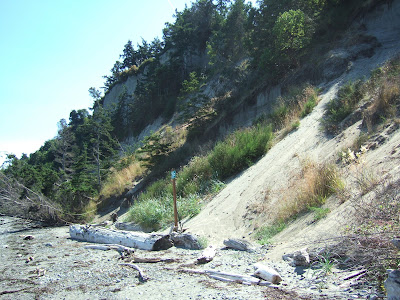 I've walked this bluff beach for work possibly more than any other shoreline. For one thing there are homes on the top of the bluff, it is a steep bluff, and it is an eroding bluff. I have not really had that may project sites on the top of the bluff, but two of them required follow up visits as Port Townsend planners are legitimately concerned about any development schemes above the bluff and due to erosion along the toe of the slope (storm-surge-and-bluff-landslides) over the past ten years landslide activity on the bluff has increased.

It is a nice beach walk and unlike many of my projects there are usually people walking the beach. An exception is during high tides when I have had to get a bit wet. Which is why this bluff is eroding - the beach isn't high enough.
While walking the shore it is easy to miss the big divot on the bluff. But with the trusty LiDAR it is easy to spot. 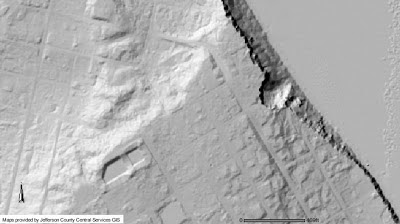 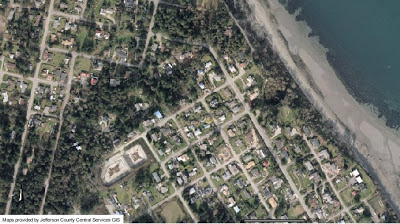 Easy to see in the LiDAR but a bit difficult in the aerial. Note the sharp square and adjacent polygon shape on the lower left. These are former drinking water reservoirs on top of the hill summit.

If your agile and the rope is still present, it is possible to scramble up into the divot, but it has gotten progressively more difficult as more erosion takes place. 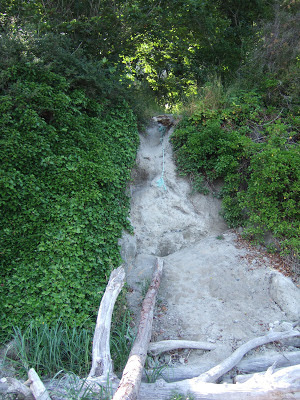 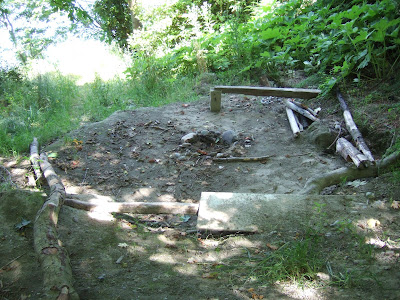 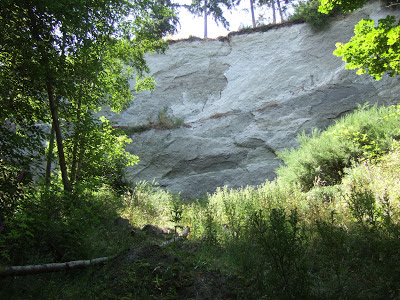 Headwall of the divot

I have never been able to confirm the full cause of the divot. I was once told by someone that the reservoir had leaked causing a flood of water over the bluff and eroding the divot. I have not been able to find a specific reference to that event, but it makes some sense as the reservoir is no longer in use and the slope above is designated on city hazard maps as a critical drainage corridor. Alternatively, it may have been a case of uncontrolled stormwater draining over the bluff face. 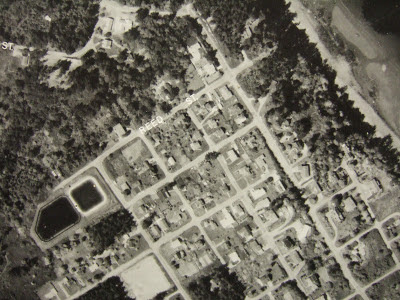 1950s aerial with reservoirs in use 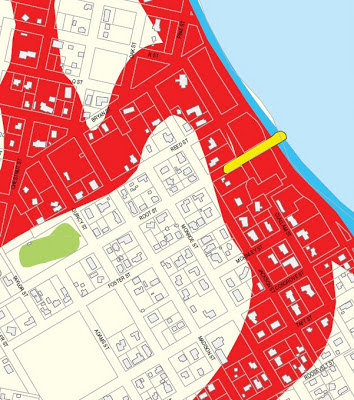 It is easy to see that flowing water across this slope would be potentially problematic and could create a divot into the bluff. While the top of the bluff is underlain by hard compact glacial till, the till is sitting on top of a very easily eroded sand with very low cohesion. 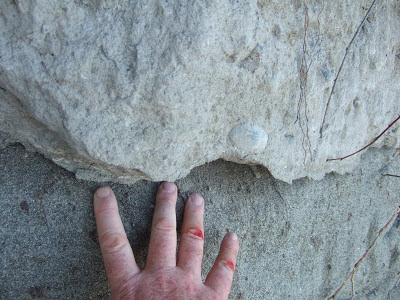 Water flow across this sand would readily mine the sand out causing rapid bluff retreat. This would particularly true if the water was flowing though a critical drainage corridor as suggested on the City hazard map.
﻿
Posted by Dan McShane at 7:44 AM

I am not familiar with reading topography images, but I wonder if you noticed the appearance of a water drainage "trough" in the LiDAR image, that runs from south to north, to the divot on the bluff. It appears to me, that the water drained north to the bluff, creating the divot. Just curious.