The western portion of the Orcas Island has stands of Juniperus maritima (rarest-forest-in-western-washington) and the species is scattered about other parts of the San Juan Islands and the islands of Skagit County. On a recent trip to Orcas Island I spotted a particularly tall specimen growing out of a bedrock bluff along the shoreline. I estimated it to be 45 feet tall. 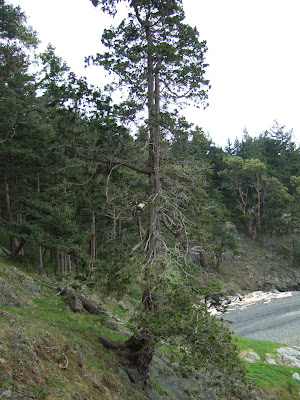 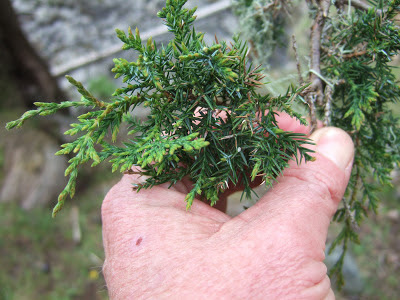 Close up of tree

A few notes on this tree. It was growing on the highly exposed bluff out away from the forest above a south facing headland. The site is east of the village of Orcas. The bedrock is tectonicaly sheared neat volcanic sand stone and mud stone of the Constitution Formation. The bedrock note relates to an affinity the tree has with ultra mafic rocks of the Fidalgo Ophiolite which was not present at this location.

The forest behind away from the shore consists predominantly of Douglas fir; however, I observed lodge pole pine, grand fir, western hemlock and western red cedar in the forest as well as red alder and on the outer edge madrone.

I also noted that the sprig of green I grasped from the lower branch shown above had the more classic juvenile very spiny foliage that protects the plant from being nibbled by deer.

I only observed one more juniper in the vicinity. Nearly 350 feet further along the shore I came across a very stressed juniper hanging down the rock. However, this one did have fruits. Perhaps a coyote or other critter will do some planting and keep these isolated junipers going. 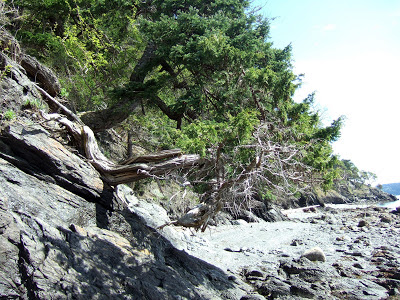 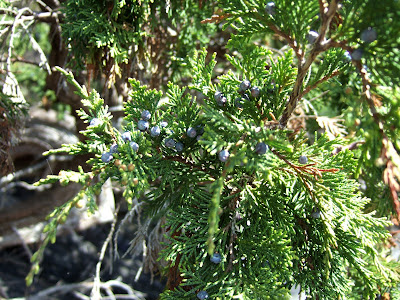 It's the "discordant harmonies" of disturbance and change that bring, maintain and sustain forests. Things have changed. The xeric (dry) sites are the rarest we have in the PNW. With changed fire regimes, invasive species and land use, things will continue to change. The RMJ is a pretty hardy tree, but its neighborhood is become more scarce. I keep looking for them on the Chuckanuts, which once had fire maintained "balds" See: http://www.na.fs.fed.us/spfo/pubs/silvics_manual/Volume_1/juniperus/scopulorum.htm

As I was talking to my friendly local tree nerds about RMJ, they quickly corrected me to explain that in 2007 this was typed as a new species. there are lumpers and splitters in the world, and I am more a lumper, and note the biophysical variation of biological diversity rather than the genetic. But the splitters prevail, and that's cool too. Looks like this is Juniperus maritma. Take that Pojar!

was there camas in the vicinity of your "rarest forest?" I'm just guessing thre was as I recognize that flavor of landscape. Unfortunately I rarely come upon a patch thats prolific enough to justify bulbicide. It might all be in my head but the seaside boulder camas that I find on the last patch of exposed grass tends to taste best.

Yes, there is camas on Turtleback within and on the margins of the rare forest.