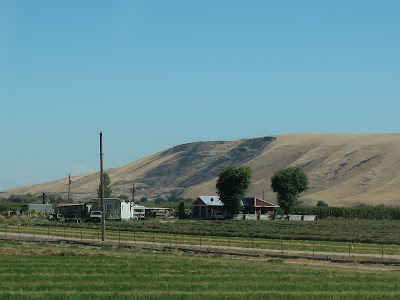 Toppenish Ridge is underlain by Columbia River Basalt Group, specifically the Elephant Mountain Member - one of the younger lava flows of the CRBG. Toppenish Ridge is one of several folds of the Yakima Fold Belt that has rumpled the lava flows of the CRBG. There are multiple landslide complexes on the steep slopes of these ridges as a result of the fractured basalt lava with weak sedimentary units in between the lava flows.

Most of the slides are relatively old. By relative, the general sense is that they may have taken place during or shortly after ice age floods impacted the area. As such the edges of many of these slides  has softened with time and weathering. But also with time and weathering and erosion, some of these steep ridge slopes will become weaker and will fail. I do not know if anyone has taken a try at dating this landslide, but is appears much younger with sharp scarps still intact throughout the slide complex. 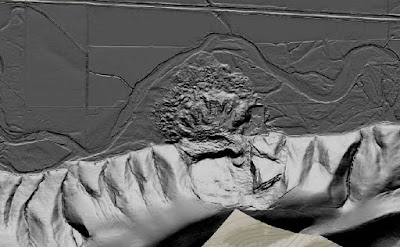 This slide got some brief media attention when the landslide at Union Gap initiated a couple of years ago. The conditions are similar with basalt overlying weak sediments. The slide is dissimilar in that this one appears steeper.