Driving east on Highway 14 from the Celilo Falls overlook (the-former-celilo-falls), I noted a boulder covered slope with a low cliff area above. 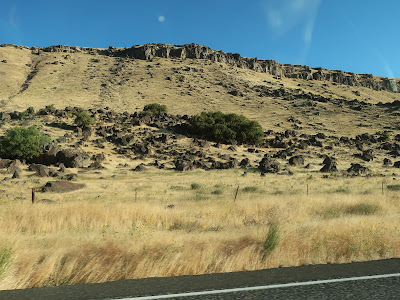 The rock is basalt. No surprise given that the location along the Columbia River and the presence of Columbia River Basalt Group (CRBG) that is exposed as cliffs and terraces all along this area. I have observed the CRBG outcrops and the appearances of those outcrops and cliffs as well as the shapes of the features eroded by the ice age floods that poured down the Columbia. 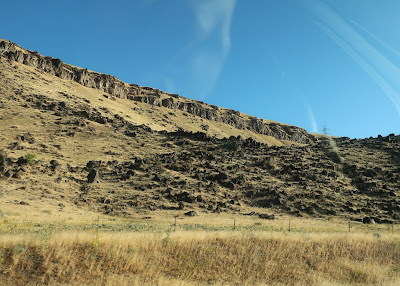 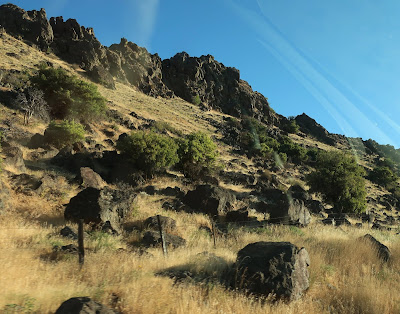 The rocks themselves are unusually dark relative to CRBG rocks. Further the pile of sharp edge boulders and very rocky slope has a shape that is not at all consistent with what what I have observed elsewhere in the CRBG. The area in question is not extensive; a brief aberration that only differs slightly from the CRBG typical terraces, palisades and channeled scab land land forms. The difference in these rocks is rather subtle that may not be of particular note.

These rocks are not CRBG, but is the southernmost lava from eruptions associated with the Simcoe Mountains volcanic field. Phillips and Walsh (1987) indicate a lava flow emanating from Haystack Butte and flowing down to the river. Their map in part adopts work by Anderson (1986) that includes an age of the flow at 0.9 million years.

The flow is part of the Simcoe Mountains Volcanic Field. Hildreth and Fierstein (2015) discuss the Simcoe Field as well as the adjoining volcanic fields. The Simcoe lavas are not part of the Cascades nor are they part of the older CRBG. The Simcoe Mountains volcanic field is not part of the Cascade Vlocanic Arc, which lies adjacent on its west. Hildreth and Fierstein (2015) conclude the Simcoe volcanics are "a distributed field of intraplate basalts, many of which have ocean-island basalt-like geochemical signatures, carry mantle xenoliths, and fractionate to alkalic intermediates rather than arc andesites". 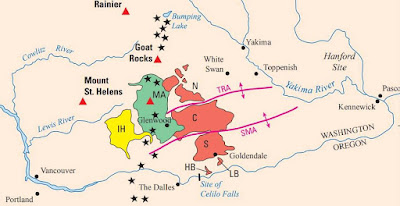