Saturday morning a large pre existing landslide let loose on the Stilliguamish River. This slide has caused trouble before, but this time it has proven to be fatal with three killed and several injured. This failure was at a much larger scale than previous events and has blocked the river. This blockage is much more serious than the recent short duration blockage on the Nooksack River a few weeks ago. Strongly worded evacuation orders have been issued for downstream residents. 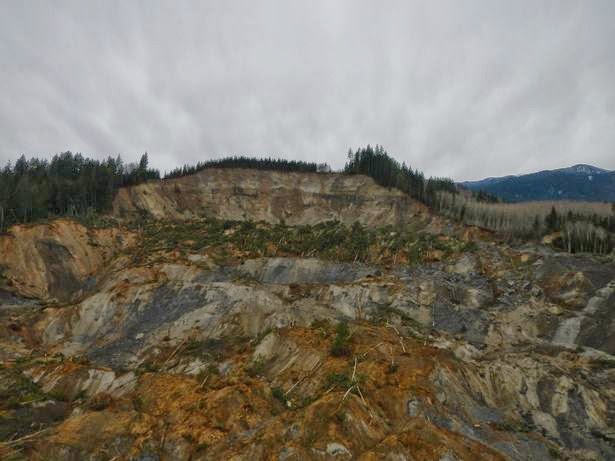 Image of landslide viewed from the south looking north up from the Stilliguamish Valley
(photo, Snohomish County) 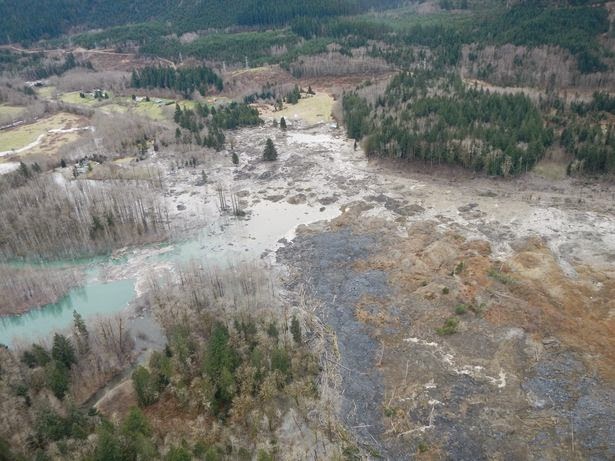 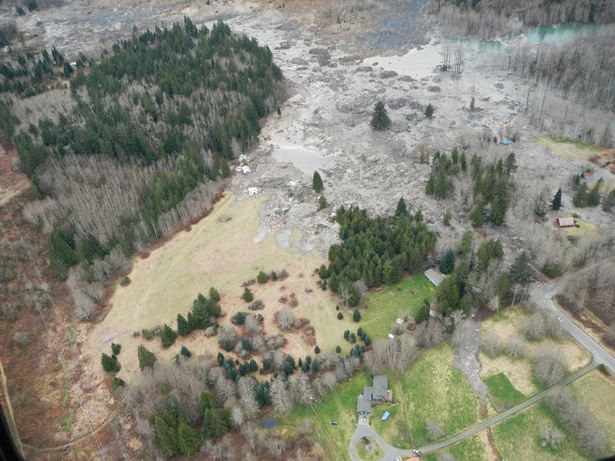 Landslide deposit (Snohomish County)
View is from the east looking west down the valley just upstream of the slide
Highway can be seen on lower right.
Brown strip on left is he electric power transmission line corridor
It appears that the river is pooling and beginning to flood areas beyond the slide area. Google earth image of landslide area
I marked the outer edge of part of the slide deposit from the Snohomish County photos.

I'll likely have more later. This slide will be well covered by the news and I am sure a variety of agency folks will provide some good rapid response assessments. I'll add some bits as I see appropriate.

What I will add now though:

2) People really should be forced to evacuate under these conditions. A river dam burst flood is not something you want to be in. Life is more important than possessions.

3) This slide was a preexisting problem. There was concern that it would block the river a few years ago. Landslide wonks knew exactly where this slide was as soon as it made the news. I looked at this slide area last summer. It was clearly bad news then and with very heavy multiple rain events the past six weeks landslides - particularly big ones are not a surprise.
Posted by Dan McShane at 9:57 PM

Dan,thanks for posting the pictures and comments. I finally figured out what side of the valley it came from.
Pat Pringle

Is there an official channel for eventual reports for an event like this? Does DNR do it, or local emergency officials?

Geoff: I am sure there will "official reports" of some sort. This could be a bit tricky though as this slide has had lots of policy implications already before this event took place and it now will have even more.

Great blog entry. As one of Doug Mckeever's students I couldn't help but look up the slide area on google earth and a soil/bedrock map... http://home.comcast.net/~wa_geology/q204_frames.html

This absolutely should have been evident to the people living in the area, public works/emergency management should have made the residents aware of the danger (if they hadn't already). A terrible and unnecessary loss of life and property.

Zoomed in on Google Earth at the location of the image you posted and you can actually see the outline of the slide area (bare earth/rock?) that lines up with your red outline. As you say, it looks like this had been slipping for a while. Thank you for posting this Mr. McShane. Very informative!

Thanks very much for this info; another very good example of geohazards and how we ignore them; I hope the flood isn't too bad (that's my area.)

It was absolutely stunning to read the Seattle Times 'WatchDog' article this morning and realize how many historical warnings and indications there were that this area was extremely dangerous to live in. Classic multi-agency government failure that will eventually costs nearly a couple hundred lives. Touching human interest stories as well.
http://seattletimes.com/html/localnews/2023218573_mudslidewarningsxml.html

This LiDAR image posted on the Seattle Times front page yesterday shows a whole series of arcuate features indicating what are probably major prehistoric landslides. If that's the case. building should be prohibited throughout the area.

but there is a magnificent piece of forensic deconstruction based on Google Earth on Youtube now,