Aerial History and LiDAR of the Stilliguamish Blocking Landslide

Aerial and LiDAR images explain a great deal about the landslide that blocked the NF Stilly (geology-of-silliguamish-blocking-slide and arm-waving-notes-on-stilliguamish). The LiDAR particularly shows the extent of past sliding and the scale of the past landslides. This leads to policy issues, but I will save that for a later day or two or week. 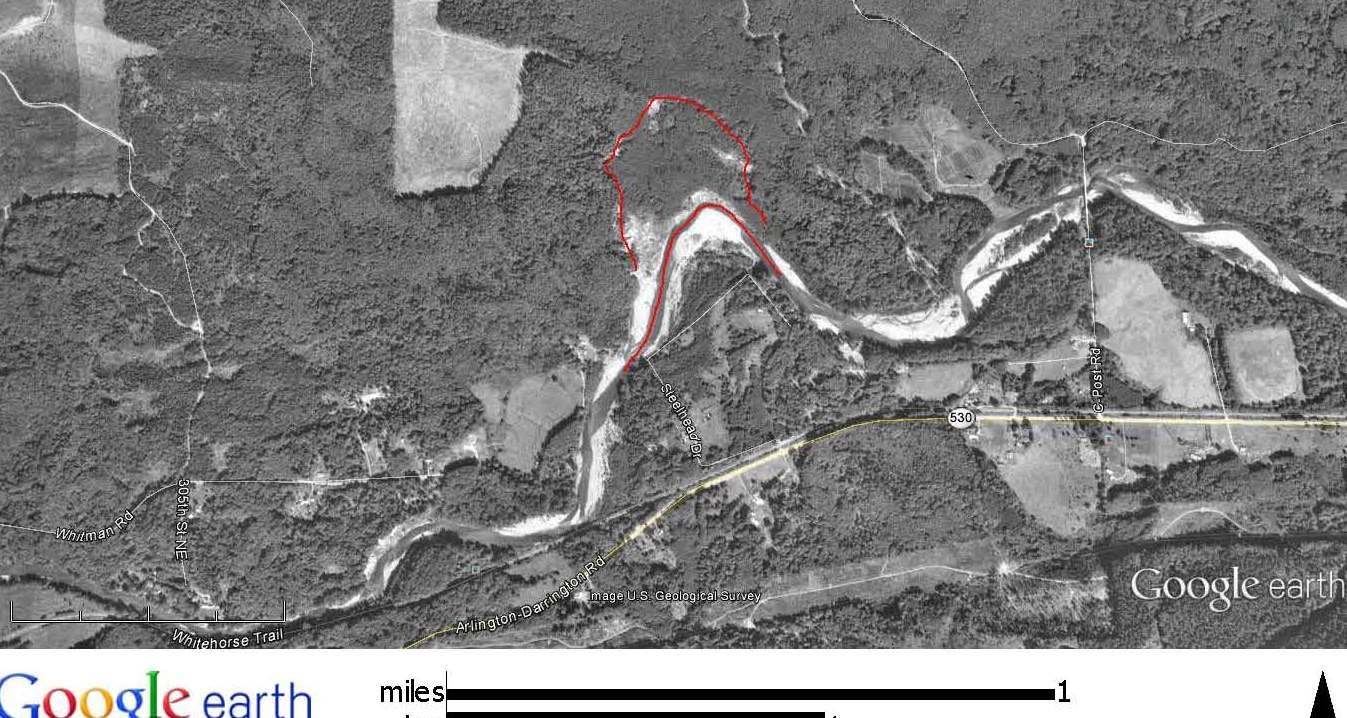 This first image is from 1989. I marked in red the river route in 1989 as well as outlined the slide activity at that time. Obviously the river is eroding the base of the steep slope setting up an unstable situation and the ground is starting to unravel. Note the relatively new clear cut harvest. There have been and is ongoing debate regarding clear cut harvest and water infiltration into deep-seated glacial sediments in part triggered by this slide but also another set of slides in deep steep canyons elsewhere nearby. In this case, I will offer an opinion that the river erosion at the toe is the big driver of slope instability. 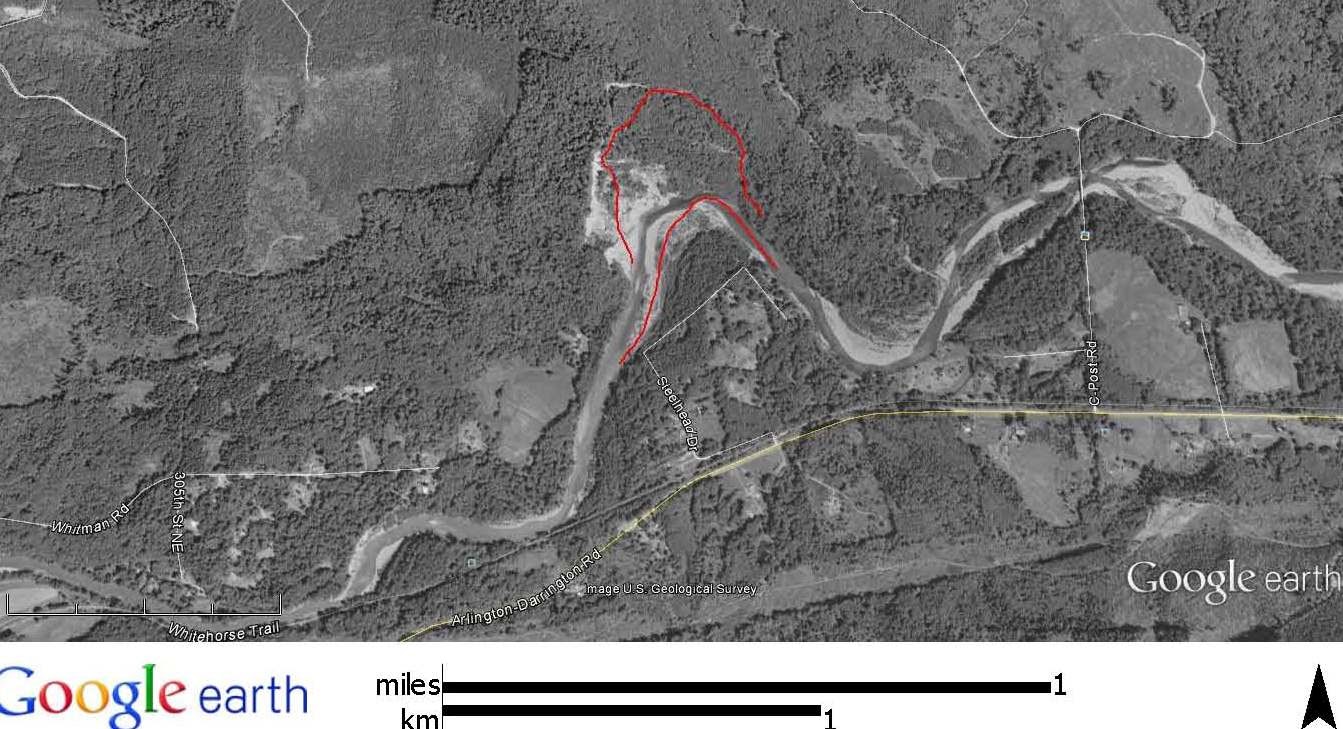 This image is from 2003. As can be seen the river and slide area has shifted a bit westward. This image is before the slide that took place in 2006 that blocked the river channel in a very similar manner to the Nooksack River blocking event of 2014. 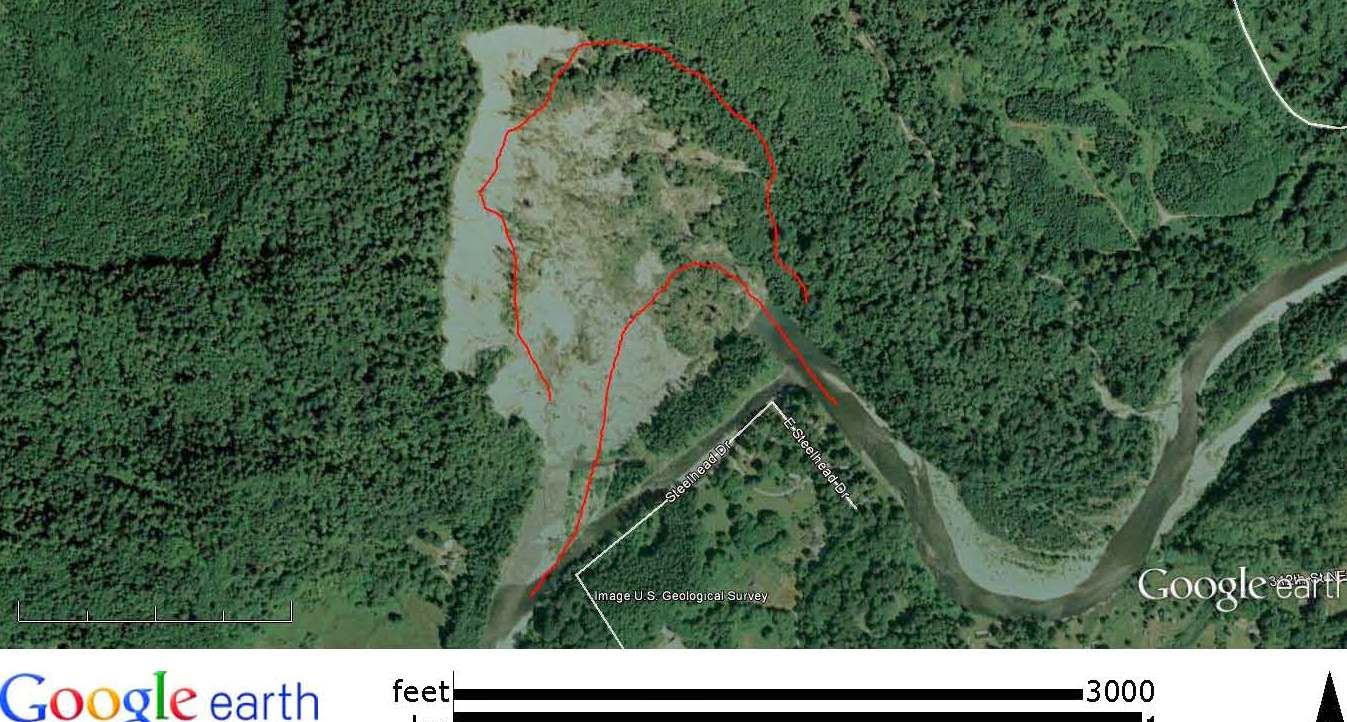 This image is from 2006, post river channel blocking slide. The river has a new channel as it was deflected southeast by the mass of slide material. Note how much the slide has expanded westward. What can not be seen is that the west slope of the slide is much higher in elevation and thus contains a lot more volume. The new channel was partially excavated and rock lined by the Army Corps of Engineers to maintain flow away from the landslide toe area. Also note how much the river had been pushed towards Steelhead Drive. 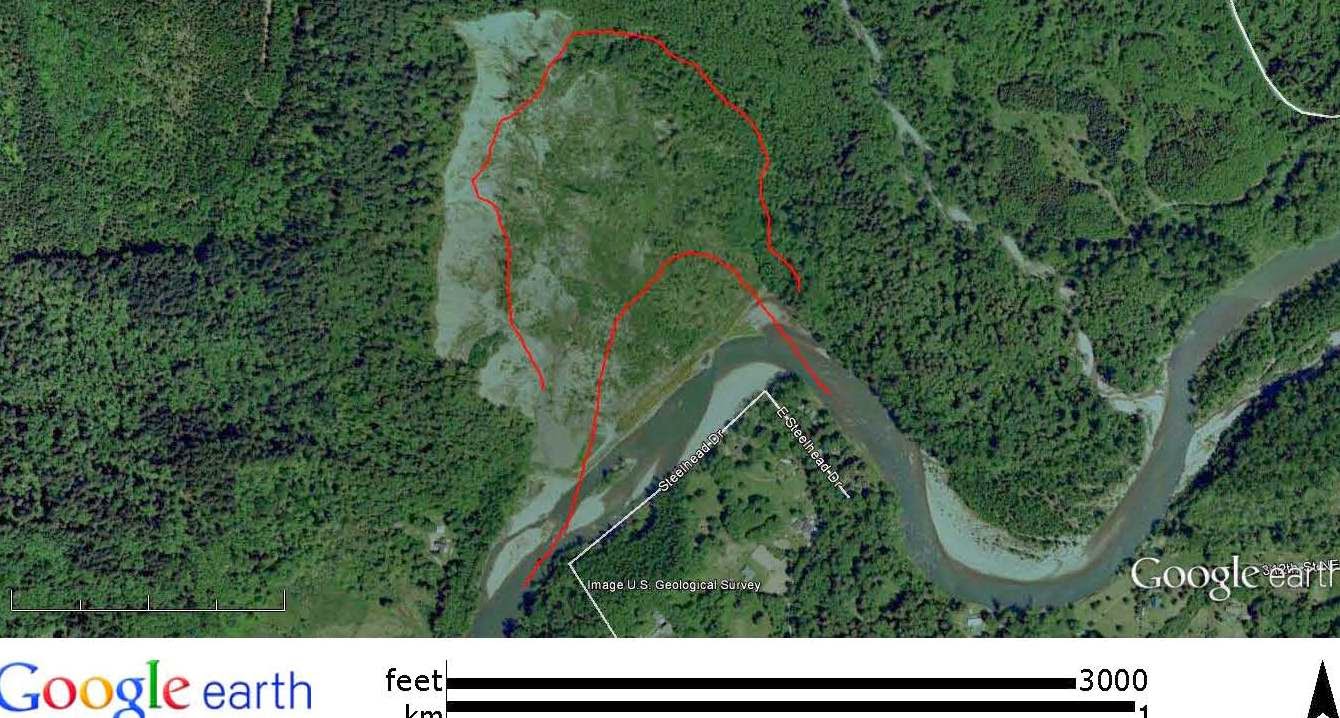 This image is from 2009 and shows the slide area is greening up except for the steep headwall scarp on the west limb of the slide. Note as well the straight line edge of the river channel on the slide side of the river. The channel has become wider than the 2006 channel due to erosion and the straight edge river bank is an engineering effort to contain the northwest directed erosion. This image is also from 2006 and shows active stream channel work taking place. I am not entirely up on the project, but it was part of mix of salmon recovery and hazard management work conservationregistry.org/projects. 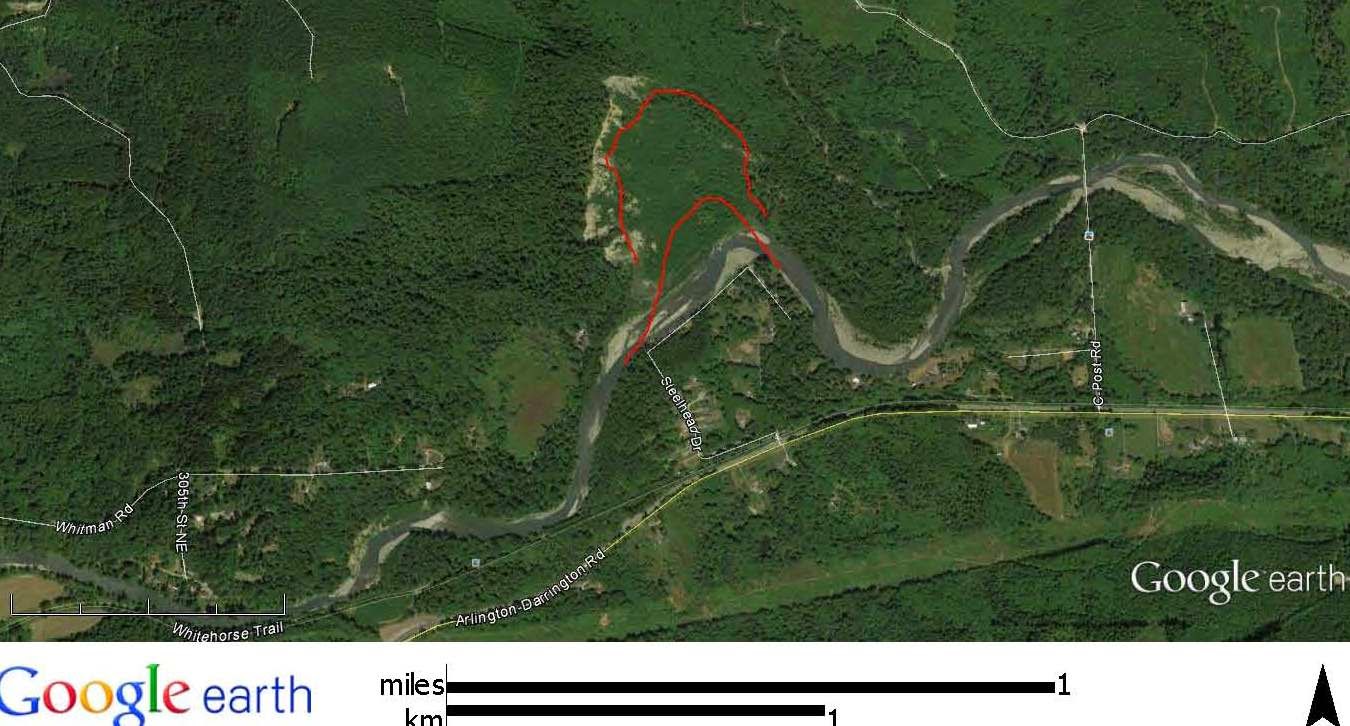 The 2013 image shows that the main body of the slide has greened up more. But note the headwall on the west side is still bare in part because it is so steep. However, part of the bare ground is the result of headwall collapses dumping material onto the unstable slide mass - not a good thing and it is what I observed when I took a look at this slide last summer. It was still active and clearly not done.

LiDAR is a great tool for assessing landslides. The bare earth images have made mapping large landslides and large landslide deposits an office exercise with focused field trips. The active slide area is easy to see, but there is so much more to be gleaned from the LiDAR in regards to scale.

This first image marks the active slide area at the time of the LiDAR in red. Blue arrows indicate the river flow. The orange line marks the boundary of an older headwall scarp. The area between the red line and orange line had not been actively sliding over the past 20 plus years, but that scarp indicates that some time in the past that area was likely part of a big landslide. Based on the Seattle Times images, I suspect that this area between the red and orange lines may have collapsed and the pre existing deep-seated slide may have expanded. This area between the red and orange lines and just where the new headwall scarp is located is my main interest as the pre failure and post failure geometry may provide some geology slope stability lessons. A hard and costly lesson.

This next LiDAR image pulls back away a bit to show the bigger picture of the slope stability of the area.

The smallish red marked area on the right is my estimate of the active slide area. I did not include the deposition area of the slide as I don't have a good image yet, but can say that the deposit extended clear across SR530 on the map.

The larger red outlined area in the central portion of the image is from a much larger slide. The deposit area from that slide was even bigger than what is indicated, but the southern end has been eroded and removed by the river. It would be very interesting to know how old this slide is. And also might be informative to look at the geometry of the headwall area.

Where did you get the LIDAR imagery?

Dan, check out this image from SnoCo, particularly how the river - pushed southeastward by previous slides - has recently been running right through the one-time platted lots.

I doubt there will be any future development in this area, and I assume even the surviving existing property owners who got their homes/land wiped out won't want to redevelop here after this event.

The LiDAR can be obtained via Snohomish County SNOCAP map. Its a nice system but takes some navigating to get to.
Thanks Sam. The 2006 slide too out all the lots northwest of Steelhead Drive. There were new homes built on Steelhead in 2006 but to the southeast. They are very likeley gone. Based on the maps I looked at the only criteria from a hazard perspective was flood levels - but that is a whole new post.
Thanks for the link Scott - it will be interesting to see how fast the river cuts through this blockage. I am impressed how long the water has been backing up.

All: What an excellent resource -- and one that any builders or public officials in the area should review and understand. Given the age of he events and their ongoing nature -- sad too that GB InSAR was not deployed to have a look at the headwall area mentioned. Itinerant geo-coded scans over seasons and during periods of heavy precipitation -- could have likely addressed the issues of loss of life -- given this was an active area.

Hi Dan. I was directed to your blog this morning, and it's fantastic. Thanks for this.

Yesterday I was looking at the big failure that you mention in your last image. It looked to me to be multifaceted; the headscarp appears to have three separate concavities, with the most recent being the one in the center. This would correlate well with what's going on in the most recent Oso slide, where large-scale events keep occurring in the same place over a relatively short amount of time.

Hi Dan, thanks for your posts.
Here's NY Times coverage: http://www.nytimes.com/2014/03/25/us/search-continues-after-washington-state-landslide.html (I appreciated the map that details where the houses used to be.)
~Grace

Thanks, Dan. Your observations and the follow-on comments and information are extremely interesting. The timing with the Nooksack slide are very interesting as we are working on Reach 4 to determine what we can do long-term about the levees.
David

In addition have to wonder if 06' Tree clearing for new channel, then used for barrier as "Large Woody Debris" with tons (not sure quantity) of rock & concrete abutments (Rip Rap Army Corp & County) combined with the force of the water, mud & debris coming down the hill precipitated by water force from above isn't what really decimated the homes opposed to just water, mud & debris (landslide/mudslide)where damage may have not been as great.

Hi. This is a great site. Thanks for doing the work to put these images together. One thing that strikes me after seeing the outlines for the planned housing development on Steelhead Drive (which is now wiped out): Who, in their right mind, gave approval to those plans, knowing that a slide had occurred just eight years ago directly across the river, and knowing that there is an active history of slides in that area? If this slide had occurred two years from now, after that development was further built out, the death toll would be ten times as high.

Nice posts on this, Dan. Apparently there's an effort to refly the site with Lidar to help with the S&R (or more likely, recovery at this point).

Thank you for creating such an informative blog, as a Washington resident currently fighting to prevent the County and DNR from expanding gravel mining operations into sensitive areas on our mountain (including a superfund site) I have lost a lot of faith in local government always acting in the best interests of their citizens and the environment. This mud slide history is interesting indeed, especially after seeing that on the news this evening they are blaming the whole thing on an earthquake. Again thank you for sharing this information with us all!

In looking at references for the Wikipedia article updated on 4/27 on the Stillaguamish River slide, I came upon this interesting website that contains topo maps and some aerial photos of the landslide site. One especially interesting….and alarming….image is one taken in 1933, where you can see a “whitish” curved zone in the vicinity of the recent slide. It isn’t clear to me whether the scarp (the slightly curved gash, whitish because it is free of vegetation) in the middle of the image is the head scarp from a previous slide, or the beginnings of a slide-to-come. But as geologists have known all along, this material in this setting is slide prone, especially when being undercut by a river cutbank and when lubricated and saturated in groundwater and soil moisture. Note that you can’t see any homes on the inside of the large meander. Why oh why were homes allowed to be built in the area that became Steelhead Drive?
http://www.historicaerials.com/aerials.php?scale=6&lon=-121.85849656687999&lat=48.283683958846765&year=2006

Excellent coverage, Dan. A powerful public service to see the anatomy of the whole geologic - hydrologic - public policy stew out there in front of us.

Is it time to re-awaken Whatcom County interest in the inventory of over 100 potential landslides and debris flows right here that we did 20 years ago? And in subsequent investments in examining a much smaller subset of places where the dangers seemed most imminent? A time series comparison of the subsequent building and land use changes in those places would prove sobering. In light of the Stilly, what policy changes might result?

Can anyone confirm this is LIDAR? It looks like faux hill shading from topographic maps.

OK, answered my own question, there was a popup describing the data source "high-resolution aerial laser scanning and field observations by County biologists..." What a great resource across the county.

Observing the tragedy from north of the border, our thoughts are with the families.