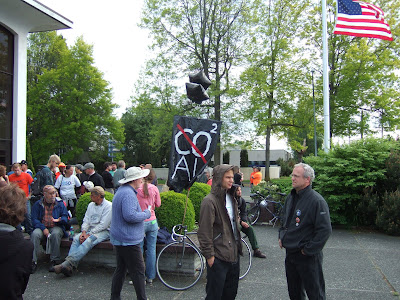 I did a couple of posts on the coal terminal situation in Washington State in February coal-terminals-in-washington-state and coal-terminal-preemptive-strike. Since that time the proposed coal terminal in Longview has been withdrawn and the community resistance to the Longview terminal project has apparently grown. In Whatcom County SSA Marine has been running an intense PR campaign for a terminal that has yet to submit an application.

Last evening a public event was put on by the City of Bellingham to hear what issues people may have had regarding the project. John Stark at the Bellingham Herald reported on the event HERE. At least in Bellingham, there appears to be very strong opposition. I went to the meeting and it appears that this project is facing some of the broadest and strongest opposition I have seen for any potential development project in this area. I was unable to get in the building as there was a large overflow crowd.

Mr. Stark quoted a local labor union leader Mr. Warren (new retired) who has come out strongly in favor of the coal terminal including being pictured and quoted in advertisements in favor of the coal terminal. Mr. Warren was clearly agitated at the strong opposition. It can not possibly be a pleasant situation for him and a few other community members that have been advocates for the coal terminal. I spoke with him outside after the meeting. He wanted to assure me of two things: he really wants those jobs and he wants a full environmental review.

The problem he faces though is that SSA has thus far indicated that not all of the environmental impacts that some would want to include in a review of this project should be applied to the project. Just one major impact that SSA stated that they felt should not be included is the impacts from the rail traffic - a big deal on a local issue as the trains must pass through Bellingham immediately next to an area the City would like to see redeveloped. Other communities will be impacted by the increased rail traffic as 30 one-mile long plus coal trains day would pass from Spokane south through the Columbia Gorge and then from the Portland area up through the lowland of western Washington to Cherry Point. I am fairly sure SSA will not be too keen on having CO2 emissions included in the evaluation of the project either.
Mr. Warren was quoted as saying "environmentalists' hostility to Gateway Pacific has destroyed the alliance between them and organized labor". As I noted in those early posts this issue can be described as "A nice divisive issue to pit community folks against each other". Indeed that spilt has become very real. But based on my experience, local labor leaders may have broken that alliance a long time before this project came along, but that broken alliance is now starkly exposed.
Posted by Dan McShane at 6:16 PM

Dave Warren has spoken eloquently on the merits of revitalizing Whatcom's industrial base, and of the importance of breathing new life and uses into Whatcom's only industrial zone. He understands that strong union-based labor is the surest road to the 'American Dream' for many families.

But I think he misstepped--as you observed, Dan--in response to a steady stream of seeming opposition to something he believes in very much.

I think that stream was initially charged by a sense that none of our elected leaders were apparently going to champion an oppositional view. SSA Marine has proven powerfully gifted at lining up official support for their project well in advance of its details. So there was some pent-up frustration in the crowd that no one elected to lead was showing leadership in representing their views.

The stream was ignited by Warren giving voice to something many people unconsciously understood, which is at some point there must be a break in unified support for this proposal. And that that break would be irreconcilable among polite people.

Warren did the same thing back in the days when the Georgia-Pacific mill was closing, passionately declaring war on the environmental community in support for that union Labor. He enflamed the division, and he tragically ended up on the wrong side of that history.

My sense is that, whether this coal facility goes in or not, it also is on the wrong side of history.

I do not recall much strive when GP actually closed. But there was strife when GP brought in temporary diesel generators to power the mill due to the Enron power shortage. A truly horrible experience for all. The generators were turned on during the worst possible wind conditions - moderate steady wind from the northwest. The wind sent to air plume from the generators straight into the side of south hill.

Hi Dan,
Just trying to figure all this stuff out. Thank you for keeping up on this issue. Stumbled on this by Jean Melious through the Bham Herald politics blog. Lots of links to get to documents.
thanks again.

Your blog is terrific!
Terri Plake