For readers into deep policy on the Bellingham Bay and Whatcom Waterway Cleanup this is the last chapter for now.

The Port's cleanup plan of capping most of the mercury contaminated sediment in the waterway and bay and excavating the ASB in preparation to converting it into a marina was initially estimated to cost $44 million. However, the Port cost estimate must be altered because of updated dioxin rules for sediment disposal sites in Puget Sound.

The US Army Corp of Engineers recently updated standards for in water dredged sediment disposal in the Salish Sea. Port facilities have to periodically dredge to keep shipping lanes open. The Corp has identified areas in the Puget Sound and Slaish Sea where dredged sediments can be disposed. The Corp developed new dioxin rules for dredge disposal sites that preclude using those sites if dioxin levels of the dredged sediments are above certain levels. This new standard will impact how dredged sediments will need to be managed. In addition Ecology has changed its sediment standards for dioxins in line with the new information used by the Corp.

These new standards have significantly impacted the costs and approach to the Port of Bellingham's cleanup plan for Bellingham Bay and Whatcom Waterway and the Port recently submitted an amended cleanup plan to Ecology  www.ecy.wa.gov/pubs/1109121.pdf. 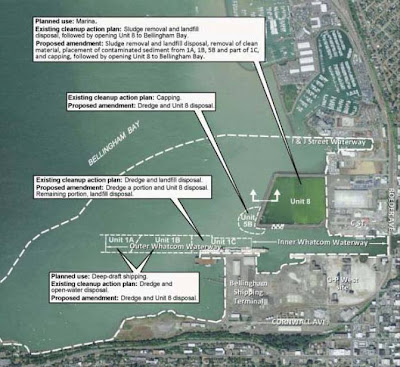 Amended cleanup plan (Ecology)
The new dioxin standards means that some of the sediment that the port wanted to dispose of in open water areas can no longer be disposed of in that manner and some additional areas that were to be capped now will need to be dredged. The Port's new plan with Ecology's tentative approval is outlined in the above picture. The new proposal is to excavate the ASB to a greater depth than needed for a marina and disposing the dredged sediment in the ASB followed by capping the dredged sediment and then opening the ASB to the bay for use as a marina.

This amended approach has been estimated to more than double the original estimated cost of the cleanup from $44 million to over $90 million. During the public comment period for the proposed amendment several citizens suggested that Ecology conduct a new Disproportionate Cost Analysis. A reasonable request given that Ecology had determined that an alternative cleanup plan estimated at $74 million was "not practical" and "incremental costs are substantial and disproportionate to remedy benefits".  At the public meeting the Port and Ecology did not indicate they were interested in doing such an analysis.

Given that response, I did a rough analysis using the diagram the Port and Ecology used during the review of the original Port cleanup plan. At this point I should add that I am of the opinion that the Port and Ecology very much need to do this analysis given that the cleanup plan is hugely expensive and will involve Port tax dollars, MTCA funds from state taxes and will have profound impacts on how a large area of the waterfront redevelopment progresses. I still hold out some hope that the Port and Ecology will do this analysis. In the interim I did a quick and dirty analyses of my own and would gladly stand corrected if more detailed analysis shows my estimates are substantially off the mark. 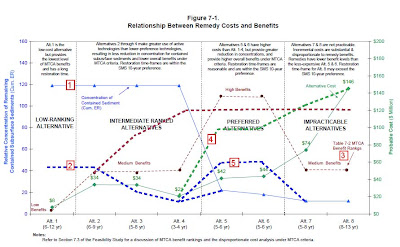 Port's Cost and Benefit Chart for Proposed Cleanup Options
Heavy dashed lines and red numbers added by me
I posted the above chart from the Port's cleanup plan on a previous post. I placed numbers at five locations on the chart and discuss those areas of the chart below.

It should be mentioned that the Georgia-Pacific's Alternative J cleanup approach most closely resembles Alternative 4 in the chart. I was not able to fully resolve exactly how comparable Alternative J was to Alternative 4, but it is reasonably close. Remember Alternative J entailed dredging nearly all the contaminated sediments in the waterway and bay and placing the sediments in a portion the ASB. The Port Alternatives 5 and 6 (noted as preferred on the chart) involve primarily capping of the sediments in place and dredging the ASB as a marina. I added new lines on the chart to reflect that new amended plan will involve disposal and burial of contaminated sediment beneath the marina. I also take a somewhat different interpretation on some of the values the Port and Ecology used on the original chart that in my opinion a more accurately portrayal of the actual values.

Number below correlate with the chart above.

2) As explained above, the ASB is an upland site and the material in the ASB therefore is not sediment. Alternatives 1 through 4 all assume that the ASB remains an upland site. The thicker blue dashed line has been added to the chart to illustrate this different interpretation.

3)The benefits are presented with a line on the chart that references a Table 7 MTCA benefit ratings. The ratings are in many regards subjective and several of the benefit ratings have nothing to do with cleanup. One example would be that the ASB use as a marina is ranked as a higher benefit than the ASB being used as an upland site for development. Certainly marinas have benefits, but so do 37 acres of level readily developed waterfront property with a seawall that prevents lateral spreading in the event of a major earthquake. Ask different people and you will likely get a different view of which is more beneficial. The thicker dashed lines are my subjective benefit analysis using the same chart where equal benefit was given to 37 acres of developable land (alternative 4), the marina, and the continued use of the waterway as federal shipping channel.

4) This line shows the cost. Since the chart was developed, the port has found that the costs of Alternatives 5 and 6 are well over 100% higher than they initially anticipated and the added heavy green line reflects that the costs are now in the $100 million range.

5) The Port has recently proposed altering the preferred cleanup plan. As such the amount of contaminated subsurface sediments will essentially remain the same. The sediments will now be buried in an aquatic disposal site underlying the marina.

The new higher costs leave a significant degree of uncertainty to exactly how the waterway and bay cleanup will proceed. If the plan is significantly altered there could be large changes in water front redevelopment plans. The information that Puget Sound Energy has no intention of closing a gas turbine electric power plant and the increase in rail freight passing through the water front area combined with a different cleanup plan will impact the future landscape of Bellingham's water front.
Posted by Dan McShane at 10:55 PM

Excellent, and long overdue analysis! The unmentioned elephant in the room is the insurance agreement between POB, G-P, and AIG. The original agreement specifically excluded any costs associated with re-purposing the ASB (it was claimed the new marina would pay its own way, and no additional subsidies would be necessary). Now that the condo/marina bubble has burst, leaving POB on the hook without insurance for the ASB, we are seeing a scramble to pull taxpayer (and AIG) funding into the ASB. The new dioxin rules are a convenient cover for this. Nothing wrong with this--as long as the decision is made in the open, with full disclosure of the liabilities that are being assumed.

Dan, I love your coverage of the Whatcom Waterway Clean-up. Its not getting enough press, and as some one new to the issue, your blogs are providing the background info I was missing. I hope you will consider writing about the Cornwall Landfill Interim Agreement. Why are we spreading dioxin around a site planned for a public park, shoreline trails and commercial and residential development?
Wendy Harris

Wwendy: Thanks. In terms of placing harbor dredge sediment on the upland area above Cornwall keep in mind that sediment standards are not the same as soil standards. Contaminants in the water pose a greater risk. I think the landfill cover approach to minimize water flow through the landfill material is reasonable, but I am not up to speed on the characterization of the waste and what other plans are being considered.